About 1/4 mile south of the Spotted Bear Ranger Station, on a bluff along the east side of the South Fork are the remains of a "dugout" canoe that was never finished. The ponderosa pine tree stump stands near the hewed log.

In the spring of 1904, Charlie Fair, trapper, had his camp near the present site of the KNL resort, where he and his partner, Ora Reeves, had been trapping the previous winter. They planned to make a canoe and use it to take their furs down the South Fork.

Fair built a makeshift raft to cross the Spotted Bear River to get to the canoe location. The river was running high during the spring thaw. He was crossing alone when something went wrong; the raft turned over and Fair was thrown into the water. The last Reeves saw of Fair was when he was swept into the main channel of the South Fork, around the vertical cliff at the mouth of the Spotted Bear River. His body was never found; the canoe was never finished.

Reeves packed their furs out of the wilderness. But Fair's dog would not follow Reeves. The dog was never seen again. 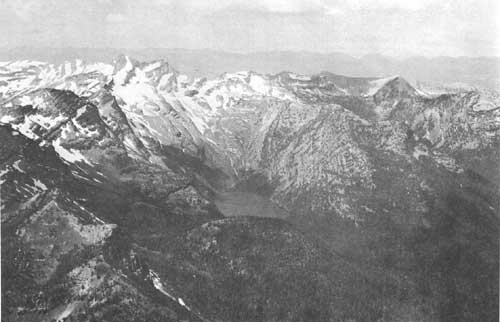 Sunburst Lake and Swan Peak in the Bob Marshall Wilderness.