The most spectacular forest fire I have ever witnessed was the Heaven's Peak fire of 1936 in Glacier National Park. After this fire had burned for several days, the winds came up and the Forest Service was asked to assist Glacier National Park in suppressing the fire. It was burning on a high plateau that sloped to McDonald Creek to the east.

My first assignment was to take a crew up the cliffs to the top of this plateau. We had to use ropes in nine places to make the top. Some of these stretches were for 150 to 200 feet. This area is called the Granite Wall. We made it to the fire, but we were not in sufficient numbers to accomplish much. However, we were on the back side of the fire and made some progress in flanking that end. But the front of the fire, where it dropped off into McDonald Creek, was too much for the crews working that end. When high winds came up in the afternoon, the fire took off.

At about this time, I met Supervisor J. C. Urquhart on the fire line. He asked me to go with him to scout the head end of the fire near the Granite Chalets. We went to camp, got his car, drove to above the switchback on the Going-to-the-Sun Highway, and hiked to Granite Chalets, and on north to the north side of the fire. It didn't appear to us at that time that the fire would gather enough momentum to jump the Garden Wall and threaten the area of Swift Current Valley on the east side of the Continental Divide.

We were wrong and realized it in just a few minutes; the fire blew up in McDonald Creek proper, just below the switchback. (I believe this area is known locally as "Packers' Roost.") We just had time to make it back south along the Garden Wall through the thick smoke ahead of the fire. Flames were leaping 2,000 feet into the air, with tongues of flame licking outward for 200 yards from the main flames. The roar of this fire was frightening. Tom Wiles and Casey Streed became concerned about us and met us as we came down toward the road on the south side of the fire.

When we reached the road, we found the car still above the fire but we couldn't go back to camp on McDonald Creek as the fire was burning across both legs of the switchback. I told Mr. Urquhart that if he wanted to cut through to the road below the switchback and go on into camp (a distance of about a mile) I would take the car around and come into the camp from below. He said, "O.K." and we separated.

It was a long way around by St. Mary's Lake, East Glacier, Java, Belton, and back to our camp on McDonald Creek just to cover that mile back to camp.

When I got to the top on Logan Pass, I found a lot of people watching the fire from this vantage point. The Park officials were, of course, not letting anyone proceed to the west beyond this point. I stopped there for just a minute to look back on what was going on down McDonald Creek. I encountered Joe Dzivi, a Forest Service employee, who was bringing in a load of supplies from East Glacier. While we were exchanging remarks about the fire, a lady stepped up to Joe and said, "Mr. Ranger, how do you go about putting out a fire the size of that one?" Joe replied, "Lady, that's just what we are trying to figure out." Joe's answer may not have been the best from an Information and Education standpoint, but it sure was the truth.

It was late when I got back to camp. Most everyone was sleeping. There were about 500 men in this camp. The kitchen was open so I got something to eat, located my pack sack and bedroll, and bedded down by the side of the car I had just driven. I put my packsack and clothes inside the car for safekeeping. When I awoke the next morning, the car was gone. Supervisor Urquhart had been called to go to Many Glaciers, had located his car, saw me sleeping there and had quietly driven away not knowing my clothes were inside.

So, there I was out in the middle of Glacier Park with a crew of men to take out on the fireline and all the clothes I had was a pair of shorts. My Flathead friends came to my rescue. They dug into their packsacks, and soon I was fully clothed. The timekeeper loaned me a pair of calked boots. Urquhart returned to camp that night with my own outfit.

I was in charge of a sector of that fire for about three weeks. This fire burned about 7,500 acres, which is small compared to many of the larger fires. But it was by far the most spectacular forest fire I have ever seen.

No human lives were lost on this fire. Most of the crews in the area that blew up were Civilian Conservation Corps boys. When their foreman realized their situation, he gave orders to drop most of their tools in the trenches they had built and follow him. He lead them into a burned area that was hot but safe. The men stayed together, nobody panicked, and they were all led to safety. Had they panicked and scattered—as is sometimes the case of pickup fire crews under similar situations some of them would undoubtedly never have come out alive. These boys were, of course, almost scared to death; but they had been trained to follow orders, and it certainly paid off.

Today the scars of this fire can be seen by Park visitors, but the flames and the deafening roar are only a memory to those of us who think back on this fire as the one we lost to the high winds on September 1, 1936. 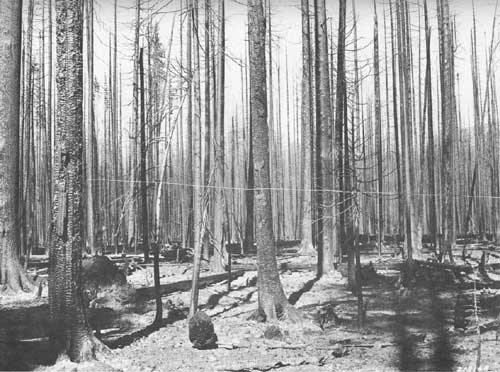