The Roosevelt Memorial Obelisk was built at Marias Pass on the Continental Divide in 1931. Congress appropriated $25,000, for the monument; Representative Scott Leavitt introduced the bill.

William H. "Slippery Bill" Morrison, claimed "squatter's rights" to the land at Marias Pass. Through diplomatic negotiations by the Columbia Falls Chamber of Commerce and others (including Supervisor Hornby of the Flathead National Forest), Morrison agreed to donate his rights to this land for building a monument to Theodore Roosevelt. Morrison stipulated that no concessions, "hamburger stands" as he referred to them, would be built on any of this property during his lifetime.

He also agreed to relinquish his right to the rest of his land at the time of his death. He died in March 1932 and is buried in the Conrad Memorial Cemetery. This land now belongs to the Federal Government.

The memorial was first planned as a granite arch over the highway. In August 1930, a cornerstone for this arch was laid on a concrete slab on the southeast side of the highway. There were speeches and band music from an improvised platform. The cornerstone was of rough-cut granite, 2-1/2 by 2-1/2 feet square and weighed about 1,500 pounds. It was lifted into place on the concrete slab with a hand-powered winch. Eleanor Roosevelt, a distant cousin of Theodore Roosevelt participated in the program. She is best remembered as the wife of President Franklin D. Roosevelt. After the cornerstone was in place, Mrs. Roosevelt placed a small, sealed copper box in a hole in the cornerstone and covered it over with cement. The copper box contained a copy of Congressman Leavitt's bill and some other documents. In 1931, it was decided to build an obelisk rather than the arch over the roadway. Bids were invited, and Kirkpatrick Brothers (Ross, Warren, and Hugh) of Kalispell was awarded the contract.

The obelisk is 60 feet high and extends 19 feet into the ground. It has a tapering cement core covered on all sides with 7-inch slabs of Montana granite quarried near Helena.

The cement core has a 5/8-inch copper cable, running from the seven short platinum points at the apex through its center to the bottom of the structure for lightning protection.

When the hole for the shaft was excavated, before any cement was poured, the cornerstone containing the copper container was placed in the bottom of the hole and the copper cable wrapped around it. The obelisk was completed in the summer of 1931.

The first travel over Marias Pass on U.S. Highway No. 2 was in July 1930. The last barrier was a large rock cut about a mile west of the monument. Traffic was first allowed over the Divide on July 4, 1930. There had been a road to the Summit from the east for some time. The Roosevelt Memorial was dedicated in October 1931. Participants on the program included Representative Scott Leavitt; Governor Erickson of Montana; Regional Forester Evan W. Kelley; Fred Thieme, regional engineer, who was in charge of construction of the obelisk; Kenneth Wolf, Forest Supervisor; and Fred J. Neitzling, District Ranger. The Forest Service fed a crowd of about 500 people from a fire-camp-type kitchen. Jack Clack, an early-day Forest officer, now living in Phoenix, Arizona, was chief cook.

In 1950, the Montana Highway Department, using special engineering instruments, determined the obelisk had a slight list, but due to its construction (19 feet in the ground), it is doubtful that it will ever lean enough to be detected without instruments.

In the summer of 1932, the Forest Service placed a large boulder on a concrete slab just south of the obelisk as a memorial to William H. Morrison. The boulder was trucked from near Lubec Lake. This work was done by a bridge crew, under the supervision of Harold Townsend, an engineer from the regional headquarters in Missoula.

Joe Tucker mounted a memorial bronze tablet on the boulder. The bronze tablet was donated by the Anaconda Copper Mining Company. The obelisk today is in need of maintenance. As there was no provision in the original Congressional bill for maintenance funds, it will take an act of Congress before any money can be spent on repairs. 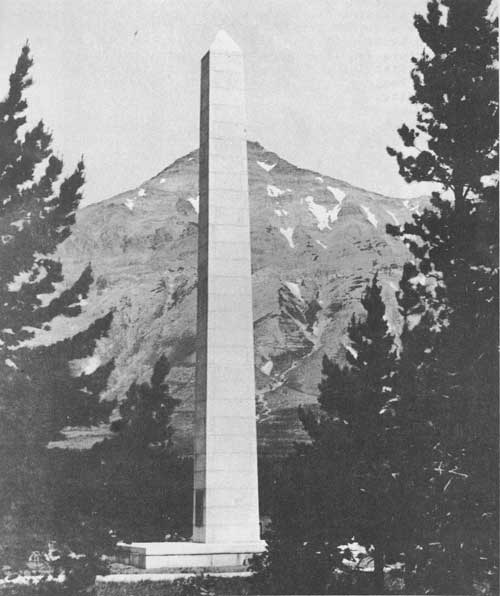