Nonrenewable resources have never been found in any great quantities in the Flathead National Forest.

Placer gold has been found in many of the streams, but never in amounts sufficient to attract more than a few of the more ardent prospectors. Copper was found in several places around Java and in the Star Meadows area of Tally Lake. A few tunnels were dug into the mountains, but the veins of copper were too small to make the operation economical. There was quite a silver and lead boom on Logan Creek in the South Fork, but there was not sufficient ore. A vein of low-grade coal, near Logan Creek, was worked several different times. This coal vein is now covered by the Hungry Horse Reservoir. (The coal mining activities in the North Fork are covered in the Mike Berne story.)

There have been prospecting stories and stories of strikes and lost mines floating around this area for years; but, aside from a few small veins of galena, copper, and gold colors in the streams, nothing of any significant value was ever found. No claims are being worked today in the Forest.

A large vein of barite, on Black Bear Creek of the South Fork, has definite commercial value. This exposed vein is 16 feet wide and is exposed for several hundred feet. It is of high grade, but is 27 miles from the nearest road; and the price of refined barite is less than $20 per ton, f.o.b. The demand at present is not sufficient to encourage the development of this deposit. The underground quantity has never been determined. This barite claim was filed late in the 1950's by Levi Gaustad of Kalispell. The claim was never patented, and no commercial ore was brought out.

There has been considerable oil drilling activity in the upper North Fork for over 60 years. Millions of dollars have been spent by large companies, but no producing oil wells have ever been developed. This activity has been confined mostly to north of the Canadian line and in the area now within Glacier National Park. The moving force behind much of this activity is the fact that oil is actually seeping out of the ground in many places. The first well was drilled near the head of Kintla Lake in Glacier Park in 1900 and 1901. There was seepage present, but no oil was ever produced.

One of the largest early oil booms was in Swift Current Creek near Many Glaciers, where seepage was in evidence in several places. About 12 wells were drilled in this area prior to the establishment of Glacier Park in 1910. One company in this venture was capitalized at one and one-half million dollars. This oil boom, oddly enough, occurred at the same time as a mining boom in the same area. Some of the mine tunnels had oil seeping out on the floor. However, no oil or minerals were ever found in commercial quantities. A small amount of natural gas was found, but not in sufficient quantities to be of great value. One well in the Swift Current valley did produce a few barrels of crude oil. However, the operators were later accused of bringing in the oil from other fields to the east and dumping it into the well in order to "grease" the stockholder. These wells were all less than 2,000 feet deep.

Si Ripley, a qualified geologist who was instrumental in the development of the oilfields around Cut Bank, told me that he had studied this area. He believed that this surface seepage was coming through faults in the formation from those fields east of the mountains and that there were no oil pools in the area. Ripley died 25 years ago. No oil has been produced in this area to date.

During the middle 1950's, large oil companies secured gas and oil leases on the North, South, and Middle Forks of the Flathead River in the Forest and on private land. The leases covered about 600,000 acres of Forest Service land. These companies, using modern seismographic equipment, have done much exploration work. No wells have been drilled to date. Most of these 5-year leases have expired. However, some seismographical work is still in progress. A few of the leases have been renewed.

Most of this information was gathered over the years by personal contact. Some facts are from Donald Robinson's Through the Years in Glacier National Park. 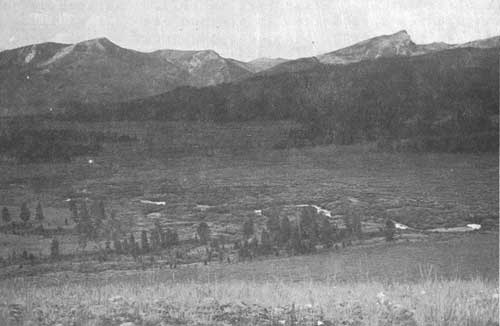 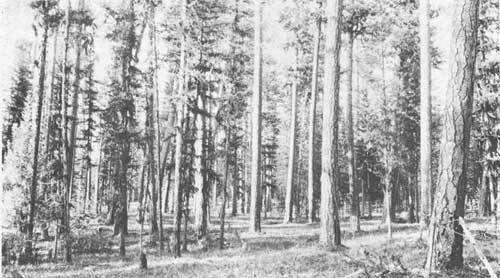 Ponderosa pine and larch timber in the Swan Lake Valley.