Hungry Horse Dam was built by the Bureau of Reclamation in five years, 1948 to 1953.

Hungry Horse Dam is 2,100 feet long and 564 feet high, and contains approximately 250 million cubic yards of concrete. It has four generators with a combined capacity of over 285 thousand K.V.A. It cost approximately $100 million to build. This money is rapidly being returned to the U. S. Treasury from the sale of electric power. Waters of the South Fork are now regulated to control the flow of the Flathead River, thus preventing floods in the valley and contributing to flood control all the way to the Pacific Ocean. Flood damage in the Flathead Valley alone has exceeded a million dollars in a single year.

The structure was built by a combine known as General Shea Morrison. Clearing of debris from the flowage area was a $10 million project in itself. Timber covered the area except where it had been destroyed by forest fires. Ninety million board feet of timber was removed, mostly in the form of saw-logs and poles. A few mills were set up to saw railroad ties. After commercial timber was removed, the debris was piled and burned. J. J. Reese had the first contract; Wilson and Crow and John Trisdale were the other contractors. Trees and snags, left after the logging, were pulled down by dragging a 1-1/2-inch cable, about 200 yards long, between two bulldozers. At first, the cable slipped up the trees, thus passing over the smaller trees. A heavy weight was fastened in the center of the cable to hold it down. But this caused the cable to catch all the stumps left from logging. John Trisdale, one of the clearing contractors, designed a hugh steel ball, eight feet in diameter, made of one inch boiler plate, weighing about 8,000 pounds. Cables were fastened to a shaft running through the center of the steel ball. This proved a great success. By putting this ball in the center of the cable between the two bulldozers, it held the cable four feet above the ground, thus clearing the stumps. Five of these 8-foot steel balls were used on this job. One of the balls is now on display in the roadside park in the town of Hungry Horse.

John Trisdale also experimented on brush piling by hitching two bulldozers together, side by side. Removing the inside tracks the machine was propelled by the two extra-long, extra-wide outside tracks. It was operated by just one man; controls were fastened together into a single unit. The brush blade on the front of this machine was 22 feet wide. It could push a tremendous load and pile lots of brush; however, this arrangement was not a success on steep slopes. Steep slopes and banks were cleared by running the bulldozers straight up and down the slopes, controlled by a large cable and winch mounted on the back of another tractor. They were run up and down these slopes like a "Yo-Yo", pushing all debris to the bottom. When the brush was all piled, it was burned. Larch butts and other unburned debris left after burning was buried. Stumps were left.

During the clearing on the flat near the mouth of Sullivan Creek, Trisdale and I were going over the area one day to review burning plans when we noticed a golden eagle on her nest atop a large larch snag that had the top broken off about 70 feet above the ground. Trisdale told his foremen to clear all around the snag, but to let the snag stand. All of the brush was piled and burned, but the lone snag—with its nest of eagles—remained until the fall. When the young eagles had left the nest, Trisdale sent a crew back to remove the larch snag. To John Trisdale, this nest of eagles was of sufficient importance to alter the plans of a multi-million dollar clearing operation.

While the reservoir capacity is greater than the annual runoff of the river, drawdown is controlled so that the reservoir is filled by the time high water is over, usually around July 1st. The reservoir then remains full and the shores resemble a natural lake during the summer months. In late fall, when downstream power demands increase, the generators are stepped up and the lake begins to fall.

During the summer months, fishing is good and there is a lot of area for boating. The Flathead Forest has four campgrounds and a site designated exclusively for summer homes on the reservoir. This 34-mile-long lake is also used to boom logs from the upper end to a point at the lower end where they are taken out and hauled to the mills.

After Hungry Horse Dam was finished and the construction force moved, the Flathead National Forest secured many of the Department of the Interior buildings for administration and housing. Included in this transfer were 13 dwellings, a dormitory, a conference hall, a cement-testing laboratory (now used for a Forest Service warehouse), and a large administration building. This large building is now used as the headquarters and warehouse for the Coram and Hungry Horse Ranger Districts. During the winter, the Spotted Bear and Big Prairie Districts also make their headquarters in this building. 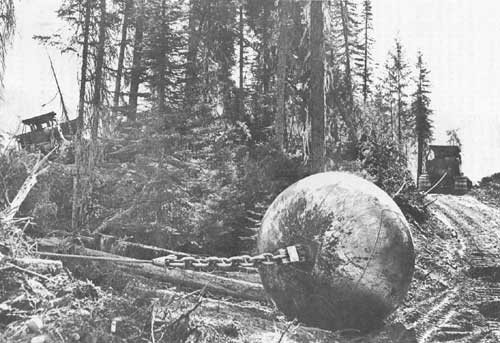