History of Use of Aircraft

Air travel for administration and fire control is commonplace in the Flathead National Forest. Use of aircraft for scouting fires in the Flathead dates back to the large forest fires of 1929.

Nick Mamer piloted Regional Fire Chief Howard Flint over the Sullivan Creek fire on the South Fork in 1929. When Howard saw that the Spotted Bear Ranger Station was in the path of the fire, he used a Forest Service form 877 to write a message and drop it to Charlie Hash, Flathead fire control staff officer: "Save Spotted Bear Ranger Station at any cost." Hash pulled 600 firefighters into the area, set up 20 Pacific Marine pumps; and the Ranger Station was saved. This forest fire burned for 101 days.

The first fire camp was dropped in the Flathead National Forest at Bunker Creek in 1939. The first smokejumpers (13) were dropped in Dean Creek in 1941.

Flathead National Forest's first patrol plane for aerial observation was stationed at Spotted Bear Ranger Station in 1946. First use of a helicopter for fire control and administration was at Spotted Bear in 1957. Chemical fire retardent (borate) was first used to bomb a Flathead Forest fire in 1958. The largest number of smokejumpers dropped on a fire in this Forest was the 75 during the Kah Mountain fire in 1947.

There has been only one aircraft fatality involving a Forest Service employee. Gene Tuininga was killed September 11, 1955, when a fire patrol plane crashed in the Mission Mountains Primitive Area. 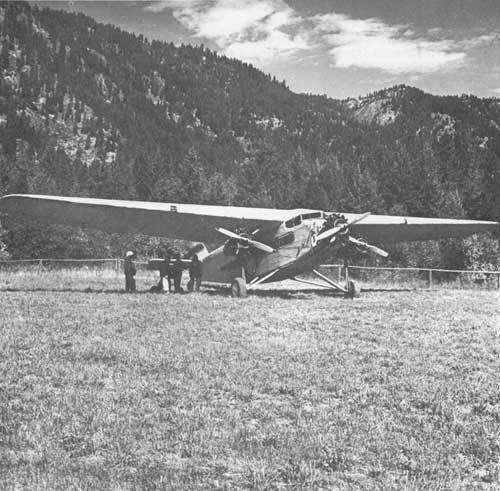 Tri-motored Ford. These planes, built in the late 1920's, have been the work horses of the air for the Forest Service for more than 30 years.