It seems that courage, daring, faith, and self-sacrifice have always been a part of the ecology of Flathead National Forest employees. The early Forest Service people were the typical western pioneer type: rugged individuals who loved the great out-of-doors and were willing to sacrifice comfort and endure hardships to accomplish their tasks.

A permanent position required experience in wilderness living, the ability to use your hands and handle horses, rather than technical training. Technical problems of forestry were not a part of the assignment. However, technical problems were soon considered an important part of their work.

For the first few years, following President Grover Cleveland's proclamation of February 22, 1898, all appointments, periods of employments, salaries, and furlough dates were set by the Forester, Bureau of Forestry in Washington, D. C. All vouchers for salaries and miscellaneous expenses were processed in the office of Chief of Records, Bureau of Forestry, Washington, D. C. There were often considerable delays between the time the work was done and the man was paid. One typical letter written to Washington on June 22 of 1898 reads in part, "Will you please advise me whether or not the salary vouchers of Deputy Ranger B. B. Holland for the months of April and May have been received by your office? "

Examinations for Forest Rangers and examinations for Forest Supervisors were separate. It was possible, by passing the examination, to be appointed Supervisor without having worked for the Forest Service or having had technical training in forestry. At that time the wages for Forest guards was $60 per month; Rangers received $75 per month. Each supplied his own provisions, horses, camping equipment (including bedding), and horse feed. The following is an excerpt of a typical appointment letter: "Frank Opalka, May 23, 1906. You have been appointed to Forest Guard at $60 per month to take effect June 1. On June 1 you will report to Ranger Sullivan at the U.S. cabin near Coram with your outfit and supplies for 2 months. Tools and tents will be furnished by the Service.

"You will work under the direction of Ranger Sullivan on the South Fork of the Flathead. Unless otherwise ordered by this office, you will not leave the Reserve before July 31.

Trapping beaver in Danaher Basin. Trappers were the first white men to explore the Flathead country. Along with prospectors, they did much to open up the Northwest. 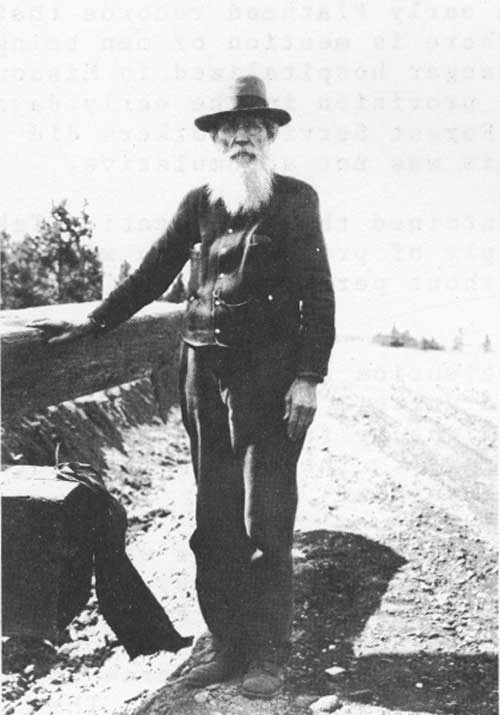 "Your salary will begin the day you enter the Reserve on this assignment . . . ."

Ranger appointments were just as informal except they were required to take an "oath of office."

When a Forest officer made a purchase for items from a previously approved list, official telephone calls, rent, etc., the purchaser paid for them from personal funds, received a receipt, and was reimbursed by the Washington Office.

Their work was custodial. They were to guard the Forest against fire and trespass, log out old routes and cut new trails. In these early times Forest Service employees were asked to report any insect infestations. They did not have the authority to enforce game laws until some time later. Grazing and timber cutting permits, mostly to the settlers for domestic stock and fuel, were issued as a matter of record to emphasize the changeover of these lands from vacant public domain to Forest Service control and administration. Most of these permits were issued free.

A few sales were made for commercial lumber. Sale rates were usually $1 per 1,000 board feet, 3 cents for 30-foot poles, and 15 cents a cord for fuel.

The health and safety of these men were undoubtedly considered but I could find nothing in the early Flathead records that referred to plans for safety. There is mention of men being injured. One case involved a Ranger hospitalized in Missoula for a bad ax cut. There was no provision in the early days for sick leave or retirement. Forest Service workers did get 15 days annual leave but this was not accumulative.

Initial instructions usually contained the statement: "Take your outfit and two months' supply of provisions in with you and do not leave the Reserve without permission from this office."

Rangers were responsible for prevention and suppression of forest fires in their designated units. Communications were dependent on messengers. Travel was by foot or horseback along a few main river bottom trails. The system of locating fires was not from fixed vantage points.

Rangers and guards each had a designated area for which they were responsible. They patrolled the area by traveling to mountaintops or other vantage points to look for fires. When a fire was discovered, they proceeded to put it out. If this was not possible, they went for help. A crew of 10 or 25 men was considered sufficient for most fires. The first permanent Flathead lookout tower was built on Spotted Bear Mountain in 1914. It was a two-story log structure, 14 feet square, built on the ground. In 1933 it was replaced by a 14 x 14 foot frame cabin atop a 20-foot tower.

The first Regional center was established in Missoula in 1900 and the first Forest Superintendent was J. B. Collins. Reports were sent to the Regional Office but the Washington Office did not release controls over finances or personnel for many years.

The Flathead National Forest was moved from Ovando to Kalispell in December 1905. It was located in one room of the Conrad National Bank Building.