1. National forests provide a living for almost a million people and recreation for 30 million or more each year. Under provisions that assure continuity of the forest stand, approximately 1-1/2 billion board-feet of timber are harvested from them annually. The national forests serve as a home for most of our western big-game animals. They furnish forage for 12 million head of domestic livestock including their young. They are the source of domestic water supply for 6 million city dwellers. 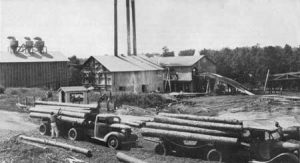 National forests provide a living for almost a million people without interfering with the pleasurable recreation of 30 million more.—Logs from Sam Houston National Forest, Tex. (F—372296)

2. National forest visitors can prevent public expense, forest waste, and occasional loss of life, by refraining from "flipping" lighted matches, cigarettes, cigar stubs, and pipe heels out of car windows or into the brush along forest roads, trails, and streams: by keeping campfires small and by drenching them and testing the embers with bare hands to be sure they are dead before they are left. On the average 172,000 forest fires are started in the United States each year. Of these 156,000 are man-caused. One-fourth of all fires in the national forests are started by careless smokers—chiefly tourists, campers, fishermen, hunters, and prospectors. One-tenth of all fires are started by careless campers who build their campfires too large or leave them without being positive that all sparks are out. 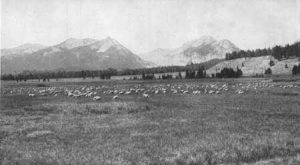 3. During the past 2 years, the Forest Service has spent more than 9,000 man-days per year searching for lost persons and rescuing persons either injured or killed. Most of those who become lost stray off the posted forest roads and trails or enter undeveloped areas without guides or proper maps. Injuries and deaths in many instances result from inexperience in coping with woods hazards and from lack of proper equipment. 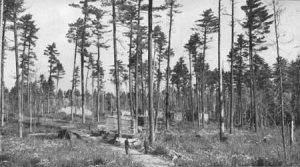 4. Agonizing "lost-in-the-woods" experiences, common injuries, and camper-caused fires can be avoided (a) by going to the forests properly equipped with local maps, shovel, ax, and collapsible canvas bucket, stout shoes, warm clothes, and plenty of food; (b) by determining in advance where the nearest forest ranger or forest guard is located so that in case of emergency he can be called upon for help without any loss of time; and (c) by staying on "signed" forest roads and trails unless you know how to take care of yourself in the isolated places.