ONE of the national forests, and oftentimes several, can be reached from practically any locality in the Nation within a few hours, or, at most, a day's driving time.

Picnicking, camping, fishing, hunting, hiking, and motoring are recreational activities common to all forests. Swimming is offered on most of them; canoeing and boating on the myriad forest lakes and streams—particularly in the Lake States area—are exhilarating pastimes. Pioneer days are relived on pack trips through the vast undeveloped wilderness areas of national forests in the Rockies, Cascades, and Sierras. And winter-sports enthusiasts find national-forest snow trails among the most exciting playgrounds in the United States.

Scenically and climatically, the national forests are as diverse as the 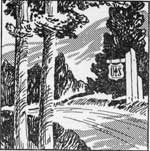 geography of the United States. Ranging from the mysterious cypress swamps and clumps of sand pines of the South to the alpine meadows and great fir and spruce forests of the Rockies and the Pacific Northwest and from the spreading hardwoods of the Central States and Appalachian Mountain region to the spectacular, towering redwoods of California, the national forests include timber types representative of every forested section of the country. Geological differences are equally broad, ranging from limestone sinks to glacier-clad peaks.

There are dense, humid forests and parklike semiarid forests. With the exception of a few units in the deep South and the Lake States, the national forest system is synonymous with hilly or mountainous terrain—characterized by cool or cold nights and warm, sunny days in summer; salubrious, colorful fall seasons; and cold, snowbound, or blustery winters. 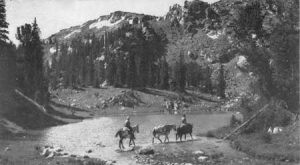 FreeEntry.—National forests are open and free of entry to all who come to enjoy them. This policy is followed in regard to recreation, although charges are made for practically all other forms of forest use. In fact, the regulated sale of forest products and the use of forest lands under permit bring to the U. S. Treasury receipts aggregating between 4 million and 6 million dollars per year, a fourth of which goes to the States and counties in which the national forests lie.

The only assessments levied in connection with public recreational use of the national forests are for certain special services. On some of the more heavily used recreational areas a demand exists for firewood ready-cut into stove or fireplace lengths, for bathhouses at which attendants are on duty, for clothes-checking services, etc. In response to the demand, these special services have been made available for a small charge. Use of such services is entirely optional with the individual, however, and in no way restricts free enjoyment of other facilities.

The sign of the national forest is the figure of a pine tree centered in a shield. This insignia usually will be sufficient to point the way, but visitors are expressly invited to stop at the nearest forest supervisor, ranger, or guard headquarters for first-hand information and local maps. A short chat with the ranger will often save confusion, and occasionally, serious trouble.

Because of particularly hazardous fire conditions or for special administrative reasons, the visitor may occasionally bump into "closed to public entry" barriers. Such closures are for the protection of the public as well as of the forest itself. In most cases they are of a temporary or emergency nature and in relatively out-of-the-way places where there is seldom any conflict with recreational pursuits.

Also to be noted is the fact that many tracts of land within national-forest boundaries are not in Federal ownership. Because these tracts serve private agricultural purposes, or because public appropriations have not been made for their purchase, or for other reasons, they have remained outside the jurisdiction of national-forest management. 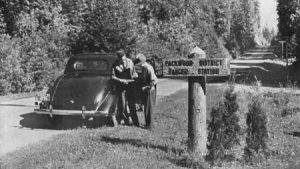 The ranger knows his forest—talk to him about your vacationplans.—Columbia National Forest, Wash. (F—385237)