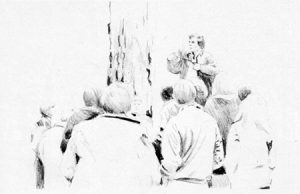 The President's Council on Recreation and Natural Beauty (created in 1965) presented its report, "From Sea to Shining Sea," which included numerous proposals and recommendations to enhance the quality of the environment. One recommendation was for grants-in-aid to help the States establish natural area systems.

The Forest Service began a new pilot program to provide outdoor nature experience for dwellers in urban areas, including school children and other groups and individuals, on National Forests close to heavily populated centers. It was called "Outdoor Patterns for People." A model was set up on the George Washington National Forest in northern Virginia, less than 100 miles from Washington, D.C.

A set of scaled gradual increases in the nominal livestock grazing fees on National Forests and National Grasslands, as well as on public lands managed by the Bureau of Land Management,extending over a 10-year period, was announced by the Secretaries of Agriculture and Interior. The ultimate aim was to have the fees charged to livestock owners reflect the actual value of the forage consumed.

Congress restricted, for 3 years, the export of logs from Federal forest lands in the West.

The Multiple Use Advisory Committee for the National Forests called for more emphasis on esthetics and landscape architecture in timber management, more useful disposal of waste after logging,removing logs by methods which avoid destruction of ground cover, and harvesting in small patches rather than in large blocks when clear-cutting is used. It also advised that roads built primarily for logging be closed or limited in use after logging is completed. 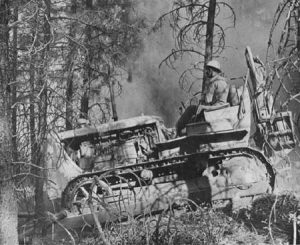 1969 During hearings conducted by the Senate and House Banking Committee on rapidly rising prices for lumber and plywood, testimony revealed that in the National Forests in the West, 10 billion board feet of timber were being lost every year to insects,disease, wind, fire, and old age. It was estimated that half of this amount might be salvaged if these areas could be made accessible for harvest.

U.S. Plywood-Champion Papers, Inc., announced appointment of seven leading conservationists and leaders in environmental control as advisors in the construction and operation of the new forest products manufacturing complex it planned to build in southeastern Alaska. The objective was to ensure that wildlife, and air and water quality, are adequately protected.

Late in 1969, Congress passed the National Environmental Policy Act (NEPA) (P.L. 91—190; 83 Stat. 852) to ensure that activities of man be kept in harmony with the natural environment. The act called upon the President to set up a Council on Environmental Quality, and directed Federal agencies to make advance reports on expected environmental adjustments of major actions they plan to take, including Environmental Impact Statements as appropriate. This latter requirement proved to have an unprecedented moderating effect on planning and implementing public land management decisions.

The first Pioneer Area in the National Forest System was created—31,500 acres in the Clear water and St. Joe National Forests in Idaho. Timber harvesting and motorized vehicles were excluded, but other recreational facilities were allowed. This was an intermediate classification between wilderness and developed recreation areas.

Forest tree planting by all agencies, public and private, during fiscal 1969 totaled 1,432,000 acres. Some 580 million trees were shipped from 86 State nurseries, produced under the Federal-State cooperative tree distribution program; 114.7 million from forest industries, and 96.7 million from 12 Federal nurseries on National Forest lands. 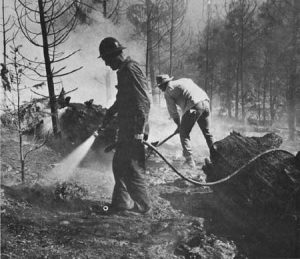 1970 Application of forestry to urban and suburban environments received special emphasis. The Forest Service gave its support for such a program, and announced that its Pinchot Institute at Milford, Pa., would henceforth concentrate on environmental forestry research.

In a public statement in mid-October, Forest Service Chief, Edward P. Cliff, announced that the agency was changing its direction to meet the sharply changed and insistent public demands of the 1970's. He noted that this need had been anticipated by his Agency in a summary of overall broad objectives in the booklet, "Framework for the Future," which was distributed throughout the Forest Service during 1969.

The final report of the Public Land Law Review Commission, "One Third of the Nation's Land," was released in mid-year after 5-1/2 years of work and $7 million in costs. It included more than 400 recommendations regarding the 755 million acres of federally owned land, also called public lands, about half of which are in Alaska.Although it advised keeping most of this land in Federal hands, the report urged disposal of much of it to livestock men, miners, and to State and local governments. It urged stricter limits to the power of the Federal Government to acquire land, and urged Congress to exercise more authority over management of public lands. The report favored more State and local control over public land use, and more participation indecisions of Federal Agencies by the people concerned.

The year turned out to be one of the worst for fires in recent years for the Forest Service, with more than 472,000 acres of National Forests burned in 18,000 fires. This was more than six times as much area as for the previous 5-year average.

The Youth Conservation Corps Act (P.L. 91—378;84 Stat. 794) (YCC) provided a 3-year pilot program for the Departments of Interior and Agriculture to employ youths (boys and girls) 15-18years old in a summer conservation work-learn program on the National Parks, Forests, Wildlife Refuges, and other public lands and waters.Provision was also made for grants to States for such work.

Apollo 9 space satellite photos and imagery were used to sample-survey 12 million acres of forests in the southeastern United States. 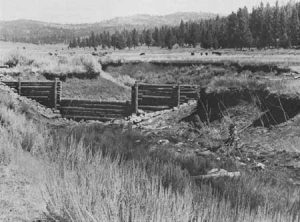 1971 Recognizing the sharp increase in public interest in the environment and the conservation of natural resources,the Forest Service inaugurated a policy to allow the public a greatervoice in the planning and management of National Forests, at the national, regional, and local levels.

Volunteers in the National Forests Act (P.L.92—300) allowed unpaid volunteers to work for the Forest Service. A similar program for the National Parks began a year earlier. 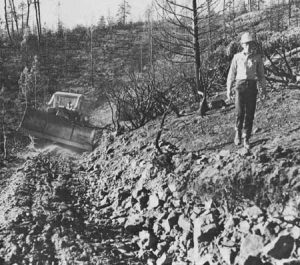 1972 Clear cutting was the dominant issue of the day. After receiving solicited analyses on the impacts of clear cutting from many sources, the Federal Council on Environmental Quality considered issuing recommendations or having President Nixon issue an Executive order to limit clear cutting and put other restraints on Federal forest management. It was later decided that such an order was not needed, but the controversy continued and surfaced in several bills introduced in Congress.

In the fall of 1972 the Forest Service selected 235 proposed study areas for wilderness designation. These covered 11 million acres in 14 States and Puerto Rico. They were placed in a reserve status, to be managed so as to protect potential wilderness values until final decisions are made. Public comment was invited at national and regional press conferences, and an environmental statement was filed with the Council on Environmental Quality. A final enlarged list of new wilderness study areas was issued by the Forest Service a year later.

The Forest Service reported a remarkable response by the public to reforestation assistance projects suggested and implemented by the Hunt-Wesson Co., a western food-packing concern in cooperation with the Forest Service. The firm offered to pay for the planting of forest trees where needed on National Forest lands; one tree for every label returned on a food product. More than 1.5 million labels were returned, and the Company turned over to the Forest Service money to plant an equal number of trees. Another such cooperative endeavor was carried out by the Datsun automobile firm which turned over to the Forest Service enough money to plant one tree for every person who took a test drive in their cars during the latter part of 1972. These were among several projects under the Forest Service's Cooperative Environmental Program (CO-EP). 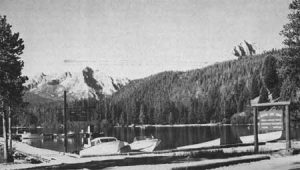 1973 The first session of the 93d Congress passed the Agriculture and Consumer Protection Act (P.L. 93—86; 87 Stat. 243), which included the forestry incentives. These were designed to encourage a higher level of reforestation, forest protection,development, and management by small, nonindustrial, private and non-Federal public forest land owners.

Faced with the threat of a U.S. law which would cut log exports, Japan agreed to reduce its imports of U.S. softwood logs by 10.9 percent during the fiscal year 1974. In 1972 log exports from Alaska, Oregon, and Washington totaled a record 2.8 billion board feet,2.52 billion board feet to Japan alone.

A new national fire danger rating system was put into widespread use in the summer of 1973, jointly, for the first time by Federal, State, and private forest fire protection agencies, using the same measurements to aim at fire danger levels, incorporating more exact data on forest fuels than was previously possible.

The President's Advisory Panel on Timber and the Environment reported, after nearly 3 years of study, "The demand for wood can be met, in harmony with environmental protection, if we give high priority to the timber-growing and cultural measures that will guarantee our future timber supply into the 21st century and beyond."

The Forest Service took two major actions on mining during 1973. It began on-the-ground implementation of its 5-year research, development, and application program called SEAM (Surface Environment and Mining), aimed at integrating modern planning,production, and reclamation of mining areas. The other major mineral action was the proposal of appropriate regulations for the 140 million acres of National Forest land, including much official Wilderness, which are subject to location and entry under the 1872 mining laws. The proposed regulations were published in December with requests for public comments, and, with revisions, were to be put into effect in September 1974.

1974 The Environmental Protection Agency granted the Forest Service emergency permission to use DDT on the tussock moth epidemic in Douglas-fir forests in Idaho, eastern Oregon,and Washington after along, searching review and four public hearings.The aerial spraying was conducted on the most severely damaged 430,000 acres, and a larva kill of 98 percent was attained.

The Forest Service's long-heralded "Environmental Program for the Future" (EPFF) was released for public review and comment.

Undoubtedly the most significant forestry legislation enacted in 1974 was The Forest and Range land Renewable Resources Planning Act (P.L. 93—378), also referred to as the Resources Planning Act (RPA). The draft EPFF document, mentioned above, and the public response to it were both used as a basis for development of the Renewable Resources Program. Intended to ensure adequate preparations and funding to meet immediate and future forest research needs, the act greatly stimulated Forest Service planning activity and brought considerable encouragement to forest industries and conservationists alike that it would result in consistently adequate funding support for balanced forest resource management in the National Forest System. Under the law the Forest Service must periodically submit to Congress both a Renewable Resources Assessment and a long range Renewable Resource Program. The first transmittal of both these documents is set for December 31, 1975. Drafts of both Assessment and Program Documents were expected to be available for public comment by August 1975.

The new Forestry Incentives Program for non-Federal lands received an appropriation of $25 million for fiscal year 1975 in the Agriculture—Environmental and Consumer Protection Appropriations Act (P.L. 93—563; 88 Stat. 1822).