Many of the present National Forests existed as Forest Reserves before this name was changed to National Forests in 1907. The first reserve, the Yellowstone Park Timberland Reserve, was set up March 30, 1891 by President Benjamin Harrison.

Over the years, the names, number, and acreage of National Forests have changed considerably as new ones were set up and existing ones were consolidated for economy and efficiency of administration, or transferred to other uses and agencies. Large areas became National Parks. In many cases two or more smaller forests which still retain their names are administered by one supervisor, for economy and efficiency. (This can be noted where forests have the same headquarters in the list below. For instance, in the South, where many forests are small, there are 33 forests but only 14 supervisors, 10 of which supervise all the National Forests in their States.) One very large forest, the Tongass in Alaska, has three area managers in lieu of a forest supervisor.

The research organization of the Forest Service includes the world-famous Forest Products Laboratory in Madison, Wis.; 8 Forest and Range Experiment Stations which serve various regions; and the Institute of Tropical Forestry. 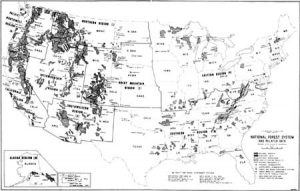 Research in wood utilization is done at the Forest Products Laboratory, Madison, Wis.

Research in tropical forestry is done at the Institute of Tropical Forestry, Rio Piedras, Puerto Rico.

Research in northern forestry is done at the Institute of Northern Forestry, Fairbanks, Alaska.

Research in forestry of islands of the Pacific Ocean is done at the Institute of Pacific Islands Forestry. Honolulu, Hawaii.