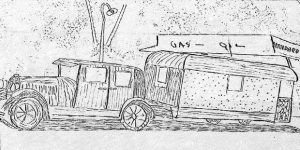 In April of 1935, U.S. Department of Agriculture plant pathologist E.P. Meinecke circulated a short paper he had written entitled, "The Trailer Menace." Although Meinecke's paper is dated April 1, the text comes not as an April Fool's joke, but rather as a stern warning that managers of the nation's forests and other public lands should brace for a new wave of motor tourism: enormous camping trailers.

Meinecke saw the accommodation of camper trailers, the forerunners of today's ubiquitous Airstreams and Winnebagos, as "a definite abandonment of the truly American ideal of the free enjoyment of forest and wilderness in simplicity and an invitation to bring the city into the woods." In Meinecke's view, these traveling "city slums" promised to overrun the public lands unless agencies acted preemptively to prohibit or restrict such motorized rigs. He saw such regulation, ultimately, as an "act of justice."

View the paper here in its entirety [PDF}