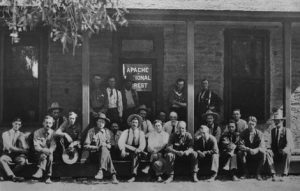 The Service Bulletin article "Seeking a Forest Service Song" concerns the search for an appropriate Forest Service song and has this to say: "The Ranger Song," to a tune from Rio Rita, has now become identified with the Forest Service in the minds of thousands throughout the country through its use for more than a year as the signature song for the radio drama, "Uncle Sam's Forest Rangers." It is a lively addition to our repertory. But since it is used with music from a popular musical comedy, we can not claim it exclusively as our own." (Forest Service, Service Bulletin, vol. 17, no. 8, April 10, 1933, p. 4-5)

When we rangers ride the trail / In sunshine, wind or snow or hail
We're always ready / We're true and steady.
There's a friendly laugh, a joke, / We're cheery until we see a smoke,
And then we'll fight, sir, / To get it right, sir.
We never leave a fire till no spark is to be seen;
Our job's to guard the timber, keep the forest green.

chorus:
We're all pals together, /Comrades, birds of a feather
Rootin' pals, tootin' pals, / Ridin' pals, fightin' pals.
In rain or sunshine.
Pals! Say there brother, / Pull for each other --
Always play the game, fight the flame
For we all belong to the Forest Rangers
Man to man.
(from Service Bulletin, vol. 16, no. 23, June 6, 1932)

Our mimeographed copy of the following song has a handwritten note that says, "I don't know why or when the name was changed to "The Lucky Ranger." Originally just "Ranger's Song."" (Sorry, we don't know who the "I" is!)

The Lucky Ranger
by P.S. Lovejoy
(tune: Johnnie and Frankie)

O once there was a ranger / Who always did his best
He wore the Service uniform / And a badge upon his vest
He had no interest / Save in his forest.

He had his breakfast early / Two hours before daylight
He hit the trail at sun-up / And kept it up till night
And half the night / He'd read and write.

O he was in demand / When trouble was in sight
For he could run a Whizzer / And he could also fight
Hell or high water / It was all right.

His mind was automatic / He never liked debate
He never hesitated / And never was too late
He could not make / A mistake.

He thought the world was skookum / But asked two things from life
That he should own a forest / And that he find a wife
For to marry / Was necessary.

One day a tourist's daughter / Got lost out in the brush
The 'phoned in to the Ranger / And he was there with a rush
They needn't worry / For he would hurry.

He tracked her down a canyon / And up a mountain side
And if he hadn't found her / She certainly would have died
But she was plucky / And that was lucky.

For when the ranger saw her / A great big grizzly bear
Had run her up on a pile of rocks / And he was a-keeping her there
And now the Ranger / Was in great danger.

But the Ranger ran right up / And pulled his forty-five
And the air turned blue with the smoke of it / But the bear was still alive
The fighting / Was exciting.

The Ranger's guns were empty / So he pulled his Bowie knife
For the bear was coming for him / And he had to save his life
And for a fight / That was all right.

But the Ranger he was losing / For he didn't have the weight
The girl saw things were desperate And she was most too late
But she was coming / And coming running.

The bear was bleeding badly / But the Ranger was all in
When the bear hit him an awful smash / And it looked just like a win
But in a clem / Cherche la femme.

The bear reached for the Ranger / Who had fainted with the shock
When the girl ran a hairpin down his ear / And beaned him with a rock
The with the knife / She took his life.

The Ranger's leg was broken / But they had to get outside
So the girl she carried him fifteen miles / And all the way she cried
For she was sad / And also glad.

She nursed the ranger well / And then one moonlight night
He said, "My dear, I love you / You certainly can fight
You saved my life / Please be my wife."

"But we will have to wait, dear / For a while at least I fear
For I have no Ranger Station / And it may take me a year
The Supervisor / Is a miser."

"No! I can't wait so long / And anyway don't you care
We will get married tomorrow / For Pa is a millionaire
Pick out your forest / And get the best."

Well he thought of the old Uinta / And the Routt and the Medicine Bow
The Blackfeet and the Coeur d'Alene / The Crook and the Durango
But they all had / Too blamed much snow.

He thought of the Uncompahgre / The Gila and the Kern
The Modoc and the Klamath / But he was afraid they'd burn
And also / The Ochoco.

He wanted to make certain / There should be no mistake
So he took a trip to the Kootenai / And then to the Fishlake
And the Lolo / And the Mono.

The Leadville was too high / The Kansas was too low
So he passed up all of District Two / And still was on the go
To look still more / Became a chore.

But he said, "I am a Ranger / And the forest is my home
I must find one that suits me / And until then I must roam
It will be fun / To own one."

He went to the Pacific / And climbed up Mount Ranier
He looked around all Puget Sound / And then he said "I fear
That each is rainier / Than Ranier."

The Datil was too dry / The Chelan was too wet
The Inyo was awful dry / The Chugach wetter yet
In melancholy / He slipped his trolley.

Year after year he wandered / Till he forgot his wife
To find a perfect forest / He gave up all his life
He never knew that / He could not do that.

Out in the scaler's cabins / Nights when the wind is high
The Scalers tell each other / "There's that Ranger goin' by
Poor cuss / Worse off than us."

Days when the fires are working / And there isn't any sky
And there is no grub or water / They here him goin' by
"Poor cuss / Worse off than us."

Noons when the crew finds water / And the cigaretts are made
They damn their job and the party chief / But they do not want to trade
"Poor cuss / Worse off than us."

Up at the Lookout Station / With his heliograph and phone
The Lookout talks to the Guards below / And they say "He's all alone
Poor cuss / He envies us."

When the Beartrap District Ranger / Meets up with the one below
They damn the Supervisor / But they let the other know
"Poor cuss / Worse off than us."

When the Utah Supervisor / Meets one from District Three
They damn the District Foresters / But in this they agree
"Poor cuss / Worse off than us."

The Swartzwald suits the German / The Zielwald suits the Swiss
The Brittish like the Punjab / And it all comes down to this
"Poor cuss / Worse off than us."

And some folks like forests level / And some prefer them rough
And some want a little and some want lots / And each is good enough
"My forest / Is always best."

Jack Sprat could eat no fat / Far fields are always green
The other fellow has a snap / The Boss is always mean
O hell / It's just as well.