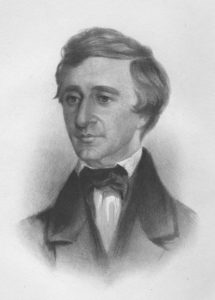 The bicentennial of the birth of Henry David Thoreau this month comes at an auspicious time. Given the political climate we live in, his essay "Civil Disobedience" resonates today more than it has in nearly a half-century. I break no new ground in saying that the man has much to say to us 155 years after his premature passing about our changing environment as well. As Gordon Whitney and William Davis noted thirty years ago in their article "Thoreau and the Forest History of Concord, Massachusetts": "Although Thoreau was noted primarily for his philosophy, he was also an acute observer of the natural scene, much more than his self-appointed title, ‘inspector of snowstorms and rainstorms,’ might suggest.” And while Thoreau traveled and observed nature in different parts of New England, "As a practical ecologist, surveyor, and husbandman, Thoreau was intensely interested in the history and management of Concord’s woodlots in the nineteenth century." Today, scientists—ecologists and forest researchers, among others—still use his observations as a baseline for their studies.

What makes him valued today as a forest historian can be traced in part to his experiences during the winter of 1856. His fascination with natural history increasing, Thoreau, according to Kurt Kehr, found himself trying to answer the question derived from the “observation common among New England farmers: when one cuts pine woods, the next generation is an oak woods, and vice versa.” In the essay "The Allegash and East Branch," written in 1857 but posthumously published in the book The Maine Woods (1864), the 150th anniversary of its publication of which was celebrated elsewhere on this blog, Thoreau restated the question, saying that

no one has yet described for me the difference between the wild forest which once occupied the oldest townships, and the tame one which I find there to-day. The civilized man not only clears the land permanently to a great extent, and cultivates open fields, but he tames and cultivates to a certain extent the forest itself. By his mere presence, almost, he changes the nature of the trees as no other creature does.

To answer the question, he spent the winter and spring of 1856 watching and recording how natural forces dispersed tree seeds near and far. By mid-May, he had drawn his conclusions, and had “extrapolated a lesson in the principles of forest succession,” Kehr concludes in "Walden Three: Ecological Changes in the Landscape of Henry David Thoreau." Pulling from several years' worth of his journals, Thoreau presented a lecture in September 1860, "The Succession of Forest Trees," a landmark work in forest history still worth reading today. Published in the New York Tribune and widely reprinted, it was the most widely read piece published in his lifetime.

Beginning the lecture with the farmers’ wisdom about oaks succeeding pines, continues Kehr, Thoreau then:

reasoned that while the wind is conveying the seeds of pines into hard woods, the squirrels and other animals are conveying the seeds of oaks and walnuts into the pine woods. He explained the successive alterations in tree populations (which he oversimplified a little here) in the following way: the oak seeds that are buried anew every year under the protection of the evergreen woods suffer less from the shading effect of the mature pines than do the pine seedlings. When the pine woods are cut down, the oak seedlings finally get a chance to develop into trees.

In short, he declared, all trees grow from seeds. They did not, as the dominant view held, spontaneously generate. Richard Higgins, in his recent book Thoreau and the Language of Trees, notes that “Thoreau also contributed to the understanding of the ages of trees and how to manage woodlands.” These were substantial contributions to forestry.

His ideas about forest succession echoed that of Charles Darwin and his work on evolution, published a year before Thoreau gave the lecture. Laura Dassow Walls, in her new biography Henry David Thoreau: A Life, says he was one of the first Americans to read On the Origin of Species on American soil. He was applying the principle of natural selection to the woods and fields of Concord for a new book—"Succession" was to be a chapter in it—though he would die before completing the work entitled “The Dispersion of Seeds.” His observations about humans as agents of environmental change (“When the pine woods are cut down…”) are found in that of George Perkins Marsh, who offered similar ones in his own influential book, published in 1864. Man and Nature: Or, Physical Geography as Modified by Human Action, praised by Lewis Mumford as “the fountainhead of the conservation movement” and the book that led Gifford Pinchot and others to take up forestry, owes a debt to Thoreau "Succession."

In George Perkins Marsh: Prophet of Conservation, biographer David Lowenthal makes clear Marsh read Thoreau. He praised The Maine Woods and drew from the younger man’s other works for his own, writing of Thoreau that “few men have personally noticed so many facts in natural history accessible to unscientific observation.” Both valued and praised wilderness as essential for humans, but also called for utilitarian conservation of natural resources. Like Thoreau, according to Lowenthal, Marsh “prescribed a balance of tilled land, meadow, and forest…. Indeed, the wildness Thoreau adored was no untouched terrain but a process of growth and decay, conquest and abandonment, in scenes made by both natural and human agency.” Thoreau’s conclusions, according to Higgins, were ignored by professional foresters and loggers. They “could not accept the work of a Transcendentalist, even a scientific one.” Thus, we find Thoreau in good intellectual company in 1864, but over time, his contributions to forest history became overshadowed by those of Marsh and others.

The next one hundred years saw appreciation of Thoreau’s forestry work recede, ignored by plant ecologists and foresters. The rise of the environmental movement and its embrace of Thoreau as naturalist-poet pushed his late-life scientific work out of the public’s mind, and with it his rightful place in forest history. The works cited here, and others coming out this year for the bicentennial, are balancing the scales of forest history. “In the last analysis,” observed Kehr, “Thoreau's contribution to forestry was his readiness to combine careful methodology with an appreciation for man's place in the ecology of the forest.” If his grasp of human and forest ecology are his contribution to forestry, then his writings about those topics are his contribution to forest history.