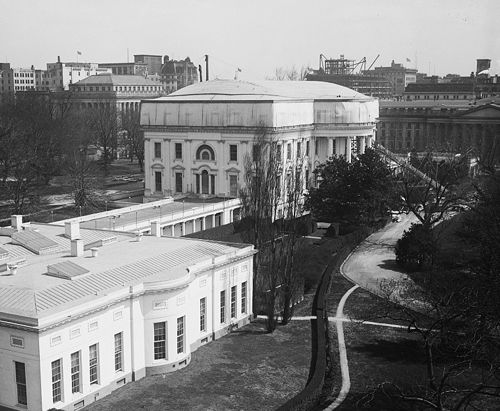 Ninety years ago this spring, a major repair project began on the White House in Washington, DC, that ultimately yielded wooden treasures. Work began in March of 1927 to remove large sections of the building’s roof in order to replace wood timbers with steel trusses and undertake a full remodeling of the third floor. This project was necessary due to some structural defects, along with the overloading of the building’s upper-most story. Originally designed as attic space, by 1927 the space had been providing significant storage space as well as servants’ quarters for too long. The roof structure being removed and replaced had been erected between 1815 and 1817 following the burning of the White House by British troops during the War of 1812.

Remodeling was completed by August 1927. During the construction, the majority of the wooden roof timbers removed were found to still be in good condition. Due to significant public interest in having souvenirs made from the White House wood, a public auction was held for the roof trusses as well as other miscellaneous pieces of removed lumber. In March 1928 more than 1,500 linear feet of Virginia longleaf pine lumber from the White House was auctioned off. The highest bid (at $500—a relative steal) came from the National Lumber Manufacturers’ Association (NLMA), and they ended up with the largest lot of timber. The NLMA and other organizations that bought the lumber planned to turn it into souvenirs to give away.

By December 1928 the NLMA had decided on crafting commemorative gavels from the wood. The Southern Lumberman reported: “Six hundred gavels are being made up from the timbers taken out during remodeling of the Executive Mansion last year after 112 years of service. They are being finished with clear varnish to show the natural grain of the wood and each is marked with a plate telling the source of the wood and accompanied by a printed leaflet giving the story of the gavel.” The NLMA planned to give gavels to “men prominent in the lumber industry, to prominent writers and public men, to the Vice-President of the United States and the Speaker of the House of Representatives and to the presiding officers of state legislatures, and to patriotic societies.” How many gavels were produced is not certain, but one of them is housed here in the FHS Archives (see photo below). The plaque on the gavel reads:

The NLMA also created other items from the wood. Candlesticks were made, including a set presented to President Herbert Hoover in May 1929. Blocks of wood cut from the roof timbers were affixed with plaques and given away. The NLMA also created one-of-a-kind items. One of the most interesting pieces was a humidor stand built as a replica of one originally used by President James Madison. The NLMA presented the piece to the Southern Pine Association at the latter’s June 1929 meeting in New Orleans. The wooden humidor was officially presented by Wilson Compton to H. C. Berckes, following Compton’s keynote address to the meeting. The Southern Lumberman described the moment:

As a climax to his able address, Dr. Compton lifted from the floor and placed it on the speaker’s table a curious little antique settee or as it really was, a humidor of obvious pine manufacture. It proved to be a replica of a bit of furniture that was in the White House at Washington under the Madison administration during the War of 1812, and that may have been burned when that building was destroyed by the British soldiers. The settee was reconstructed by President Madison’s orders from material taken from the roof timbers after the fire, and more recently the present replica was constructed from pine again from the White House roof—lumber that had come through more than a century of service as sound as when it went in.

H. C. Berckes, secretary-manager of the Southern Pine Association, receives the humidor from the NLMA.

According to Compton the gift was “an appropriate presentation to the Southern Pine Association, the invincible advocate of longleaf southern pine.”

The NLMA wasn’t alone in turning White House wood into wares. First Lady Lou Henry Hoover fashioned gifts from wood salvaged from the president’s home, though there is some debate over whether the wood she used came from the 1927 roof reconstruction or following repairs due to a 1929 fire in the Oval Office. Regardless, Mrs. Hoover had Christmas gifts made for family, friends, and White House staff in 1930. The First Lady sent some wood to Biltmore Industries in Asheville, North Carolina, where it was turned into ash trays, stamp boxes, paper knives, book ends, pen holders, and other small items. You can read more about the gifts made by Mrs. Hoover on Hoover Heads, the blog of the Herbert Hoover Library and Museum.

The enduring quality of the original wood, the uniqueness of their source, and their direct connection to American history, make these items increasingly valuable. You’ll see the various pieces pop up at auction periodically—and typically be sold for far more than the $500 the NLMA originally paid for its entire lot of wood.