On this day in history, leading conservationist Gifford Pinchot and six other foresters founded the Society of American Foresters in Washington, D.C.  In its 108-year history, the Society has grown to become the largest professional organization for foresters in the world. Currently representing more than 15,000 forestry professionals and students working in private industry, educational settings, and local, state and federal government, SAF strives to advance the science and professional management of forest resources, enhance member competency, and promote sound forest management and conservation practices for the health of forest ecosystems.

The Forest History Society is the fortunate steward of the records of the Society of American Foresters -- 458.5 linear feet, with more additions anticipated!  To describe SAF's beginnings, I defer to the original meeting minutes, which we hold in our collection, to provide an account:

Minutes of the First Meeting of the Society of American Foresters.

An informal meeting of foresters was called at the office of Mr. Pinchot on the morning of November 30th.  There were present Mr. [Gifford] Pinchot, Mr. [Overton] Price, Mr. [William] Hall, Mr. [Ralph] Hosmer, Mr. [Thomas] Sherrard, Mr. [E. T.] Allen, and Mr. [Henry] Graves.  It was stated that the object of the meeting was to discuss the feasibility of organizing a Society of American Foresters.  All those present were in favor of the organization of such a Society.

Mr. Pinchot was appointed temporary Chairman, and Mr. Graves temporary Secretary, in order that the Society might be formally organized.

A motion was made, seconded, and carried, that the society be known as the Society of American Foresters.  It was then moved and seconded that a committee of three be appointed by the Chair for the purpose of making recommendations as to the complete organization of this society. The Chair appointed Mr. Graves, Chairman, Mr. Price and Mr. Hosmer.  It was then decided that the Chair should call a meeting as soon as the report of the committee was ready.

Today also marks another significant event in forest history: the first appearance of a guest blogger on Peeling Back the Bark!  To celebrate the anniversary of SAF's founding, we have invited historian Char Miller, senior fellow of the Pinchot Institute for Conservation, to comment.  In his entry, Miller recalls fledgling efforts at professional forestry, debates within the field, and forestry's responsiveness to shifting challenges.

As Miller offers an overview of SAF, the rest of this post will highlight some interesting finds in our archival holdings.

The Society of American Foresters has boasted an impressive membership body; our 1907 member booklet in particular lists many influential men of the age. 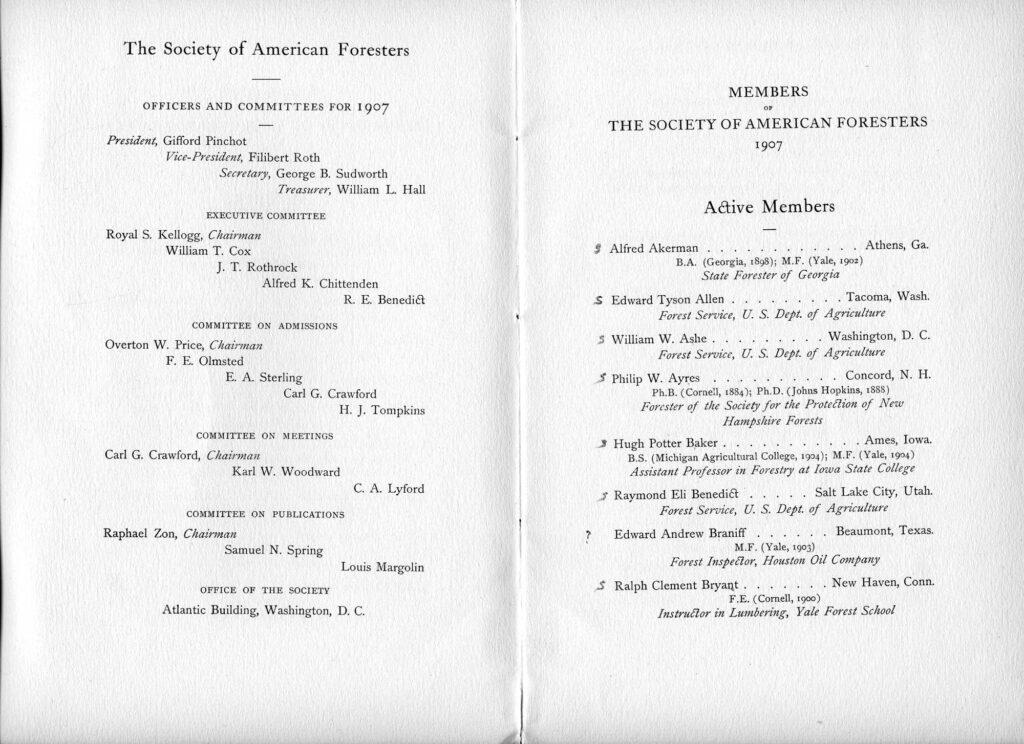 Flipping through the comprehensive membership rolls, more than a few names leap out, including:

One choice piece of correspondence holds the original signature of another man who would be United States president, Franklin Delano Roosevelt. 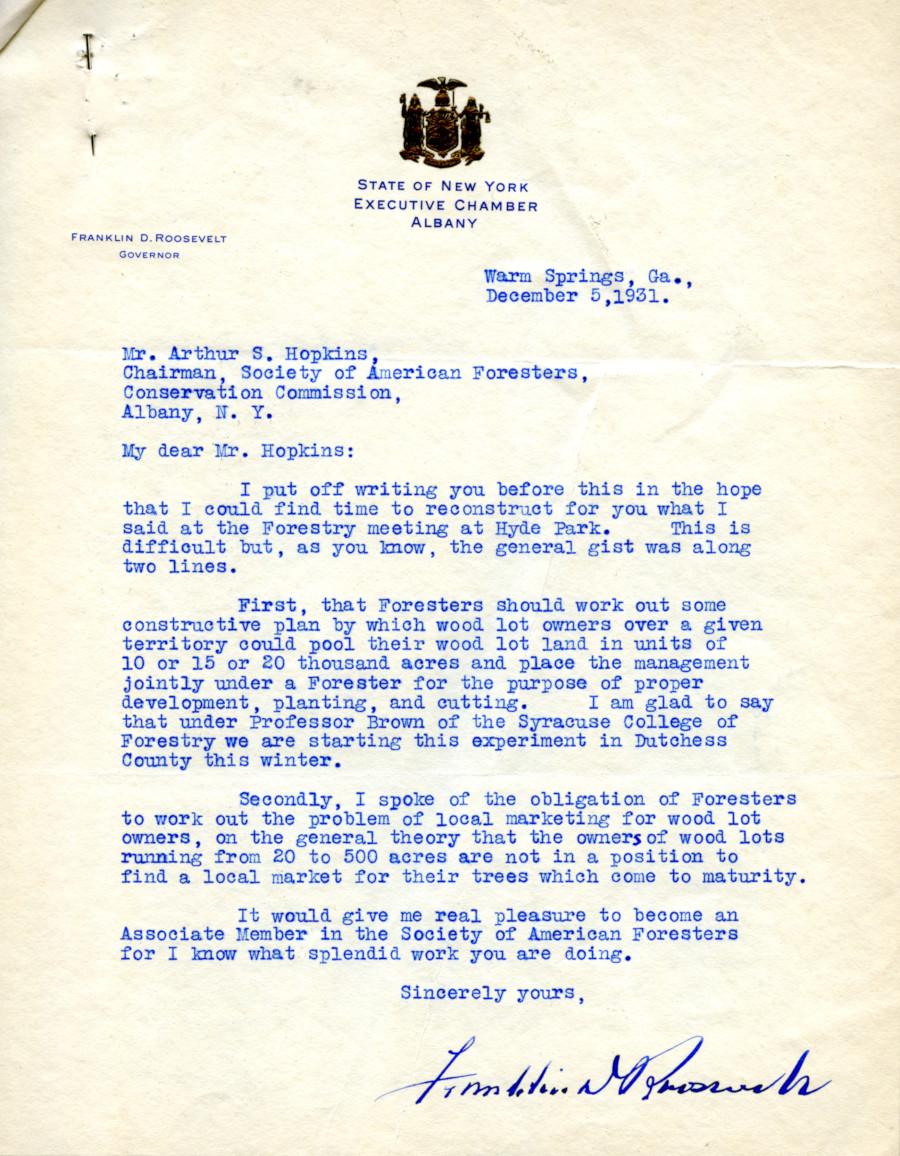 Writing on December 5, 1931, Roosevelt, then Governor of New York, reconstructed comments he apparently made at a Forestry meeting at Hyde Park. In the closing, Roosevelt accepted membership in the Society of American Foresters.

While Theodore is the Roosevelt more commonly associated with forestry and Gifford Pinchot, Franklin also had involvement with forest management and foresters.  For instance: 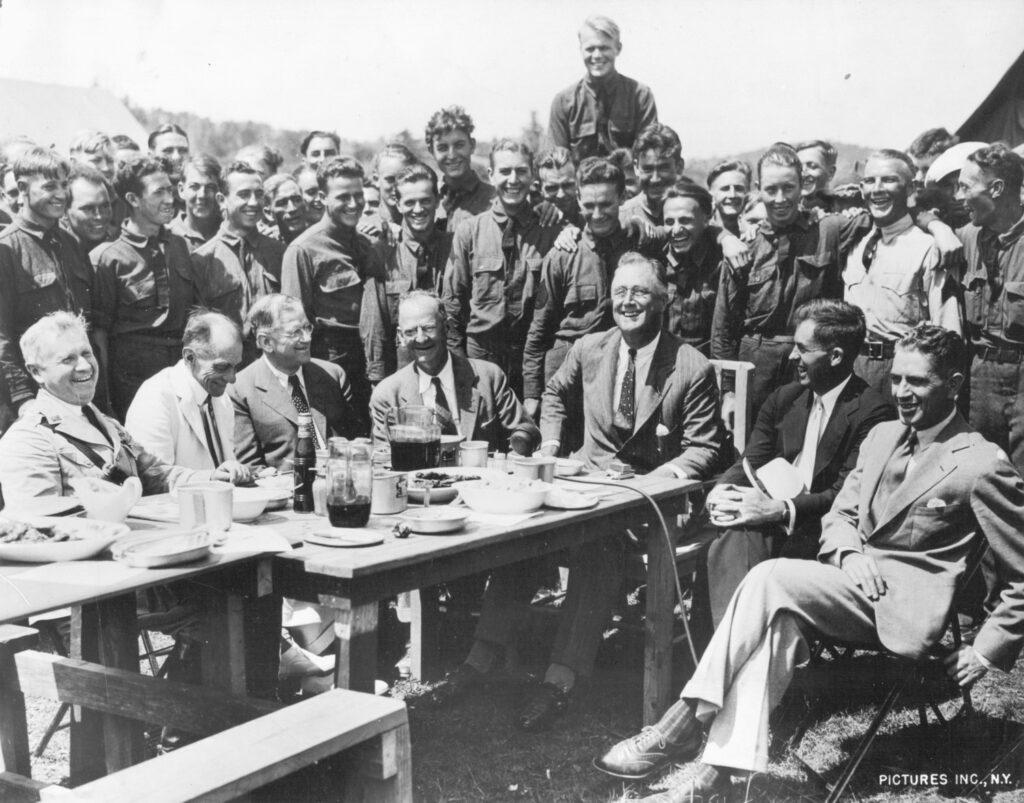 With correspondence, articles, unpublished surveys and studies, committee reports, and internal files touching on important natural resource and political questions throughout the twentieth century, the extensive records of the Society of American Foresters represent a veritable cornucopia of research materials.