A key instrument in fighting wildfires is the National Fire Danger Rating System — used to anticipate fires ahead of time by predicting the potential danger for fire in a specific geographic area.  The Forest History Society Library and Archives staff recently processed a collection that provides a history of the Forest Service’s creation of this national system, as well as highlights the intersection of science, engineering, and nature — revealing the multidisciplinary nature of forestry.

This new archival collection spans from the 1910s to the 1970s with a small amount of material from the 1980s through the 2000s.  The earlier material originated with John J. Keetch, fire control scientist at the Southeastern Forest Experiment Station in Asheville, North Carolina.  The more recent papers belong to Dale D. Wade, collection donor and fire researcher, and concern research in prescribed or controlled burning.

While processing the collection, I discovered that the main theme among the materials is the scientific method applied to the prediction of forest fire.  Anxious to save both man hours and money, Forest Service scientists pioneered a nationwide system for predetermining where and when forest fires would occur.  Foresters were then able to use daily predictions to prepare for fire control in advance.

The creation of a national fire danger rating system really began in the 1920s with the research of Harry T. Gisborne, the first U.S. Forest Service scientist to focus on estimating the probability of forest fire occurrence before a blaze ever began. 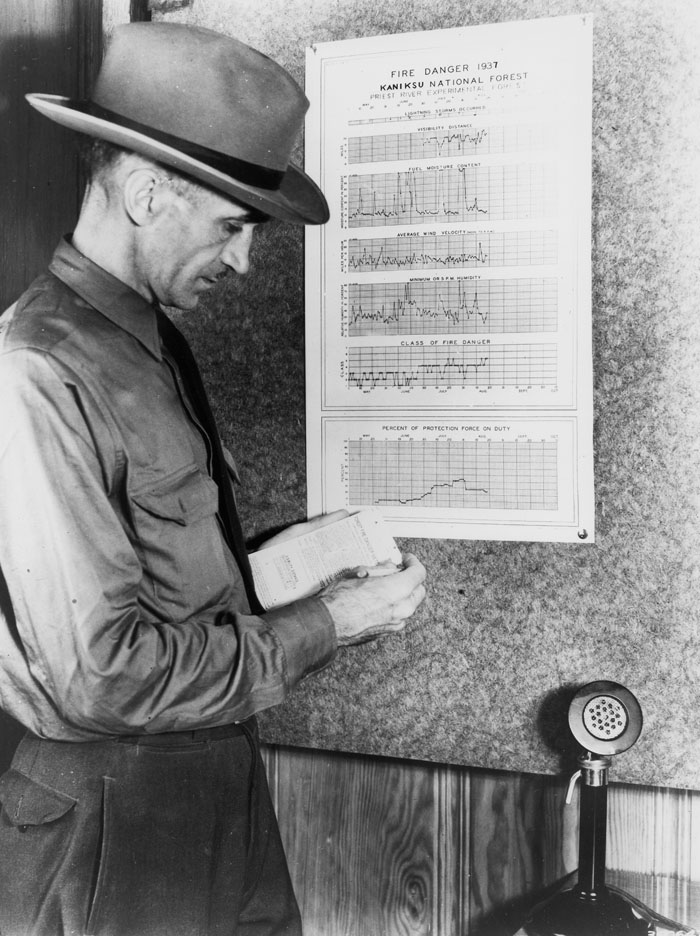 Gisborne engineered a simple slide rule–like device known as the Fire Danger Meter that foresters could carry with them in the field.  The meter made fire prediction easy and accessible, with consistent results.

The idea of the Fire Danger Meter spread like wildfire (groan) during the 1940s and 1950s.  Foresters and fire researchers across the U.S. created regional variations of Gisborne’s danger meter, adapted according to local weather, temperature, wind and water, soil chemistry, leaf litter, tree type—all the region-specific variables that factor into the likelihood of forest fire.  By 1954 at least eight distinct meter types were in use across the country.

At the recommendation of the Forest Service’s Washington Office, Division of Fire Research, a team of fire researchers and fire control officers from all regions of the United States began to develop a unified system in 1958, which was soon dubbed the National Fire Danger Rating System.  The research team worked toward a set of variables that could be used to predict fire danger regardless of geographic location.

John J. Keetch, whose papers make up the bulk of the National Fire Danger Rating System Collection, led this team of fire researchers and fire control officers in creating the basic structure of a four-phase fire-danger rating system.  The first phase of the rating system completed, the Spread Phase, provided indexes for predicting the relative forward spread of wildfires.  Keetch later traveled from region to region collecting feedback and criticism from those using the preliminary version of the unified rating system.

The materials in this collection provide the perspective of one fire control scientist on the process by which the unified rating system was conceived, tested, improved, and subsequently made operational in 1972.  The collection in its entirety also provides an excellent record of the evolution of fire prediction—a process at one time effectively done using rotating cardboard discs that is today done using a set of detailed computer programs.

To read a detailed inventory of the National Fire Danger Rating System collection, please visit our online finding aid — the first published with our new and improved design!