Known as “America’s Sweetheart” during the silent film era, Mary Pickford became one of the most powerful women in the history of Hollywood. By 1916, she was earning $10,000 a week plus half the profits of every film in which she appeared (and there were a lot!). And she was producing the movies she acted in and got to choose her director and had say over the film’s final cut. Then in 1919 with her soon-to-be husband Douglas Fairbanks, and Charlie Chaplin and D. W. Griffith, she became one of the founders of the film distribution company United Artists. By all accounts, she had the sharpest business mind of the group. 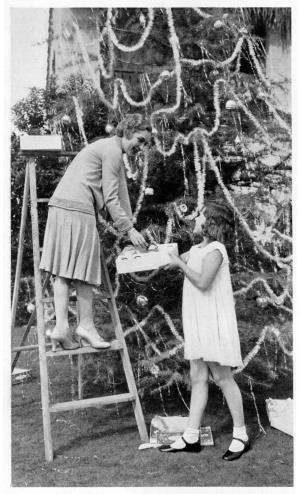 With the arrival of talking pictures in 1929, Mary’s acting days were numbered. Born in 1892, by 1932 she could no longer play the young waif or ingenue; besides, fickle audiences had moved on to the “next big thing.” She recognized this change and effectively retired from film work the next year. But her philanthropic work continued unabated. During the first world war, she had barnstormed the country selling war bonds. In 1921, she helped launch the Motion Picture Relief Fund to help actors down on their luck. She was a supporter of the American Reforestation Association in the 1920s, and on numerous occasions was photographed with Fairbanks and others planting trees. You can see some of those images on the Mary Pickford Foundation website.

Mary and Doug were the original “Hollywood royalty.” They hosted 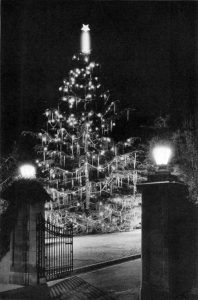 benefit parties at their Beverly Hills estate Pickfair, a practice that continued for many years, even after she had divorced Fairbanks and remarried in 1936. But when they moved there in 1920, they were pioneers. No other stars lived in the small city. But as the biggest stars of the day, their unprecedented move to Beverly Hills drew other stars like moths to a flame. Chaplin, who was close friends with Fairbanks, moved in next door and others followed them into what would become one of the poshest zip codes in the country. The happy couple devoted what little free time they had to civic duties around town. In the 1920s, Mary served as honorary chairman of the Christmas Trees Committee of the Chamber. In 1928, she and the city’s chamber of commerce worked together to promote decorating live trees for Christmas. Mary held the honor of turning on the lights of the big Christmas tree each year. She even returned from New York at the behest of former mayor Will Rogers to do so that year. For Christmas 1932, the plan was for everyone across the city who was going to decorate an outdoor tree with lights to turn them on at the same time on December 24. “This will, indeed, present a novel and interesting effect when the myriads of lighted trees make their dramatic appearance against the dark curtain of the night,” predicted Willoughby Welsh in the magazine American Forests. The trees on the hilltop residences such as Pickfair must have made a striking vision. You can read the article here.