A short time ago, my co-blogger Eben received a query from someone asking for "GP’s 10 commandments." He had not heard of this and passed the query along to me. "GP" is Gifford Pinchot, and as you probably know, he was the first chief of the U.S. Forest Service and helped develop many of the agency’s policies that still shape the agency today. As the founder of the Society of American Foresters, he also laid the foundation for the profession of forestry.

At first, “GP’s 10 commandments” didn’t ring a bell. Because this is fire season, I thought maybe the person had conflated Pinchot and firefighting and was confusing the commandments with the Ten Standard Fire Orders. After reviewing the note, we decided it wasn’t that. But given Pinchot’s strong religious convictions, his missionary zeal in leading the conservation crusade, and his willingness to martyr himself for the cause during the Ballinger controversy, such a list by that name didn’t seem out of the question. This is, after all, someone who began his memoir, Breaking New Ground, by calling his revered father, James, the “Father of Forestry in America,” claiming in quite a bit of hyperbole, “My Father’s foresight and tenacity were responsible, in the last analysis, for bringing Forestry to this continent.” In addition, he sprinkled fervent language throughout the memoir: “Being a convert to Forestry, I was eager to bear witness to the faith” being the best example.

Feeling puckish, I quickly responded to Eben with what I thought Gifford Pinchot's Ten Commandments might have been. I can just picture Pinchot coming down from on high with two tablets in his hands to speak to his green-clad followers and reading these aloud. 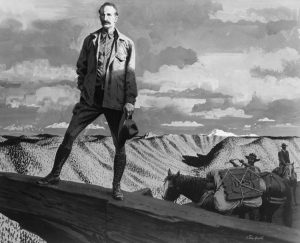 Gifford Pinchot pauses before descending with his commandments.

Pinchot with some of the faithful, a.k.a., a timber marking group on the Yellowstone Forest Reserve in 1906. Pinchot is in the center, in white. He's #7 in the lineup, but #1 in our hearts.

Well, it turns out that what the person was asking for was Pinchot's Principles—his advice to guide the behavior of foresters in public office. Put forth in a lecture or a series of lectures in the early 1900s at the Yale Forestry School, these were listed as "Maxims for Foresters" in a sidebar for an article in the February 1994 issue of the Journal of Forestry. The list can also be found under the title "Pinchot Principles" as an appendix in the Proceedings of the U.S. Forest Service Centennial Congress, published by the Forest History Society. Without further ado, here they are.

As it turns out, Pinchot was prescient once again. His principles seem as apropos today as they were a century ago.