“Recent experiments conducted in the woods of the Great Upper Lumber Company of Scandinavia have demonstrated the permanency of the Aerologger for use in the lumbering operations of this and other planets.”

So read the opening sentence of a 1913 article found in the publication Steam Machinery, in which author S. MacHenry described a double-plane airship capable of logging an entire forest in one flight. While meant as a humorous piece, in reality MacHenry wasn’t too far off the mark. Within the next fifty years, the use of balloons and helicopters in aerial yarding operations would become a reality.

Images of these aerial yarding techniques are featured in a new photo gallery added to our website today. The historical photos presented in the gallery document the use of balloons and helicopters in logging operations, primarily during the 1960s and 1970s.

The use of balloons, in particular, has an interesting history when it comes to log-moving technology. Balloon logging was first seen in the U.S. in 1964, when the Bohemia Lumber Company of Oregon began using a helium-filled balloon in logging operations. Company vice-president Faye Stewart was inspired in part by the use of logging balloons in Sweden, and brought the practice to the U.S. The perceived advantages of using balloons were both economic and environmental. Lifting the logs could help limit soil erosion, as logs would not be skidded along the ground. Logs also suffered less breakage moving through the air, and the use of balloons would theoretically lessen the need for additional forest road construction. 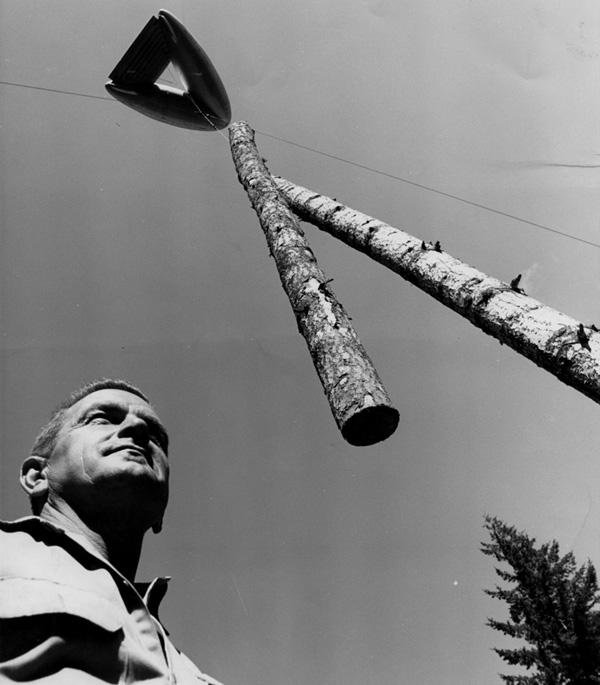 Stewart worked with the Goodyear Aerospace Corp. to develop a “V”-shaped balloon, and Bohemia soon formed a subsidiary company – Balloon Trans-Air Inc. – to manufacture and market the balloons. In the 1970s, Stewart would leave Bohemia and form Flying Scotsman Enterprises, his own balloon logging company. Other companies also began to market balloons, including Raven Industries in Sioux Falls, South Dakota, which manufactured traditional onion-shaped balloons for use in logging operations. The U.S. Forest Service also decided to get in on the action.

In 1971 the Forest Service announced the FALCON program (Forestry, Advanced Logging, and Conservation), a research and development program for aerial logging systems. The program’s stated purpose was to “improve the ability of resource managers to predict the economic and environmental consequences associated with the use of conventional and new logging methods such as balloons, helicopters, and cable systems, singly or in combination, with the aim of providing less damaging timber harvesting methods for environmentally sensitive areas.” With its special emphasis on helicopter and balloon logging, the USFS looked to perfect aerial logging systems that would minimize environmental impact, particularly in areas of difficult access.

Below is a clip from the FHS YouTube channel featuring film footage of some of the balloon logging operations from this era:

Of course, no discussion of aerial logging operations would be complete without mention of the infamous Heli-Stat — a controversial helicopter-blimp hybrid with a tragic history. The concept of an airship combining four helicopters with a large blimp was first patented by aviation pioneer Frank Piasecki in 1961. In many ways, Piasecki’s design could be viewed as the natural extension of MacHenry’s satirical 1913 aerologger. Except that Piasecki’s was actually real. After nearly twenty years of struggling to find funding for development of the craft, the Forest Service proved an enthusiastic supporter. 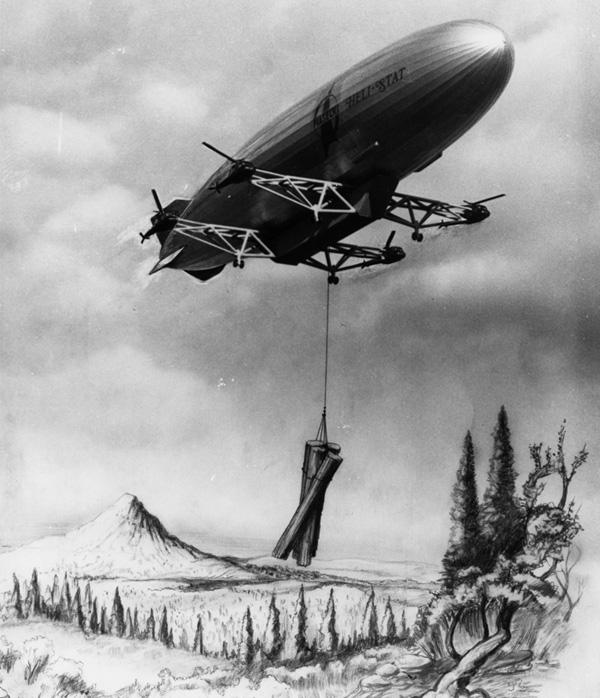 Artist rendering of the Piasecki Heli-Stat.

As fantastical as the design seemed on paper, the Forest Service saw the Heli-Stat as a way to log remote, roadless regions of the Pacific Northwest. Capable of lifting 25 tons of timber and carrying loads up to five miles, the Heli-Stat was viewed as the next evolutionary step after the logging helicopter. George Leonard, then the USFS timber management chief, stated that “it appears to offer an opportunity to remove logs from areas where it is economically or environmentally unwise to put roads.” The agency approached Oregon congressman Robert B. Duncan with the idea and in 1979 he managed to get three million dollars earmarked for development of the Heli-Stat.

Things didn’t go quite according to plan, though. The Forest Service stated that the agency would recoup any investment in timber sales from the lumber accessed with the new craft, but construction continued to go over budget. A GAO report in November 1982 estimated that the net cost of the Heli-Stat had already increased from 6.7 million to almost 32 million dollars. Critics asked if the agency was funding a balloon or a boondoggle. Journalists today would probably call it a “balloondoggle.”

Construction fell behind schedule and various technical problems plagued the development process. Navy, NASA, and Federal Aviation Administration officials all criticized the project during construction, stating that “poor quality workmanship practices have been used to build the interconnecting structure.” One Navy engineer, Louis Berman, criticized Piasecki’s use of “slide-rule engineering in an age when everyone else is using computers. You just don’t design aircraft that way.”

The criticisms proved to be well-founded. In a test run of the massive airship on July 1, 1986, the Heli-Stat failed in dramatic and spectacular fashion. On the same Lakehurst airfield where the Hindenburg crashed in 1937, the Heli-Stat rose thirty feet off the ground before the right rear helicopter broke loose and the entire craft collapsed into a burning heap. One of the five crew members was killed. It was a tragic ending to a controversial chapter in the development of log transportation technology.

And for additional topics, browse our previously posted subject galleries, or search the FHS Image Database.