Everyone knows Smokey Bear, Woodsy Owl, and maybe even Ranger Rick Raccoon, but there are many other forest and forestry-related fictional characters that long ago fell by the wayside. Peeling Back the Bark‘s series on “Forgotten Characters from Forest History” continues with Part 17, in which we examine Turp and Tine.

The annals of classic cartoon duos are packed with famous forest-dwelling characters who worked together such as Rocky and Bullwinkle, Chip ‘n’ Dale, Yogi and Boo Boo, and many others. Venture deep enough into the recesses of cartoon history and you’ll also find the classic forgotten forest history character duo of Turp and Tine.

Who were these simple painters who transformed an industry? Well the story of Turp and Tine has its beginnings over a century ago with the Hercules Powder Company.  A division of DuPont, Hercules became an independent company in 1912 after a federal court ordered DuPont broken up for violating the Sherman Anti-Trust Act. As an independent, Hercules continued its growth in the explosives market, supplying construction firms and the military with gunpowder, dynamite, and blasting powder. As of 1919, 99% of the company’s revenue came from sales of these various explosives.

Looking for diversification and new opportunities, the company expanded in 1920 into the world of naval stores (products derived from pine tree sap). Hercules bought the rights to pull pine stumps on large expanses of cut-over lands throughout the South, while also investing in research and technology to develop products from wood rosin. Soon the company was manufacturing steam-distilled wood turpentine from these stumps on a massive scale. This was contrary to the prevailing gum turpentine cut from living pine trees, which dominated the market at this time.

As a new kind of turpentine, Hercules needed to get the message out as to why their turpentine product was better (or at least as good) as the existing gum turpentine on the market. Enter Turp and Tine. The cartoon duo was created to help educate the public on the steam-distilling process as well as promote the Hercules brand. In the early to mid-1920s Turp and Tine promotional materials, advertisements, and even animated films began to appear nationwide. A Hercules advertising manager of the time described the creation and success of the Turp and Tine characters:

When we prepared this picture two years ago, we were faced with the problem of educating the users of turpentine to the fact that steam-distilled wood turpentine is a genuine spirits of turpentine and just as satisfactory for their work as the gum spirits of turpentine, which prior to a few years ago, was the only kind available. We had to get our story across not only to painters but also to distributors, jobbers and dealers through whom turpentine reaches the ultimate consumer. There was the usual prejudice against a product differing from that which had been the standard for many years, and our salesmen found it very difficult to tell the story with words only. In our picture we made use of animation to portray two painters “Turp” and “Tine” who appear in our  advertising. The introduction of humor into the picture helped to secure the interest of the spectators in the educational features, which included a complete description of the methods of producing both gum and wood turpentine and an animated mechanical diagram of the processes followed in our plants … We have ample evidence in our file that the motion picture was one of the most effective means we employed in accomplishing our objective. Our sales of turpentine have now increased to the point where our present manufacturing facilities are insufficient to supply the demand.*

The characters themselves were designed and drawn by artist Archibald B. Chapin (1875-1962). Chapin was a successful newspaper political cartoonist in the first half of the twentieth century, working for publications in Kansas City, St. Louis, and Philadelphia. He also penned comic strips such as Home Sweet Home, Uncle Dudley, and Superstitious Sue. A Hercules promotional publication circa 1930 stated: “Turp and Tine … sprang full-grown from the ink bottle of A.B. Chapin, who is one of the foremost cartoonists in this country. Since their appearance, Turp and Tine have made a host of friends, because they are likeable chaps; their antics make people laugh, while the lessons they teach are well worth knowing.”

With Turp and Tine leading the way the Hercules Company continued to grow throughout the 1920s and 1930s. At the time of America’s entrance into World War II, Hercules was the country’s largest producer of naval stores. Turp and Tine would ultimately fade into oblivion, though, as the naval stores industry declined and Hercules expanded into production of other chemicals as well as aerospace equipment and fuels. But like all forgotten forest history characters they continue to live on here at FHS.

*Klein, Julius “What Are Motion Pictures Doing for Industry?” The Annals of the American Academy of Political and Social Science 128 (November 1926): 79-83. 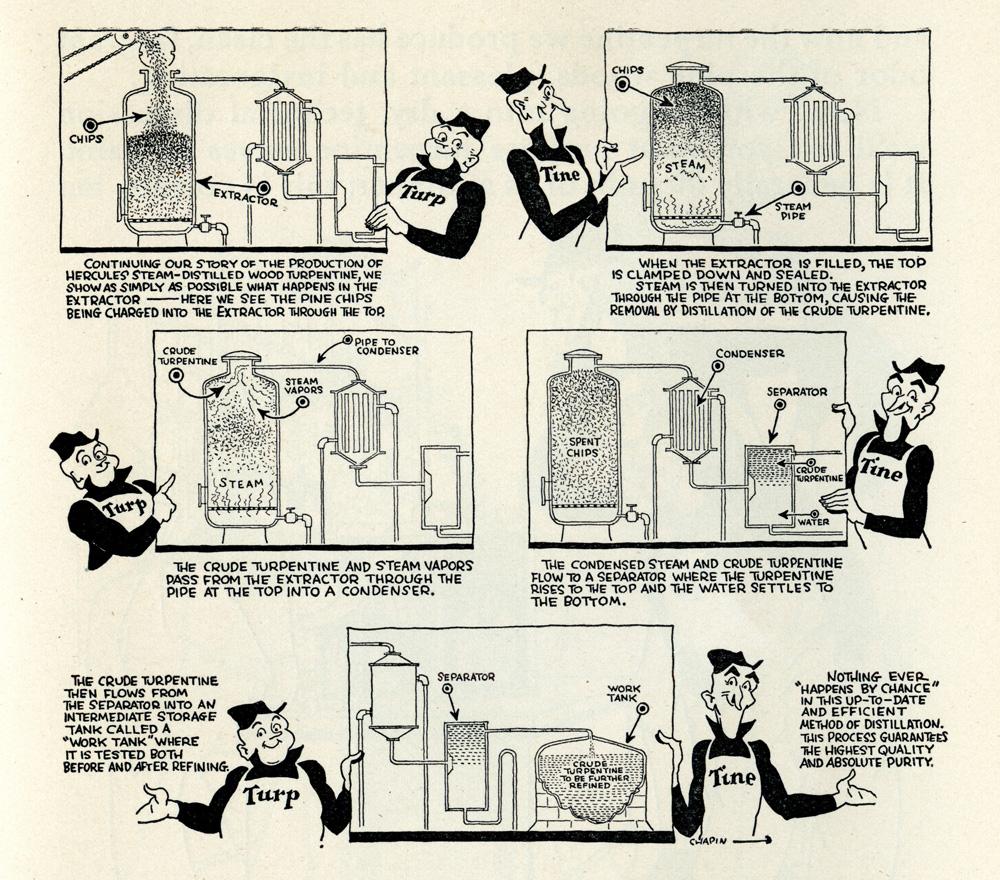 Turp and Tine show how Hercules turpentine is distilled from pine wood chips.