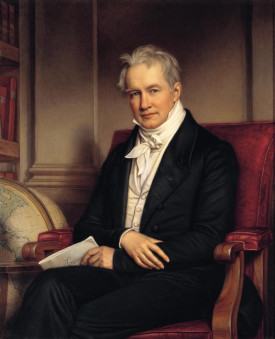 Join us for a FREE colloquium commemorating Alexander von Humboldt’s 250th birthday! The colloquium will bring together many of the world's leading Humboldt scholars for a two-day event on Nov. 1 & 2, 2019 at the Forest History Society. Friday's sessions start at 1 pm EDT, and Saturday's at 8:45 am EDT.

Seating is limited for this event. Click HERE to reserve your FREE space!

Born in Prussia, Humboldt’s restless life was packed with adventure and discovery on three continents, whether climbing the highest volcanoes in the world, paddling down the Orinoco River, or racing through anthrax-infested Siberia. Perceiving nature as an interconnected global force ("the web of life"), Humboldt discovered similarities between climate zones across the world and predicted human-induced climate change. He turned scientific observation into poetic narrative, writing books that were best-sellers in several languages that influenced politics, evolution, ecology, conservation, art, and literature. He inspired naturalists and poets such as Darwin, Wordsworth, and Goethe but also politicians such as Thomas Jefferson and Simón Bolívar. Famous, beloved, and respected in his lifetime, nations on three continents named universities, cities, and geographic features in his honor. He still remains well-known if not revered in Europe and Central and South America, but has largely been forgotten in the United States—this in spite of numerous cities, counties, mountains, and rivers bearing his name.

The colloquium will explore the many facets of Humboldt's work, influences, and legacy. Presenters include:

Can't attend in person? Watch the entire event live on our YouTube channel.