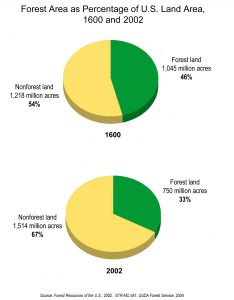 Many people tend to think of forested lands in the United States as National Parks, National Forests, or State Forests . Yet, a majority of forested lands are actually privately owned and provide numerous values to our lives. These private lands provide a variety of benefits to the public, such as: pure and plentiful water, clean air, wildlife habitat, recreation opportunities, and a renewable supply of wood and fiber. These benefits are often referred to as ecosystem services.

In the 1800s, growth in population and the need for agricultural land put increasing pressure on forests in the U.S. The nation's forestland area decreased dramatically. Then, in the 1900s with improvements in farm technology and productivity, forestland area started to stabilize. Today the nation's forestland is about the same size as it was in 1920 due to this stabilization even though population has continued to rise.

History of Land Ownership in the U.S.

Several events occurred in the early history of the U.S. that helped shape landownership patterns and property rights. Prior to the American Revolution, land was given to individuals and families by the British. This land might then be sold or deeded to other individuals. After winning the Revolutionary War, the newly formed United States government began to obtain lands throughout North America . Through the Northwest Ordinance (1787), the Louisiana Purchase (1803), the Florida Purchase (1819), and other such land purchases, the new government gained public lands faster than they could be sold or given away. Consequently the U.S. found itself holding more land then it knew what to do with. The government decided to allow these lands to be sold to private individuals in the hope that they would use them to generate wealth and therefore benefit the entire nation. The U.S government wanted to distribute as much of the public lands as possible as quickly as possible. This approach continued for more than a century.

During the Civil War the Homestead Act of 1862 and the Morrill Act of 1862 were passed. Both were created to put more land into the hands of private land owners. After the Civil War ended in 1865, more people began moving westward. 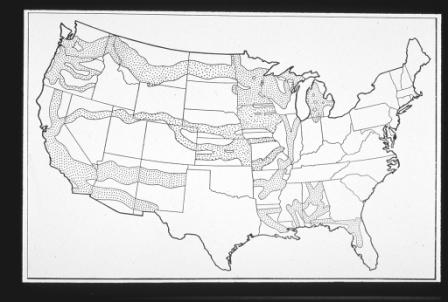 During the 1800s, about 75% of the continental United States was sold or granted to homesteaders, war veterans, local governments, and corporations. Between 1850 and 1870, 10% of land in the lower 48 states was set aside by Congress to help finance and operate the transcontinental railroad and telegraph systems which were considered essential for the growth of the young country. Often the land granted to railroads was sold by the railroad company in order to help pay the cost of railroad construction. The creation of the rail system enabled more rapid western settlement. In the end, four out of the five transcontinental railroads were built with help of these land grants offered by the federal government.

In the latter part of the nineteenth century, many people started to think about conserving natural resources. They began to realize that conserving resources was necessary to continue to provide the timber, range, and water needed to maintain growing populations and new communities. Policies of giving away land began to change and the U.S. started to create public forestlands. New forest management ideas and practices were developed. Private landowners began to focus on planting and nurturing the private forestlands they owned. In the early 1900s, various acts were passed to increase funding to manage forestlands and state offices (or departments) were set up to help guide forest management practices. By the early 1920's thirty-one states and Hawaii had set up forestry departments. In 1924, the Clarke-McNary Act was the first law passed that offered federal assistance to small forestland owners.

Over the years, growing populations and global economies have created increased demands for forest products (lumber, paper, siding, etc). This has increased pressure on private forestland owners to harvest their timber. For example, there are about 749 million acres of forest in the United States, almost 71% of that (or 530 million acres) is owned by private landowners or companies. These private lands provide the majority of the country's forest products and services. It is estimated that 89% of the timber harvested in the United States comes from private lands. This harvested timber is used to make thousands of products, from lumber to build houses, to tissues, napkins, and paper towels. About 30% of our nation's timber harvest comes from industrial lands owned by forest products companies and 59% of the timber harvest comes from non-industrial private forestlands owned by individuals, group associations, and Native American tribes. Only about 11% of the timber harvest in the U.S. comes from our national or state forestlands, though they make up almost 30% of the forestland base. 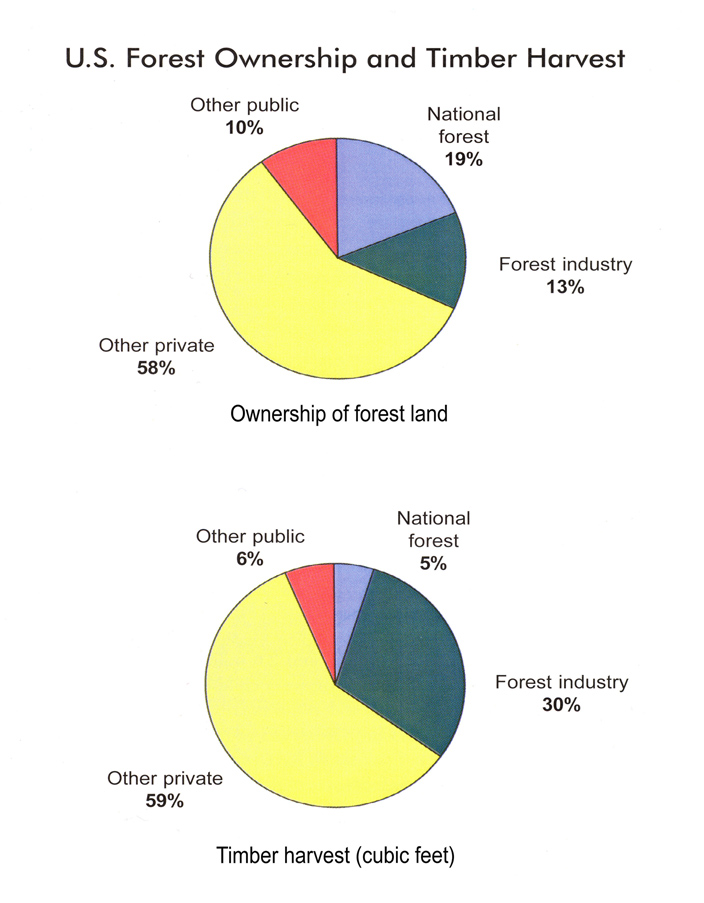 Figure 4: In this graph:

Private forestlands provide financial value to the U.S. economy. The trees on private forestlands can produce income to the owners who manage and care for that land. The selling of those trees also produces income to millions of people employed in the many steps involved in producing timber products. People are employed to cut, transport, manufacture, sell and distribute wood and wood products that we use everyday. Products like cardboard, furniture, paper, pencils, picture frames, desks, etc. often come from trees on private forestlands. 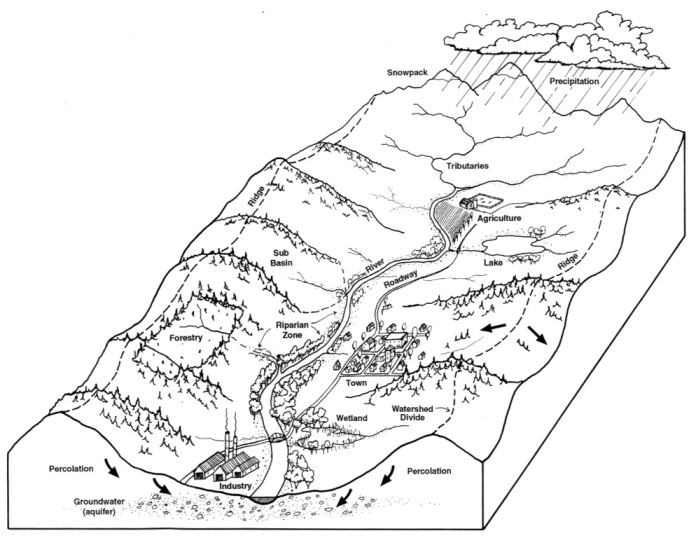 Figure 4: How watersheds work. Water travels over a landscape and eventually ends in rivers or streams. Healthy watersheds provide water for drinking, irrigation, and everyday human use. They also provide food, shelter, and water for wildlife. Image provided by: Lane Council of Governments, http://www.lcog.org/lgs/natres.html.

Private forestlands do more than just provide us with timber products. They are often close to cities and help protect the main watersheds in those areas. Forests are vital to watershed health. A watershed is an area of land from which water drains toward a common spot into a natural basin (such as a lake, stream, and ocean). Watersheds cover the entire Earth's surface, and no matter where you live, there is a watershed in your area. Two-thirds of the freshwater supply in the U.S. originates in forests. Growing cities put many private forestlands in danger of becoming developed areas.  A developed area is an area that has houses or commercial structures built on it. Private forestland owners may choose to divide and sell portions of their property to accomplish a personal goal or out of necessity. Usually such forestlands are developed, and new threats arise to the water quality. These forestlands that had helped protect watersheds, once developed, can cause new threats such as run-off from asphalt driveways and parking lots or heavily fertilized lawns. Run-off can lead to erosion which can add soil deposits in streams and rivers. Fertilizers used on lawns can seep into the ground water or run-off into streams; adding contaminates to drinking water sources. Contaminates are those things that make our water impure or unclean. One such contaminate often resulting from fertilizers are nitrates, which may cause health problems if consumed in large amounts or regularly.

Privately owned forests also provide habitat for wildlife. Nearly 80% of this nation's wildlife habitat is spread over privately owned land. About 393 million acres of this privately owned land is forest land. Therefore citizens who own private forests play an important role in managing and protecting our nation's wildlife. If these lands are divided and developed, wildlife that occupies these areas can lose food sources, access to clean drinking water, and the freedom to move safely from place to place.

Some private forest properties are owned by one person, others by several people or a family. Larger private forestlands may be owned by a company or group of investors. Many of them take great pride in owning and caring for their forestland, however, there is a wide diversity in the forests and in their owners. Some own 5 acres, some own 500 acres and still others own 25,000 acres or more. Some are interested in growing trees to make paper, some to make lumber or telephone poles and some to harvest Christmas trees. Others are more interested in using their property for hunting or other recreational activities, and still others are interested in using their land like a park or a natural area. The result of all of these variations has created the diverse mix of ever changing forest we see across the country today.

To manage their forests, private landowners commonly seek professional assistance from a variety of sources including lawyers, accountants, bankers, and of course, professional foresters. Much of the advice forestland owners receive comes from professional forestry consultants who conduct inventories, write management plans, and oversee harvesting and planting. But many landowners, especially those with smaller acreages, also use government foresters for advice on how to maintain healthy forestlands. Because private forest lands are so important, the state forestry or natural resources department in many states offer both technical (such as writing management plans) and financial assistance (such as tax deductions and cost-share programs) to private landowners to help them manage their lands.

Some of the funding for these efforts comes from the State and Private Forestry branch of the USDA Forest Service . One such program is the “Forest Stewardship Program,” which is designed to help landowners develop forest management plans for their land. The Forest Stewardship Management Plan provides the landowner with forest management suggestions to help them meet their goals, while at the same time keeping the ecosystem healthy. Another program is the Forest Legacy Program, which helps protects private forestlands from being converted to non-forest uses. Private forestland owners may also seek to become Certified Tree Farms, in which case they would gain assistance in creating a forest management plan from a volunteer forester of the American Tree Farm System. No matter which management plan or practice owners choose to use, the m anagement practices on private forestlands impact the social, economic, and natural environment for everyone.