Essay: Living in a Global Forest

Historically, people have used forests as a resource to sustain their basic needs, utilizing wood to cook food, heat homes, and to build shelter. During the late 1800s, predictions of a timber shortage in the United States caused many people to rethink their belief that trees were an unlimited resource. As a result of policy decisions and the resiliency of forests, the grim forecast never came true. Yet, forests around the world currently face considerable pressure. Increasing global population, rising material consumption and a growing gap between nations with high levels of industrial, technological, and economic productivity (developed) and countries with relatively low productivity in these areas (developing) has led to the rapid clearing of forests in many countries. Living in a "global forest" therefore suggests that people around the world must work together to conserve the world's resources. 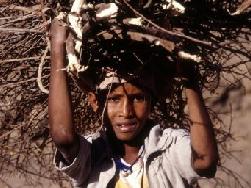 After World War II, many African, Asian, and Caribbean nations gained their independence from European colonial powers. The transition to freedom often led to political and economic instability. Faced with widespread poverty, population increases, and unstable governments, many of the former colonies struggled for survival. People cleared vast amounts of land for farming, used wood for cooking and heating, and sold timber to Western nations - all of which placed considerable strain on their forests.

Improvements in technology after the Second World War also affected the world's forests. The discovery of new oil reserves and advancements in the refinement of gasoline (from crude oil) caused a decrease in the price of the fuel. As a result, the popularity of cars and trucks increased and more American forestland was cleared to make room for highways. Gasoline also fueled equipment such as tractors and chainsaws. Instead of cutting down one tree at a time, people now could harvest many trees with less effort. Improved medical technology also added to the stress on forests around the globe as the elimination of some diseases and epidemics, and improvements in the quality of medicine, contributed to a surge in global population. With more people being born and living longer lives, the world's resources, including forests, face increased pressure.

Wood Consumption in the United States

The scientific management of forests adopted by many federal, state, and private organizations in the early 1900s, helped ensure that the predictions of a timber famine never came to pass. However, reason for concern about American forests still exists. Today, the U.S. consumes almost as much wood as most other raw construction materials such as plastic, aluminum, steel, and cement combined. On average, people around the world consume about 4 pounds of wood each day, but Americans use over three times this number - 14 pounds - on a daily basis. Increasing wealth in America, along with a population that has tripled since 1900, has led to great demands on forests in the United States.

Because of its low cost and abundance, wood was the most popular material for constructing homes during the 1900s. At present, the U.S. construction industry uses approximately 10% of the

world supply of industrial wood - most of which is used for building homes. Furniture and cabinets account for over 30% of American lumber consumption and 95% of homes in the United States use wood frame construction.

Although wood is the major building material for U.S. houses, homes have changed considerably during the previous century. Homes constructed during the early 1900s typically were smaller in size than modern homes despite the fact that more people occupied them. Even though American women had an average of 3.7 children in 1950, as compared to only 2.1 in 2000, the size of homes in the United States continued to expand. From 1970 through 2000, the area occupied by Americans in their homes (more than 72 square meters, or 775 square feet per person) has increased by nearly 80% and the number of homes built has tripled! The larger homes of the 21st century require much more wood for construction.

Concerns about increased American consumption of natural resources such as wood, encouraged the strengthening of conservation policies during the late-1900s. One aspect of this movement can be seen in the increase of forest land set-asides. By 1997, the government had reserved 52 million acres of land, about twice the acreage set aside by 1953. The federally owned forestland, mainly located in the western United States, is about the size of Kansas. Able to reserve the land because the demand for wood products could be met from private forests and other public lands, the U.S. government prohibited timber harvesting on the new parks and wilderness areas.

Today, the amount of forests in the U.S. remains more stable than in the past. In 1920, the amount of timber harvested exceeded forest growth by 50 %. However, only 32 years later the annual growth was greater than the annual harvest from all American forests. By 1996, timber growth surpassed the removal of trees by 47 %. As well, the improved efficiency of wood harvesting and manufacturing has also contributed to the stability of U.S. forests during the previous 50 years. 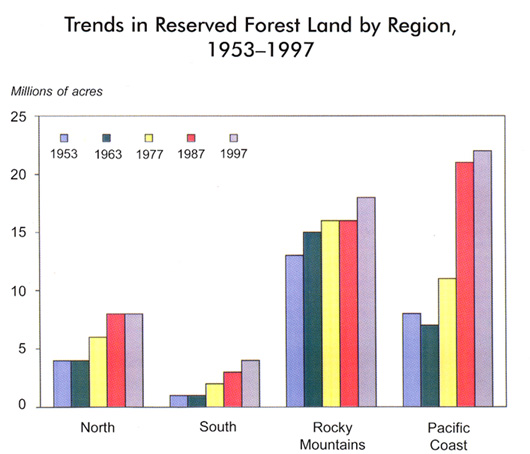 Consumption on the Rise 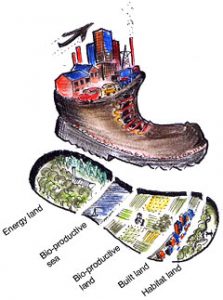 Despite recent efforts to conserve trees, forestland in the U.S. and abroad still faces great challenges. One cause of the uncertain future of forests is the consumption habits (use of goods and services by consumers) of people, especially those living in industrial nations like the United States. For example, Americans use an average of 220 pounds (101 kilos) of materials every day -- this total excludes food and fuel, but includes items such as chemicals in soap and shampoo, wood in newspapers, and metal in appliances and cars. And, whereas the United States leads the world in wood production, it also consumes more wood than any other country. Although the United States represents less than 5 % of the world's population, it consumes approximately 30 % of global resources.  In order to highlight the connection between consumption and the well-being of the environment, some experts use a research tool called an ecological footprint. Ecological footprints measure consumption by calculating the land area necessary to supply a population with its resources and the area needed to absorb its waste. The ecological footprint of the U.S. for instance, is larger than its land area. On average, Americans need about 25 acres (10 hectares) of land to provide all of the resources (food, clothing, houses, cars) they consume and to absorb the waste (CO2 emissions, garbage, sewage) they produce. Scientists estimate that if all people had the same lifestyle as the average American, we would need two more earths to sustain the world's population!

Many European nations and some Asian countries also consume large quantities of goods. On average, industrialized countries, which make up about 20 % of the global population, consume much more than the rest of the world. For instance, these nations use over 80 % of the world's supply of paper and cars. Although developing nations in Africa, Asia, and South America consume less than industrialized countries, they also impact the world's resources. Human population more than doubled from less than 3 billion to more than 6 billion between 1950 and 2000. Moreover, population projections (based on information from the United Nations and the U.S. Census Bureau) estimate that the world's population will climb to 9 billion by the year 2050. Today, the combined number of people living in Africa and Asia is almost three-quarters of the world's population. During the second-half of the 20th century, fuelwood and charcoal consumption more than doubled - the greatest increase occurred in the developing nations of the world. The sharp rise in population in many African and Asian countries has added even more pressure to regions already suffering from high levels of poverty. The widespread clearing of forestland for agriculture and the increasing wood consumption for cooking and fuel in many developing nations has caused concern around the globe.

Concerns about the Global Forest

The United Nations estimated that between 1980 and 1995, the earth lost about 445 million acres (180 million hectares) of forestland - an area about the size of Mexico. The majority of forestland lost was in the tropics of South America and in developing African and Asian nations. The United Nations and other international organizations have sponsored meetings to discuss the environmental problems facing the world. One important environmental conference, the Earth Summit (1992), included representatives from developing and developed nations (172 countries in all). The Summit proposed new guidelines to help countries find ways to improve their economies without harming the environment. One of the major agreements passed during the conference, The Forest Principles, emphasized the importance of sustainable management. Sustainable management calls for a balance between economic growth and environmental protection in which countries look for ways to manage renewable resources such as forests to meet the needs of the present without weakening the ability of future generations to meet their needs. Some critics argued that the conference fell short of finding a way to combat deforestation. On the other hand, the Forest Principles did serve as the first global agreement about the management of the world's forests and included suggestions for beginning a global effort to "green the world" through reforestation and forest conservation.

Despite the importance of global actions to respond to environmental problems, small changes on an individual basis can also help improve the environment. Educating people so that they can make informed decisions is an important aspect of sustaining the world's resources for future generations. For example, providing consumers with a product rating system outlining the environmental effects of the production and packaging of items such as clothes, computers, and food, may help people to make intelligent choices when making purchases. Moreover, although the ecological footprint of the United States currently is greater than its land area, individual changes can go a long way in changing this imbalance. By adopting some simple lifestyle changes (biking; walking; carpooling; choosing products with less packaging; and buying locally grown food and locally produced goods, for example), individuals can help conserve global resources.

No Easy Answers in an Uncertain Future

Globalization describes the growing connection between economies and cultures worldwide. American fast food restaurants in countries around the world, fashion and musical trends that extend beyond national borders, and the ability of the Internet to connect people living in different countries, all serve as evidence of the influence of globalization. Because we live in such an interconnected world, problems that affect one country often influence many others as well. Likewise, when a nation attempts to solve a complex problem, it can affect people a long distance away. For instance, if the United States limited the timber harvest on its own lands in an attempt to conserve American forests, but did nothing else, this simple solution would impact the world. If American wood consumption levels remained unchanged, but the national timber harvest decreased, the United States would need to obtain wood from other countries in order to meet demand. Therefore, even though American forests might benefit from this policy, forests in other nations might suffer.

Realizing that countries around the world are interconnected is an essential part of planning for the future. By adopting measures that allow for economic growth while also conserving for future generations, countries can meet their needs without depleting the world's resources. However, many challenges to sustainable management exist. Rising global population, increased consumption of wood and other natural resources, longer life spans, and confusion about how to implement sustainable management programs, all pose threats to the environment. In the years to come, many difficult decisions will have to be made that will impact the United States and the rest of the world. Intelligent consumption and an awareness of the growing connection between the countries of the world should help conserve the global forest for future generations.