Essay: From Forest to Farm to Urban Forest

Figure 1: One of the creeks running through the Korstian Division of Duke Forest. Duke Forest pamphlet, 199

Duke Forest is located east of the Appalachian Mountains in the rolling piedmont of central North Carolina. When the European colonists arrived in North Carolina, they found the landscape managed by Eno and Occoneechi Indians. Patches of land were cleared for agriculture and the forests were burned to increase game. The "Great Indian Trading Path" bisected the region, supporting diverse trade among the mountain and coastal tribes. The choice spots for trade and agriculture had been villages for hundreds of years. During the mid 1700's, waves of Scottish, Irish, English and African Americans settled on this landscape. Early settlers cleared the forest to build houses, plowed the land to grow corn, and dammed streams to turn water wheels that would grind their meal. Timber was harvested from woodlots for houses, barns, fences and house wares.

The most popular strain of tobacco prior to the Civil War was a dark variety grown on rich soil. Prompted by the demand of consumers for a more mild-flavored smoking tobacco, growers in the early 1800's began searching for ways to produce a lighter variety of tobacco. They experimented with less fertile soils and new curing methods. In 1839, Steven Slade, a slave of Caswell County, North Carolina, devised a formula that consistently produced a yellow tobacco or "bright" leaf. The new "bright" leaf was going to generate a fortune for an industrious Durham businessman and create a major corporation in the American tobacco industry. Washington Duke built an empire paying good money to any farmer who would produce the big broad "bright" leaves. By 1873, the Duke tobacco business was curing around 125,000 pounds of smoking tobacco annually. For the next 40 years, entrepreneurial farmers planted acres and acres of the crop and Washington Duke and his family generated one of largest tobacco fortunes in the world. 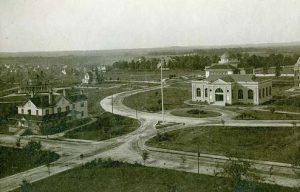 As lifelong Methodists, the Duke family practiced the kind of philanthropy encouraged by their church. In 1924, James B Duke, son of Washington Duke, invested a substantial amount of the family's fortune to expand the Methodist-owned Trinity College into a new university. He would honor his father by renaming it Duke University.

The new University was built to rival the prestigious ivy-covered universities of the Northeast. J.B. Duke built ornate Tudor Gothic architecture of imported stone. During the early phase of the University's development, the shrewd business experience of the tobacco man accidentally planted the seeds of what would become Duke Forest.
Ample land and good access to roads and water were cornerstones of J.B. Duke's successful tobacco factories. He recommended the same thing for the new University. After 40 years of intensive tobacco farming, most of the land surrounding Durham had lost its fertility and was rutted by gullies. Many farmers were willing to sell their land inexpensively. Duke bought enough land to build access roads to the highways leading to both Greensboro and Chapel Hill. For water access, he bought "Patterson's Mill", where two creeks entered the New Hope River. This tract was a particularly scenic piece of land with steep hillsides covered in native rhododendrons and huge rocks and cliffs along the stream bank. By the spring of 1925, Duke had 5000 acres in hand, many times more than he needed for the Gothic quadrangle of the main campus.

A School of Forestry was not included in the original list of professional schools to be established at the new University. The idea gradually took shape, however, in the mind of the University's President William Few as he spoke with colleagues and foresters around the country. He came to realize that the South's future prosperity depended upon the proper management of its forest resources and that a School of Forestry would promote sound forestry practices in the south. When Clarence Korstian, a senior forester in the Forest Service, toured the enormous land holdings at Duke, he liked what he saw. President Few liked what they heard when Korstian described his recommendations for the development of the forest as a teaching lab. In 1930, President Few made the decision to include a School of Forestry in the new University and hired Korstian to become the first director of Duke Forest and Dean of the School of Forestry. 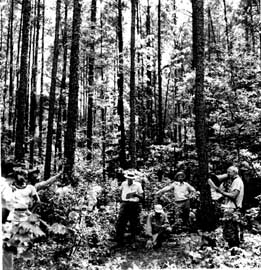 Clarence Korstian came to Duke with a vision. He wanted to take the best of what he'd seen at the schools of forestry at both Harvard and Yale to create a self-supporting demonstration research forest that would model scientific forestry practices. He wanted to use research to advance timber growing and use the forest itself as an outdoor teaching lab for silviculture students. He also wanted to prove that he could generate enough revenue from timber sales to pay for the forest management activities. He and his successors managed the landscape to fit these purposes for the next 70 years.

Duke Forest, today, is a maturing second growth forest of pines, oaks and hickories. On the land around Patterson's Mill, rhododendrons still cover the huge rocks and cliffs above the stream, making this part of the forest one of the most scenic in all the North Carolina piedmont. The Duke School of Forestry has matured as well. Today it is the Nicholas School of the Environment. The research carried out in the forest is about how to grow big trees and how to understand big ecosystems. Huge arrays of sophisticated technology are measuring the impacts of acid rain and global warming on entire ecosystems. One experiment is designed to help NASA understand the images of the earth gathered by the space shuttle. Another measures the impact of increased carbon cycles on forest growth and development. Without a large scale forest ecosystem at hand, this research would be impossible. Duke's Nicholas School of the Environment is respected world-wide for its emphasis on both ecosystem and global research...to Urban Forest. The region surrounding Duke Forest has changed as well. Due to a thriving research and technology park located in the triangle between Durham, Raleigh and Chapel Hill, the Durham has experienced rapid population growth and urban development. Duke Forest is now bounded on all sides by housing, shopping areas, and roads. The constant need for more housing puts pressure on all undeveloped land inside the city. In such an environment, there is incentive for selling off parts of the forest to developers to generate money to support other projects of the University. Meanwhile, the large patches of urban forest throughout the city and county provide area residents with many benefits. The spongy soil on the forest floor absorbs and holds rainfall in heavy storms. The vegetation holds the soil and prevents erosion. The leaves remove dust, chemicals and carbon from the air. The forest deadens noise and reduces glare. The beauty of scenic roadways, shaded sidewalks, and ready access to nature has enriched the city's tax revenues. With over 300,000 people visiting the forest each year, Duke University has a large population of stakeholders who are very passionate about the benefits of this urban forest to their community. 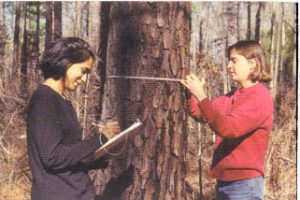 Figure 4: Students measuring the diameter of a loblolly pine as part of a Duke University’s Nicholas School of the Environment Field Class.

From forest to farm to urban forest, the trees of Duke Forest tell a story of on-going transformation of the landscape. From Eno and Occoneechi hunter-gatherers to colonial farmers, from farms of