This document was written in 1793, 60 years after the settlement of Petersham. This section on Petersham was excerpted from the larger document. Notice the old fashioned sentence structure and wording.

This was an original grant made by the General Court, in the close of the year 1732, or beginning of 1733, to John Bennett, Jeremiah Perley, and others, as a compensation for services performed by them in the Indian wars, under a Capt. John White of Lancaster. The first meeting of the grantees was held on the 10th of May, 1733. Some time after the grant was made, to quiet the Indians who claimed the soil, the proprietors made them a satisfactory consideration therefore. It is rather more than six miles square. It had been a seat for Indians, and was called many years by its Indian name, which was Nichewaug; and in the south part of the town lies Nichewaug Hill, so called by the natives, whereon, as in some other parts of the town, they had formerly planted fields of Indian corn, of which there remained evident traces when the first English settlers began there.
While in its infancy, and struggling for life, so early as 1744, a French war broke out, and the Indians, being always in the interest of the French, they became hostile, and began to commit depredations in various parts of the land, which occasioned the few inhabitants great fear, terror and danger, obliging them to build forts in different parts of the town, round certain houses, into each of which a number of families moved for safety and defense, and soldiers were stationed there as a guard to the inhabitants, and to reconnoiter the country. The people used to labor on their lands, in small parties, changing works with one another, having their guns by them, and these also they were, for a long time, obliged to carry with them whenever they went to the house of God for religious worship, and also to place sentinels at the doors. But although they were often alarmed, yet no white person was ever known to be killed in the place. When peace was settled between England and France, and danger and fear from the Indians ceased, the settlement of the plantation went on very rapidly, and the people were become so numerous and able, as that the place was incorporated with all town privileges April 20th, 1754, and received the name of Petersham.

The natural situation of the town is exceedingly beautiful; it is very high, but not hilly and uneven: The body of the town lies upon the highest land in it, which is a very large long flat hill, upon the highest part of which the great road runs from the south to the north, eight rods wide, and set with trees on both sides, and for three or four miles in length affords a most commanding prospect, not only of the whole town, but of all the adjacent towns. The houses are large and well finished, standing on either side of the street, from whence the land falls each way east and west, about a mile and an half to a stream, and then rises again, especially to the east, where it is fully settled. It is in clear view on the main street, and appears like another town.

The land in this place is exceedingly favorable to the growth of all kinds of fruit trees, being high and warm; and here are large and excellent orchards, and much cyder is made here, beyond what the inhabitants consume; but they find a ready market for the surplus in the newer settlements.

The soil is rich and fertile, and the lands bear all kinds of grain, but most natural to grass and pasturage, and from the appearance and face of the town, we must judge the inhabitants to be industrious and wealthy, who subsist mainly by the cultivation of the earth. Though the town lies very high, yet the land is not dry, but stony and moist, abounding with springs and brooks of water; there are, however, but two noticeable streams: Swift River, which rises from springs in Gerry, runs to the southwest, through the easterly and southerly part of Petersham, into the northwest part of Hardwick. West Brook, a considerable stream, rises in the northwesterly part of the town, and runs through all the west side of it, and then enters Greenwich, in the county of Hampshire. On each of these there are both corn and saw mills, and clothiers' works; and by the sides of both there are considerable bodies of good meadow land. Here are works for making pot and pearl ash, where much business is profitably carried on, and many persons employed. On the high lands the growth of wood is oak, more chestnut, and a great deal of walnut of later years. In the swamps and low lands, there is birch, beech, maple, ash, elm, and hemlock. This town is situated sixty six miles from Boston, nearly west, and about twenty eight miles from the courthouse in Worcester to the northwest, and is bounded on the north by Athol; on the east, by Gerry and Barre; on the south, by Barre and Hardwick; and on the west, by Greenwich and New Salem, in the county of Hampshire. 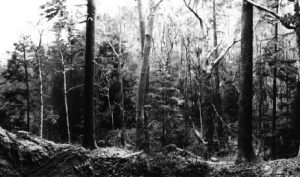 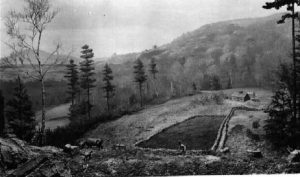