By the late 1800's, with the countryside so abandoned and unsightly, newspapers ran headlines announcing a "Timber Famine". The U.S. government responded by establishing the United States Forest Service. Colleges and universities responded by opening schools of forestry. Harvard University was one of the first.

In 1907, two graduates of Harvard offered the University a large tract of land in Petersham for their new School of Forestry. The Research Forest became a year-round headquarters for professional foresters studying silviculture and forest management. Harvard has continued to manage the 3000 acres of forest land ever since. Today mixed hardwood forests cover nearly 85% of the landscape in Petersham.
Since its establishment, the Harvard Forest has served as a base for research and education in forest ecology. Today, this research and education continues as the faculty, staff and students seek to understand historical and modern changes in the forests of central New England resulting from human and natural disturbance. 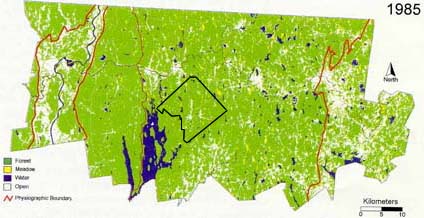 Research conducted by academic foresters reveals that the vegetation in Harvard Forest today is different than the forest the colonists found in 1733. The forest the colonists found was a two-tone forest quilt, with northern hardwood on the cooler highlands and oak hickory on the warmer lowlands. Chestnut ran through both forests as did patches of white pine. Today the canopy is more like one large piece of mottled cloth, a jumble of hardwoods with no relation to highlands or lowlands. Research is currently underway to determine why.

The use and management of the upland forest ecosystem--first called Nichewaug Hill, then Prospect Hill, and now Harvard Forest--is a classic case study of American forestry. Embedded in this 400-year history is the evolving story of people using their forests. The Native Americans managed the landscape to supply game, boats, housing materials, and small scale farming. The early colonists subsisted on the land, clearing it for agriculture and harvesting for fuel, tools, and housing. The industrious Petersham farmers capitalized on neighboring markets to generate capital and improve their standard of living. Once the land was protected by Harvard Forest, professional foresters researched and demonstrated the practice of silviculture. Today, the Harvard foresters are measuring and recording the successional changes to find out about the ecological vitality of second growth forests. When left to mature for 100-150 years, the central Massachusetts forest was able to come back, but different from its original condition. The hills and swamps of Petersham bear witness to an ongoing and intimate relationship between people and their forests.