From Forest To Farm and Back Again

The rich history of Petersham, Massachusetts makes an excellent case study for understanding what happened to the New England forest ecosystem after European colonists arrived. Although 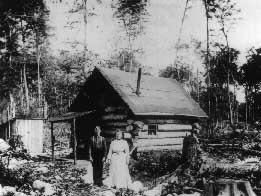 specific dates for the change from forest to farm and back again may vary from region to region, a similar pattern of clearing forests, farm abandonment, and returning second-growth forests occurred in most regions of the United States.

The forest ecosystem in central Massachusetts in the 1600s was a subtle patchwork of two types of mature forest communities. In the warmer, lower elevations, the most common trees were oaks and hickories where chipmunks, flying squirrels, turkey, blue jay, and deer grew fat on a diet of acorns, pignuts, walnuts and mocker nuts nosed from under the brittle autumn leaf fall. On the higher, cooler highlands of central Massachusetts, beech, sugar maple, and hemlock made up the hardwood canopy. Red-backed voles, snowshoe hare, red squirrels and porcupine joined the deer gathering seeds under the leathery autumn leaf fall. Ribbons of white pine and chestnut trees flowed through both forest types.

The Native Americans living in the forests were a group of Algonquin-speaking people referred to as the Nipmuc (see below, 'The Nipmuc People'). The Nipmuc cleared small patches of land in the village they called Nichewaug for Indian corn, squash, beans, and tobacco. They also burned the forests regularly to clear large swaths of the forest to improve habitat for game animals. They harvested all the materials to build their homes, transportation, and house wares from the trees in the forests with stone tools and fire. Narrow saplings were used for wigwam and long house poles. Large yellow birch trees were hollowed out to make canoes--the Nipmuc's primary vehicle of transport. Inner bark of white oak was turned into lashing, rope and thread. Hickory bark was used to tan hides. Sugar maple sap was boiled into syrup.

Figure 2: Many Massachusetts place names (including the name of the state) have Algonquin origins. Quon-e-ticut is Algonquin for long, tidal river.
Source: Facts on File 1994

Continue to Part II of Essay