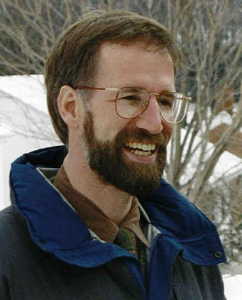 On 30 April 1999 the Forest History Society launched its Lynn W. Day Distinguished Lectureship in Forest and Conservation History at Duke University. Historian William Cronon presented the first lecture in the series. His lecture offered thoughts about the state of contemporary environmentalism and its philosophical foundations. The lecture was an extension of the discussion that began with his essay “The Trouble with Wilderness; or Getting Back to the Wrong Nature” in the January 1996 issue of the Society’s journal Environmental History. The essay was also the first chapter of Cronon’s book Uncommon Ground: Toward Reinventing Nature.

William Cronon is the Frederick Jackson Turner Professor of History, Geography, and Environmental Studies at the University of Wisconsin-Madison. A Rhodes scholar and former professor of history at Yale University, he is the recipient of many awards, among them a MacArthur Fellowship. He is a prolific author and editor of articles and books, most notably: Nature’s Metropolis: Chicago and the Great West (New York: W. W. Norton and Co., 1991); Under an Open Sky: Rethinking America’s Western Past (New York: W. W. Norton & Co., 1992); and Uncommon Ground: Toward Reinventing Nature (New York: W. W. Norton & Company, 1995; William Cronon, editor).

In Dr. Cronon’s “The Trouble with Wilderness; or Getting Back to the Wrong Nature” essay in Environmental History, he makes the core argument that “It’s as important to reflect on what we THINK about nature and about our complex physical relations with the natural world, as it is to reflect on those physical relations themselves. The nature we carry in our heads is as important as the nature that is all around us, because in fact the nature inside our heads is often the engine which drives our interactions with physical nature, transforming both ourselves and nature in the process.”

He continues “Perhaps most provocatively, wilderness embodies an ancient dualism in which the human and the natural stand in opposition to each other: wilderness, by definition, is the place where human beings are not, and our presence can only sully if not destroy it. This dualism is a very problematic foundation on which to try to construct an environmental movement that takes full responsibility for the moral challenge of living sustainably on the earth.”

These assertions sparked considerable debate among some environmentalists. Dr. Cronon’s critique of wilderness as a human idea that is not by itself an adequate foundation for environmentalism led some to question his sympathy for the movement as a whole, but he argues to the contrary that, in fact, environmentalism will be more successful in its larger goals – including the protection of wilderness – if it broadens its philosophical and political foundations. In his current lecture Dr. Cronon attempts to open up an alternative space for dialogue. He further explains that wilderness survives in a cultural space, and that it will only survive if we consider the cultural, political, and economic context under which wilderness is designated. Dr. Cronon then presented ten theses to begin to define what a Humanist Environmentalist defense of wilderness might look like.

Among his key claims were the following:

“Nature is all we’ve got: we are never outside of it, and our lives depend on it. A humanist environmentalism must constantly attend to the natural context within which human beings make choices and live their lives, taking care always to preserve, protect, and honor the non-human creatures and systems whose survival is crucial to our own, and whose health and safety and right to exist are no less valuable than ours.”

“Historical understanding of our own ideas of wilderness and nature gives us greater self- knowledge, greater self-criticism for recognizing what it is we are projecting out onto the world; that which comes as much from within us as from the world itself. This is not to deny the existence of the world but to acknowledge that knowing the world is a much more difficult enterprise than it appears. Taking the world at face value almost always means accepting human assumptions about the world that may not be inherent in the world at all.”

“Non-use is not an option: to live in nature is to use and change it by our presence. The choice we face is not to leave no marks–that is impossible–but rather to decide what kinds of marks we wish to leave.”

“Although we may seek values and ethics that are less anthropocentric, we should never fool ourselves into believing they can be anything but anthropogenic: they come from us, from our dreams and fears and histories. Struggling to make them fit the world as we are given to understand it is our never-ending challenge, because nature itself does not speak in a language of “values.” Even if we carry 90% of all species to extinction and ourselves as well, nature won’t care. We’ll just be another extinction event in the accumulating stratigraphy of the globe. Whatever we do will be fine with nature… but it will not be fine with US. The responsible environmental ethics we defend are grounded as much in human values and motivations as the environmentally destructive values we seek to replace. Biocentrism is an anthropogenic value. Values are impossible without a self-reflective consciousness projecting its goals and desires forward into the future and imagining their good and bad consequences–that is what humanity adds to nature, that is what leaves us anxious about whether we stand inside or outside the magic circle of the natural. We hold ourselves morally accountable within our circle of language in a way we hold nothing else in the universe accountable.”

“Wilderness is a crucial measure of our success in building a more just and humane environmentalism, because wilderness will only survive if our culture, our political economy, our ideas and values, honor and sustain the space in which it survives–a space that is not just ecological but moral, political, cultural. But that will only happen if we abandon the dualistic illusion that it is separate from ourselves. It could hardly be more connected, and our every act affects it.”