The Soundtrack to the Documentary “The Greatest Good” 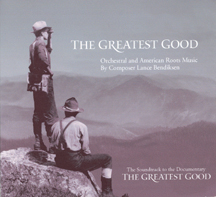 “This Project is dedicated to all the foresters, past and present, for their heroic work in protecting and preserving our National Forests.” – Lance Bendiksen, composer and producer.

About the composer:
Brooklyn-born producer and musician Lance Bendiksen’s career began on the stage. As the son of a rehearsal pianist mother and an off-Broadway singer father, he easily adapted to the troubador lifestyle. Prior to his role as independent producer, he had performed in over 3000 shows and released four of his own records. Beginning in 1993, as Staff Producer/Studio Manager of Colorado’s Avalanche Recording, he worked in conjunction with KBCO to produce studio performances such as Sarah McLachlan and The Cowboy Junkies, while also overseeing numerous recordings for MTV and over two hundred local, regional and national projects.

In 1996, he created his own company, Bendiksen Productions, as an independent resource for television, radio and film which he expanded in 2001 to include original music production and artist development. In addition to a combined forty years of industry experience in music production, management and publicity, Bendiksen and his staff utilize a large talent pool of A-list session players, engineers and music business professionals. He has been honored with a 2000 Silver Telly (PBS production – There Was A Time), a 1997 Emmy for Best Theme Music (PBS production – Lifewise), an Aurora, and many Colorado Broadcasting Awards.