Here at Peeling Back the Bark World Headquarters we occasionally like to get our fingers a little dusty by digging through the vinyl record collection in the FHS archives. Our collection may be modest, but it's full of vintage forest-related audio treasures. One of our favorite items from the collection is undoubtedly the self-titled album from Lausmann's Lousy Loggers Band. Everyone who sees the album gets a kick out the band's name as well as the photos inside the record sleeve. But who were these guys?

The Lousy Loggers were a band made up of members all with connections to forest industries. Here's how the group was described by the Western Conservation Journal: "The story of the barkclad bards who keep the loggers dancing is an inspiring example of men dedicated to a rewarding purpose. Each Lousy Logger earns his bread in a job related to bringing in the trees. Each donates his time and pays his entire expenses -- instruments, travel, convention board and room; everything. As a group, they give and ask nothing back except that their friends, the loggers, swing their partners."

The band was led by the legendary Anton "Tony" Lausmann (1889-1978), founder of KOGAP Lumber Industries in Medford, Oregon. Lausmann was certainly a character. He could easily be spotted by either the ever-present cigar in his mouth, or the concertina in his hands -- and oftentimes with both at the same time.  In addition to founding KOGAP, Lausmann's long forest industry career included serving as director of the Oregon Forestry Center, the Industrial Forestry Association, and the National Lumber Manufacturers Association. But what brought him the most joy (and fame) was his concertina -- or "squeeze-box" -- which he was said to have carried with him just about everywhere since he was a kid.

It was Lausmann's commitment to carrying his concertina that led to the Lousy Loggers name. In 1958 he was on a voyage by ship to Hawaii with a group of Shriners. Asked to entertain the passengers with his concertina, Lausmann was eventually joined by other "musicians" on board playing the harmonica, tin cans, and other improvised instruments. A fellow passenger asked what the name of the group was, and another one of the Shriners yelled out "Lausmann's Lousy Loggers." The name stuck.

That same year Lausmann was invited to play at the Pacific Logging Congress Annual Convention. He recruited some forest industry musician friends and the official Lousy Loggers Band was born. Following a successful debut at the 1958 Pacific Logging Congress, the group performed for much of the next two decades at various conferences and conventions, mainly in the Pacific Northwest. The band recorded their one and only album in 1972. At the time of this recording, the band included Lowell Jones on the keys; Gene Pickett on trumpet and trombone; three men on sax and clarinet -- Clifton Crothers, Bill Preuss, and Vince Bousquet; Jack Bennett on drums; Dave Totton on bass; and Rex Stevens on vibes. Other past members of the group included Howard Smith, Jim Bigelow, Stu Norton, Clyde Lees, Ed Pease, Phil English, Gene Duysen, and Tony's son Jerry Lausmann.

The group officially disbanded in 1976 and Tony Lausmann passed away two years later. In his obituary he was remembered as "best known and revered for his leadership in organizing the west coast's well known and popular Lausmann's Lousy Loggers Band." For a sampling of the group's work, enjoy the audio slideshow below created by librarian extraordinaire Jason Howard. And for more on the unique character that was Tony Lausmann, we recommend the book Swivel-Chair Logger: The Life and Work of Anton A. "Tony" Lausmann, which can be found in the FHS Library. 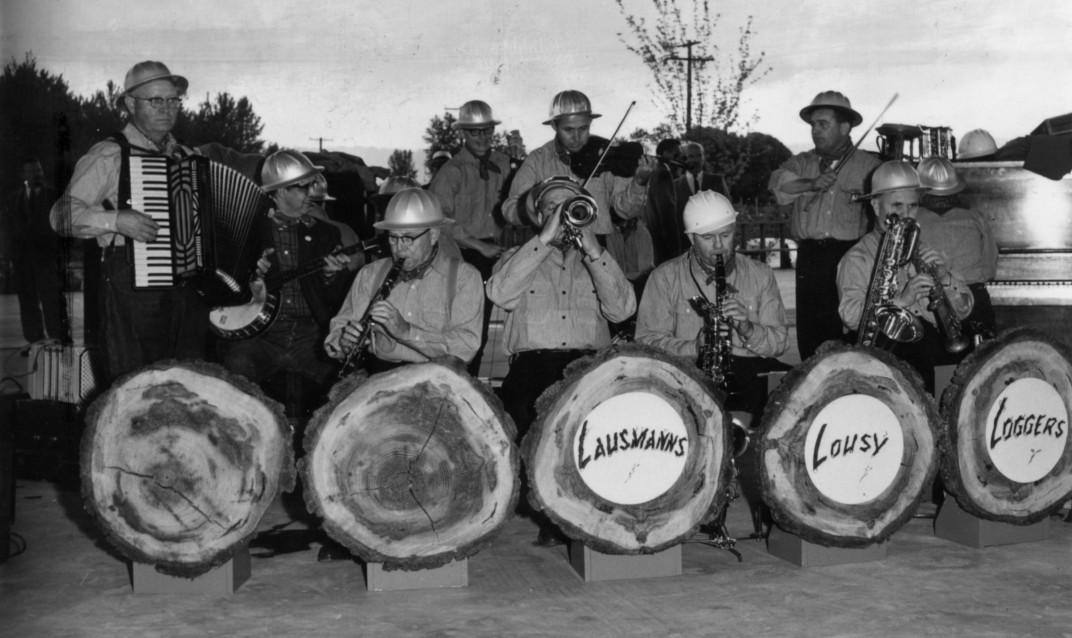