On this day in 1874, Raphael Zon was born in Simbirsk, Russia.  From Russian radical to New World immigrant, Zon achieved national and international influence as a forest researcher.  Gifford Pinchot even proclaimed, "Mr. Zon is my old and valued friend. . . There is no higher authority in forestry in America."

In Simbirsk, Zon studied at the classical gymnasium.  At this school, Alexander Kerensky's father acted as director and Lenin was an older classmate.  Later, Zon pursued studies in medical and natural sciences at the University of Kazan, graduating with a bachelor's degree in comparative embryology.

In his early life, Zon had a history of political agitation and subsequent imprisonment in his native land.  While a student, Zon engaged in political activity, especially pressing for representative government in Russia, for which he was periodically arrested.  Then briefly assigned to the international zoological station in Naples, he was investigated for helping to form the first trade union at Kazan in 1894.  With the help of future Duma leader Alexis Aladin, Zon escaped his 11-year sentence of confinement. 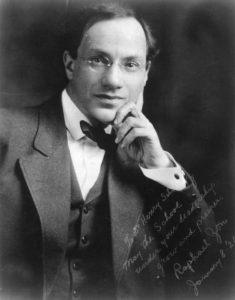 Inscribed: To Henry Schmitz*, May the School under your leadership grow and prosper. Raphael Zon, January 8, 1926.

Fleeing westward, Zon studied natural sciences, political economy, and philosophy at universities in Belgium and London.  In 1897, Zon arrived in New York City with a mere fifteen cents to his name.  Zon soon left his temporary job at a drugstore for Ithaca, New York, where he enrolled in the nascent New York State College of Forestry at Cornell University.  Studying under Bernhard E. Fernow and Filibert Roth, Zon earned his degree of forest engineer in 1901, becoming a member of the school's first graduating class.

On July 1, 1901, Zon entered the U. S. Forest Service as a student assistant assigned to forest investigations.  Six years later, he was promoted to Chief of the Office of Silvics (later Forest Investigations).  Zon made a persuasive and persistent case for separating research work from forest administration, achieved in 1915 with the establishment of the Branch of Research.  Zon's advocacy of research led to his organization of the first Federal Forest Experiment Stations and the Forest Products Laboratory.  In order to advance the war effort, Woodrow Wilson appointed Zon to the National Research Council to study forest problems during World War I.  In 1923, Zon left Washington, D.C., to accept appointment as director of the Lake States Forest Experiment Station at St. Paul, Minnesota, in 1923.  In this position, Zon served with distinction until his retirement in 1944.

Throughout his official career, Raphael Zon exercised a national influence on the development of forest research not surpassed by any other American forester.

Pioneering studies of the relation of forests, streamflow, and flood control, Zon relayed his findings in his 1927 work, Forests and Water in the Light of Scientific Investigation.  Initially attacked, Zon's theories became widely accepted.  Pinchot called Zon's report "the most comprehensive and authoritative statement" on the topic.  Forests and Water was reprinted and translated into several languages. 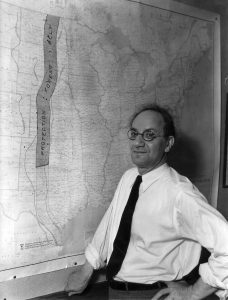 Dr. Zon made significant contributions to forestry literature.  Many of his more than 200 scientific publications have been translated into Russian, French, German, and Japanese.  With Bernard Fernow, Zon helped establish American forestry's professional periodical literature.  Zon's connections began when he joined the editorial staff of the Forest Quarterly.  He deepened his involvement, becoming editor of the Proceedings of the Society of American Foresters in 1905.  When Forest Quarterly and Proceedings merged, Zon became one of the founders and the first managing editor of the combined publication, the Journal of Forestry.  His tenure lasted until his resignation as editor-in-chief of the Journal of Forestry in May 1928.

In one arena, though, Zon's ideas failed to gain permanent acceptance. In the early 1930s, with the Great Depression bearing down on all including the timber industry, Zon joined fellow socialist Bob Marshall in pushing Gifford Pinchot to call on the federal government to take over all private timberlands as the only way to end the destructive logging practices and save the remaining private forests from degradation. While some of what they envisioned was partially realized with the passage of the Lumber Codes under the National Industry Recovery Act and through the Civilian Conservation Corps' work, Zon's radical stance divided the forestry profession. This and other controversies he stirred ensured his reputation as an agitator.

Within the Journal of Forestry community, Zon stirred controversy with viewpoints derided by some as socialistic.   On June 13, 1934, Zon submitted to the Journal a petition on behalf of a group of twelve forestry leaders.  The petition criticized the publication, stating the "vital problems of forestry are overlooked or discussed not from a social standpoint or in the spirit of the New Deal" and that the journal "lacks the spirit of social leadership which was once a distinguishing characteristic of the profession."  The petition called for editorial changes, including the separation of the offices of executive secretary and editor-in-chief, new qualifications for editor, and establishment of editorial independence.  In response, the Council issued letters to the general membership body, asking for responses to questions raised by or related to the Zon petition.  From the five folders of highly charged letters we hold in the Society of American Foresters Records, the petition garnered support from some members and raised the ire of others, who in particular seemed to object to the "broad social ideals" espoused by the "Twelve Disciples."

Below, you will find one 3-page letter that addresses Zon's missteps (with some loaded language) while also acknowledging his capabilities. 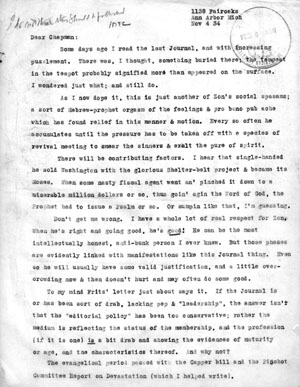 From these fascinating and impassioned communiques and the Council's analysis published in October 1934, one can understand why Zon has been labeled a gadfly.  Even his detractors acknowledged his ability to spark debate!

In 1940, Raphael Zon's efforts were recognized beyond professional circles.  In connection with the World's Fair, Zon was named one of the 600 foreign-born citizens who were judged to have made the most notable contributions to American democracy within the past 100 years.

Zon's technical research and publications "covered the waterfront" of forestry. . .  Not only as a searcher for forest facts, but as a scientist attuned to the human responsibilities of his profession, this Russian expatriate of inquiring mind and high standards deserves to be remembered in the annals of the U. S. Forest Service and of American forest history.

To Raphael Zon, we say «С Днем Рождения» and thank you.

* Henry Schmitz was a professional forester and leader at the School of Forestry at the University of Idaho.