Over 300 historic U.S. Forest Service photographs from California were recently added to our image database, thanks to a collaboration with USFS Region 5 (Pacific Southwest). Matthew Stever, a Region 5 Heritage Photo Project intern, organized and scanned a large number of previously uncataloged photographs from the region, and digital copies were added to the FHS online image database. The photos come mostly from the San Bernardino National Forest, range in date from the 1910s to the 1960s, and cover a broad array of topics including forest rangers at work, fire prevention, fire suppression, recreational activities, and the Civilian Conservation Corps. The collection also highlights some lesser-known pieces of California history, such as the story of Camp Cajon.

At a time when long-distance auto travel was still relatively new, Camp Cajon became a nationally known rest stop along an important route into southern California. For travelers during the 1920s and 1930s -- long before the era of interstates, rest areas, and ubiquitous hotel chains and fast food restaurants -- Camp Cajon provided a roadside stopping place, complete with facilities for eating, camping, and much more.

The camp was the brainchild of citrus grower William M. Bristol, who had a moment of inspiration while attending the dedication ceremony of the Pioneers Monument in December 1917. This monument to early settlers was erected along the National Old Trails Highway in Cajon Pass, at the junction of the Salt Lake and Santa Fe Trails (north of San Bernardino, along present-day Interstate 15). While at the dedication, Bristol came up with the idea of building a welcome station and rest area in Cajon Pass as a "gateway to southern California."

Bristol returned to the area following World War I, pitching a tent in Cajon Pass during May of 1919 and intending just to stay a few months. Instead of building a few picnic tables and heading back to his orchards as originally planned, Bristol soon found himself immersed in a large-scale project which would continue on for years.

On land donated in part by the Santa Fe Railroad, Bristol began his work by building picnic tables. A master craftsman, Bristol designed and built a unique series of large round concrete tables, which would come to define the site even as it expanded. 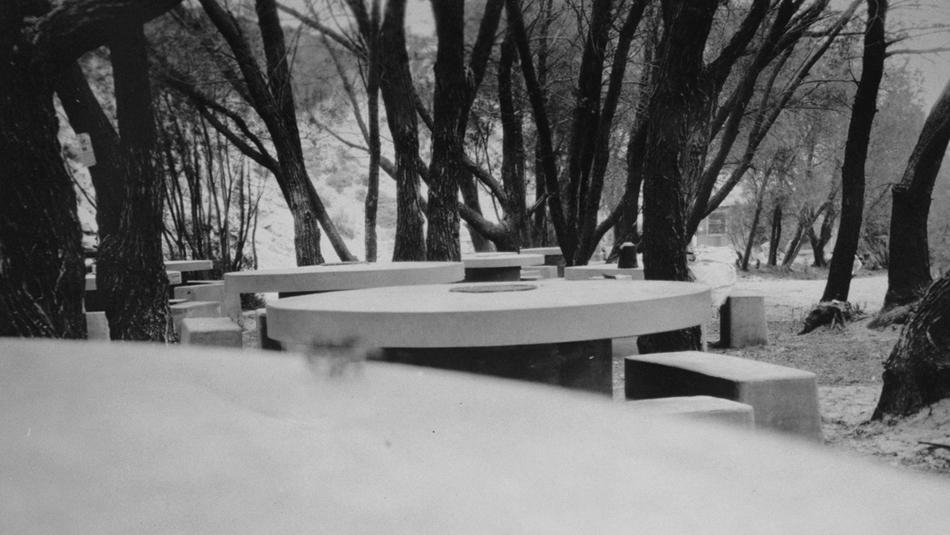 The initial dedication ceremony for Camp Cajon was held on July 4, 1919. A poem written especially for the event by Jennie Cook Davis was read, a quotation from which was set on a tablet in a stone sign marking the camp's entrance:

"We have builded a shrine to friendship, good-fellowship and cheer,
That all who cross our threshold may find refreshment here."

The camp quickly grew as sponsors provided funds for more picnic tables, large stone cooking stoves, massive barbeque pits, bath facilities, and more. The Elks Club built a stone lodge building, and a store and post office even sprung up. These facilities provided a place of much-needed comfort for motorists just emerging from miles of desert. The rest stop, picnic area, and free campground became well known nationwide as a can’t-miss stopping point along the route into southern California. A headline from a 1921 Los Angeles Times article summed this up: "Camp Cajon Takes Cake for Comfort, Gives Motor Travelers Great Welcome as They Come in from Desert." 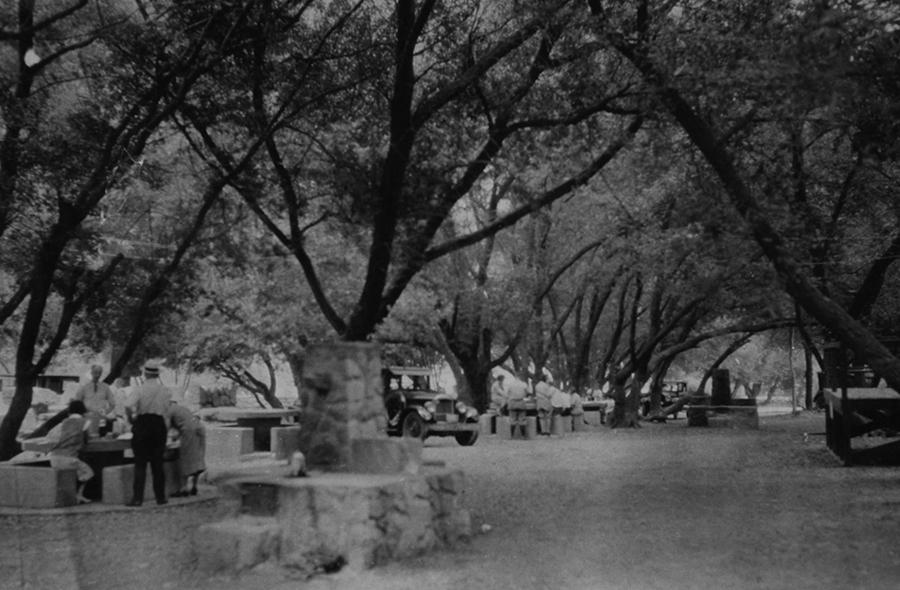 The legend only grew in 1926 when the National Old Trails Highway became part of Route 66, and the country's iconic east-west highway ran right through Camp Cajon.

Unfortunately, Camp Cajon’s time was ultimately short-lived. Devastating floods during March of 1938 completely destroyed the camp, burying the facilities under piles of rocks and sand. Less than 20 years after Bristol began construction of the first picnic table, the camp was left in total ruin.

Three years later the Camp’s founder would end his own life. Bristol, a vocal proponent of euthanasia, took his life rather than continue suffering due to a debilitating illness. Ever a craftsman to the end, Bristol built his own wooden coffin by hand, got inside and shot himself.

No trace of Bristol’s once famous camp is left in the original Cajon Pass location today. The Camp Cajon site sits near a McDonalds on the edge of Interstate 15 just south of its intersection with Highway 138. While the camp was buried and built over, pieces of Bristol’s work still live on elsewhere. Several of the original concrete picnic tables from Camp Cajon were salvaged, and can be found in Lytle Creek and Perris Hill Parks in the city of San Bernardino.

Continue below to view Camp Cajon photos from the collection. To browse additional Region 5 photos, search all fields for: "0512_*" (which is the ID# prefix for the images added as part of this project).