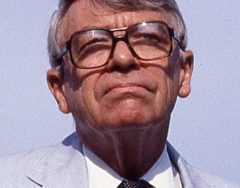 Former Forest History Society (FHS) board member John M. Collier (1921-1987) is remembered for his prolific career as a forest industry journalist through the annual presentation of the Society's John M. Collier Award for Forest History Journalism. Collier covered the forest industry, represented the best of the profession with thorough research, solid interpretation, and clear writing throughout his career. The Collier Award was established in 1987 to honor his memory, and is given to a journalist whose work incorporates forest or conservation history in an article or series of articles published in North America that relate to environmental issues.

John M. Collier was born in Vicksburg, Mississippi, on May 21, 1921. He was a Phi Beta Kappa graduate of Tulane University and spent nine years as an investigative reporter for the New Orleans Item prior to joining the U.S. Army. In 1954 he started a longtime career with the Southern Pine Association (Southern Forest Products Association). In 1962 he was appointed advertising and publicity director for the organization and was their vice president at the time of his retirement. Throughout his long career he wrote for many newspapers and trade journals. He died in January 1987.

Collier was a former member of the Forest History Society's (FHS) board of directors. Following his untimely death due to cancer, longtime friend and colleague H. P. Newson, a past president of FHS, recommended that an award be established to honor Collier. In response, the Society established the John M. Collier Award for Forest History Journalism in 1987. John Collier represented the best of the profession with thorough research, solid interpretation, and clear writing throughout his career, and FHS is proud to present the Collier Award in his memory.