On June 12, 1941, the nation’s first Tree Farm was dedicated. The 120,000-acre Clemons Tree Farm in Washington, owned by the Weyerhaeuser Timber Company, received that designation with great fanfare—Washington Governor Arthur Langlie and other dignitaries were on hand for the ceremony. From that one property in the Pacific Northwest has grown a movement that now is international in scale. As the American Tree Farm System® (ATFS) celebrates its 70th anniversary, there are more than 88,000 private landowners sustainably managing 26 million acres.

Prior to 1940, most commercial-grade timber came from industry-owned lands. While fire was a concern on all forest lands, the Weyerhaeuser Company took an active interest in changing public attitude about fire prevention because of fire’s impact on the company’s holdings. Heavy use by hunters, fishermen, berry pickers, and vacationers posed a fire hazard to reforestation efforts on their tract in Grays Harbor County and elsewhere. By the summer of 1941, Weyerhaeuser had built an infrastructure of lookout towers, telephone lines, and roads to make fighting fires easier. Then to impress upon the locals the need for preventing fires, the company invited the public to tour the forest they now called a Tree Farm. It was leadership by example, something the ATFS has been doing ever since. 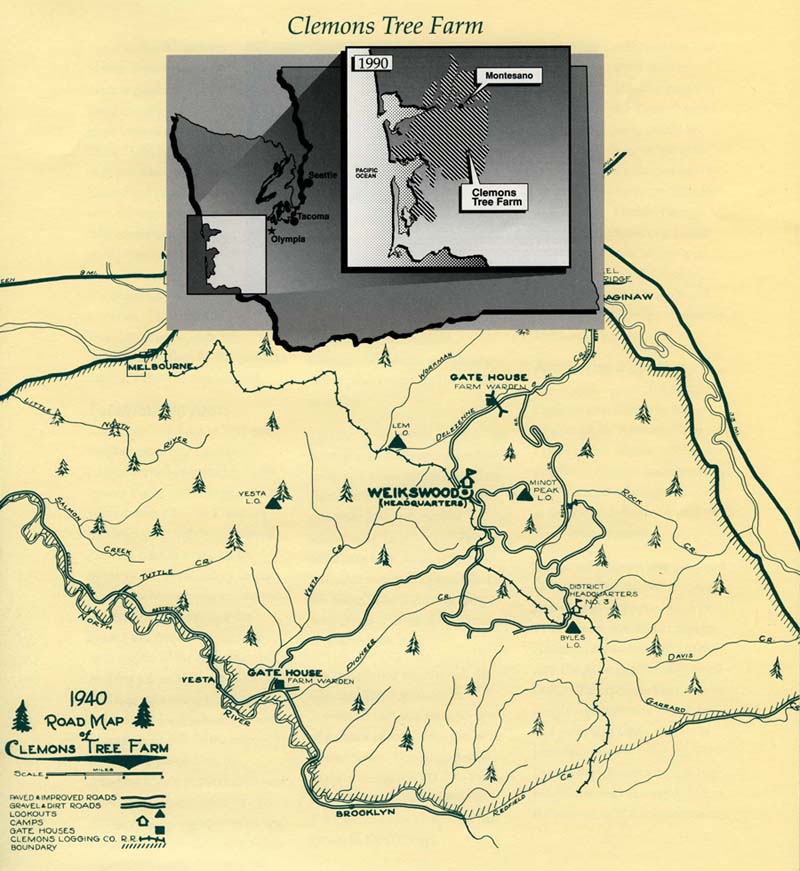 The Weyerhaeuser company came up with the term “tree farm” because, it was argued, “everyone knew that a farm was for growing repeated crops of agricultural products” and what they were doing was growing repeated tree crops. The plan for unveiling the Tree Farm concept included naming the farm for an area figure—pioneer logger Charles H. Clemons—and holding a public dedication ceremony. About 500 people packed the Montesano Theatre for the ceremonies. In his address, Governor Langlie told the throng, “The Clemons Tree Farm may form the experimental basis that may mean a great deal to the entire state. It may set the pace for millions of acres of such lands throughout the state.” Little did he know that it would set the pace for millions of acres throughout the nation as the American Tree Farm System.

You can learn more about the history of the ATFS from this 70th anniversary article in the organization’s magazine, Tree Farmer. This 1949 article from Agricultural History provides an excellent examination of the founding and early struggles of the organization. And you can learn more about our archival holdings and follow a link to historical photos of the ATFS from this blog post by FHS archivist intern Shaun Trujillo.

In June of 1951, another crowd gathered in in Montesano, Washington, to celebrate the tenth anniversary of the Clemons Tree Farm. A plaque was unveiled commemorating the 1941 founding, and in attendance were William B. Greeley, Wilson Compton, J.P. Weyerhaeuser Jr., and Mrs. Charles H. Clemons. At the time of the ceremony, over 4 million Douglas-fir seedlings had been planted on Clemons Tree Farm land. By the end of the tenth anniversary year, the American Tree Farm System had already spread to 33 states.

By the time of the 25th anniversary in 1966, every state other than Alaska and Hawaii had officially joined the American Tree Farm System. Promotional “Silver Anniversary Dollars” were produced to commemorate the occasion.

The 40th anniversary of the American Tree Farm System was held in North Carolina on June 12, 1981. Participating in the festivities was actor and celebrity tree farmer Andy Griffith. Every state now featured a tree farm, with Alaska and Hawaii having joined the ATFS in 1974 and 1975, respectively. By the end of 1981, more than 40,000 tree farms managed a total land area exceeding 80 million acres.

The Tree Farm System began the 1990s with more than 70,000 tree farmers managing some 93 million acres. The 50th anniversary in 1991 (“50 Years of Growing Trees . . . And More Than Trees”) featured a new round of commemorative promotional items, such as trucker hats.

The 60th anniversary also marked a full 25 years of the Outstanding Tree Farmer Award. This award, begun in 1976, honored tree farmers who have shown an outstanding commitment to sustainable forest management.

Simple signs like this marked the entrances to the first tree farm. Today the familiar green and white diamond logo identify properties in the American Tree Farm System and their purpose: sustainable management of forests for wood, water, recreation, and wildlife.

In the first decade of the twenty-first century, AFTS decided to focus exclusively on family forest owners—who, notably, own more forest land in America than industry owners. New certification standards focus on the needs of woodland owners managing smaller woodlands. ATFS now provides tools and on-the-ground support to 88,000 family forest owners sustainably managing 26 million acres. The program is still going strong as it moves towards its eighth decade. In August, the 2011 Tree Farmer Convention will take place in Albuquerque, New Mexico. FHS Historian Jamie Lewis and Archivist Eben Lehman will be on hand to make a presentation about the history of ATFS and the ATFS records housed by the Forest History Society and to exhibit our publications.