The helicopter landed exactly on time. It was 1 p.m.

The door opened and became a ramp and this man came out.

It was the start of a hectic 70-minute visit by Pres. John F. Kennedy to Grey Towers in Milford yesterday afternoon. 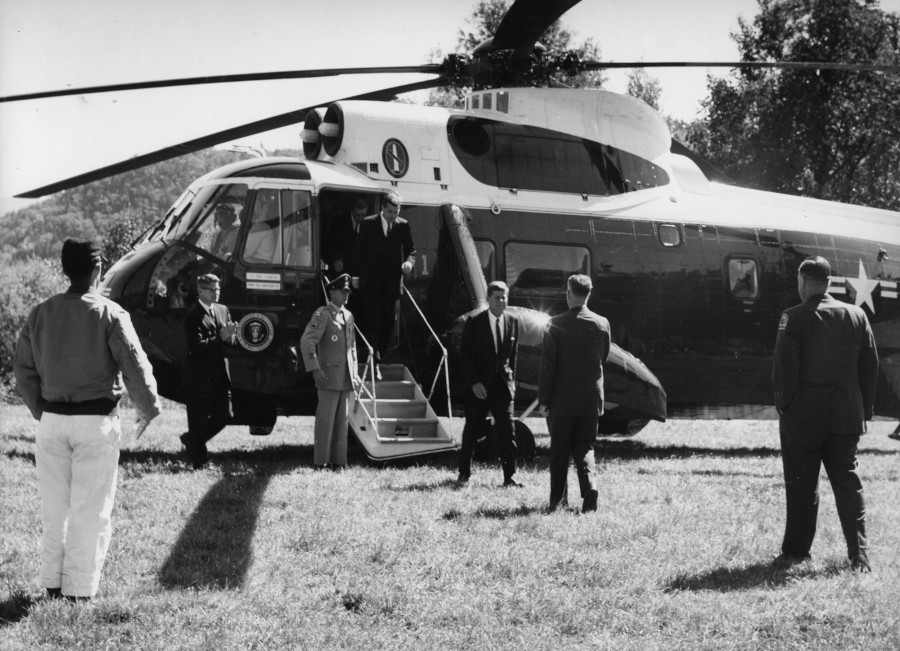 Mr. Kennedy, dressed in a neat blue suit with a faint pin stripe, white shirt and matching tie, moved towards a waiting convertible with the inevitable secret service men providing a way through the press of the crowd. The familiar shock of brown hair looked lighter than it does in most pictures and the white teeth shone in a constant smile. He is deeply tanned. 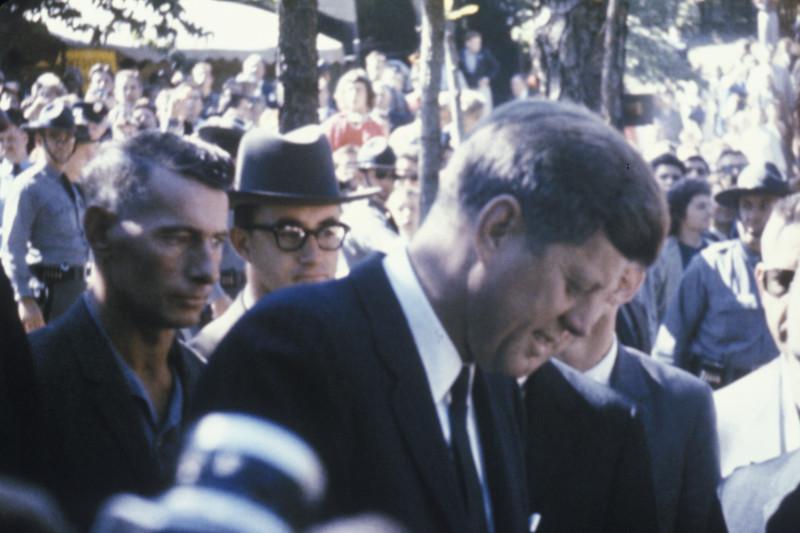 The president entered the third car in the six car entourage that moved slowly through a field to the road leading to Grey Towers. The road was lined with state police, foresters and Milford fire police. The landing field was some 200 yards from the amphitheater where a crowd estimated at over 12,000 waited. Some had been there since early morning, coming to get a good place to stand in front of the 20-foot stage where the ceremonies were scheduled to be held.... 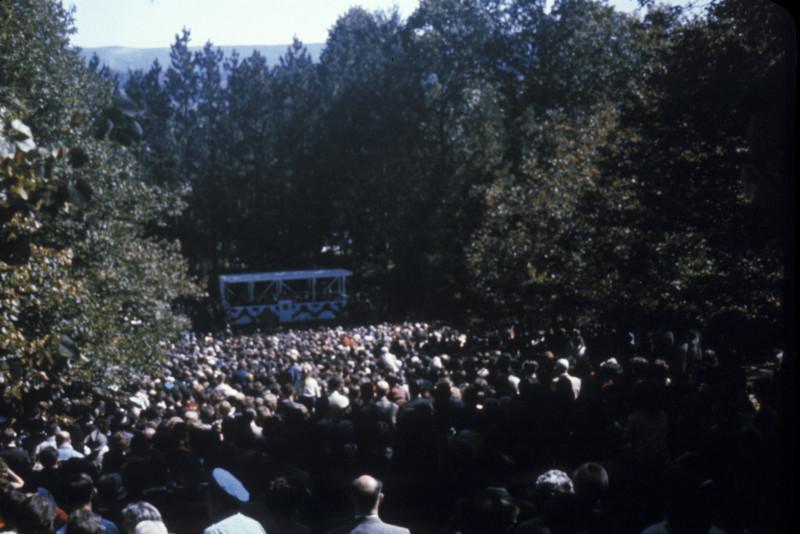 But as the hour neared 1 p.m., the expectation grew and then the great mass of people suddenly knew the president had arrived for the audible noise of the copter blades sounded across the valley even though the Delaware Valley high school band was providing musical entertainment. There was a tingle of anticipation that rolled through the sea of humanity even though it would be another 15 minutes before the president would be seen by most of them.

It was a perfect day. Pennsylvania's Gov. Scranton said later in his speech that it was typical weather for the state and who could dispute it. It was warm. A heavy frost had covered the area in the morning but the sun warmed the earth and by noon it was anything but cool. There was not a cloud in the blueness of the sky.... 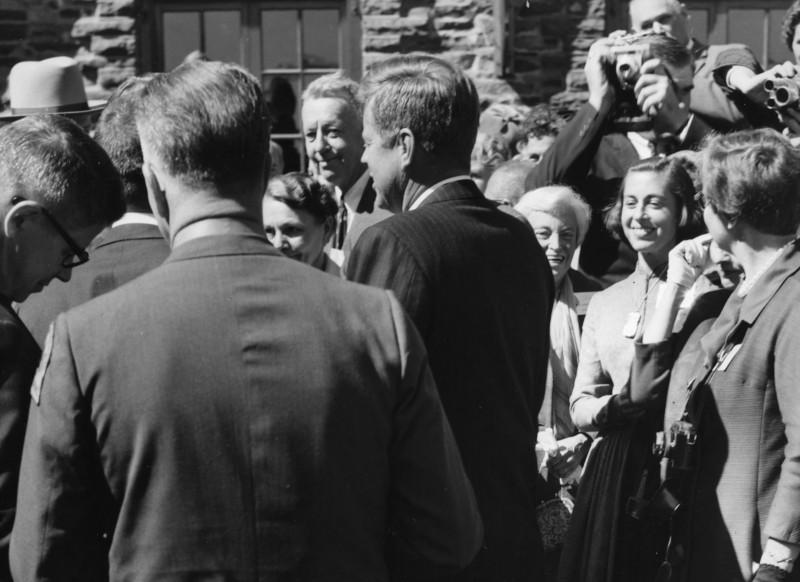 The president stopped off at Grey Towers and for some ten minutes was greeted by area officials and conservation men from all over the country. He met with them on the terrace and the crowd was enlarged by the stream of reporters and camera men who surged in for information and the hundreds and hundreds of photos that were being taken along almost every stop of the way. 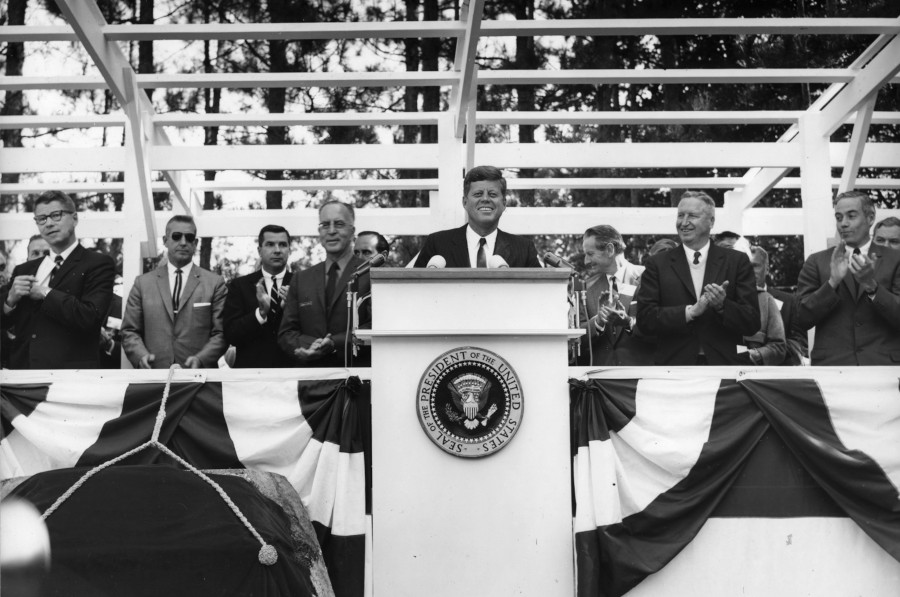 The president gets a warm reception from the crowd and from those on the stage with him: (l to r) Secretary of Agriculture Orville Freeman, Chief Cliff, President Kennedy, Samuel H. Ordway, and Penn. Governor William Scranton.

It was 70 minutes that would be hard to account for if you had to list every minute but it was, for most of the people, a highlight in their lives that grandchildren not yet born are destined to hear about.

That's how it was.

This breathless article was written by a newspaper columnist from the town located across the river from Milford, PA. It was one of many that appeared in the Port Jervis Union-Gazette the day after President Kennedy paid a brief visit to Grey Towers to dedicate Gifford Pinchot's home and the establishment of the Pinchot Institute for Conservation Studies on September 24, 1963. This issue, as well as a special commemorative souvenir edition of the Union-Gazette published the day before Kennedy's visit, can be found in the U.S. Forest Service History Collection here at FHS.

The trip to Grey Towers was the start of a grueling 4-day, 11-state tour for the president that the New York Times said was "dedicated to conservation but tinged with politics." But on that cloudless day in Milford, the last thing on the minds of the overflow crowd was politics. They were there to see the president dedicate the estate of Gifford Pinchot, the hometown hero, to the cause of conservation. On September 21, 2013, another crowd will watch as dignitaries gather to commemorate that great event and rededicate the home and the institute that bears Pinchot's name.

In addition to Dwyer's article excerpted above ("The Day JFK Was Here"), the September 25th Union-Gazette also included an account by Norman Lehde, "JFK's Visit Thrills Thousands," and a look at the special preparations made for the president's visit to Milford (3 miles of telephone cable!) in "Behind the Scenes for the JFK Visit."

The collection also contains the original event program from the day, which lists the speakers and guests of honor, along with the transcripts of the remarks given by President Kennedy, Secretary of Agriculture Orville L. Freeman, and Samuel H. Ordway, president of the Conservation Foundation.

1. Dan Dwyer was a longtime columnist with the Port Jervis (NY) Union-Gazette and a Pulitzer Prize nominee. He interviewed Presidents Eisenhower, Kennedy, and Johnson, each time nabbing the interview simply by writing them a letter and asking for an interview. His interview with LBJ took place in the Oval Office and lasted 40 minutes.