The Year When Turkeys Were Used to Fight Forest Fires

There’s no better time than Thanksgiving week to look back at some of forest history’s famous turkeys. While we’ve previously looked at how turkeys changed forest history by upending timber policy in the 1960s, it’s due time to highlight a pair of birds.

“Sir Keep Oregon Green” and “Chief No Fire” were two large 40-pound fowls who ended up as central characters in the fire prevention efforts of Oregon and Washington in 1950. The previous year’s fire season had been a bad one in the Pacific Northwest—1949 was the worst year for human-caused fires since the influential Keep Green fire prevention campaigns were launched in Washington and Oregon. The Keep Washington Green and Keep Oregon Green programs (established in 1940 and 1941, respectively) had been incredibly successful in educating the public about the importance of forest fire prevention. But 1949 was a set-back. Washington suffered through 2,578 forest fires, while Oregon saw even more with 2,603. A new incentive for improvement needed to be found.

On May 15, 1950, the gauntlet was thrown down. Addressing nearly 200 people at the Keep Oregon Green annual governor’s dinner in Portland, Oregon’s governor Douglas McKay directly challenged his Washington counterpart, Arthur B. Langlie, to best the Beaver State’s fire prevention record that year. McKay then suggested they wager. On behalf of the Evergreen State, Langlie immediately accepted the challenge.

The stakes of the bet were set soon thereafter. Each governor put up a large turkey: “Chief No Fire” from Washington and “Sir Keep Oregon Green” from Oregon. The state with the lower number of fires would be the victor. The winning governor would accept the live bird following the conclusion of that year’s fire season.

With only 1,071 fires, Oregon won, while Washington ended up with 1,246. The Evergreen State, however, would claim a moral victory as its total acreage burned was less than Oregon’s. A bet is a bet, though, and in November 1950 Governor Douglas McKay accepted “Chief No Fire” on behalf of the people of Oregon in a public ceremony. 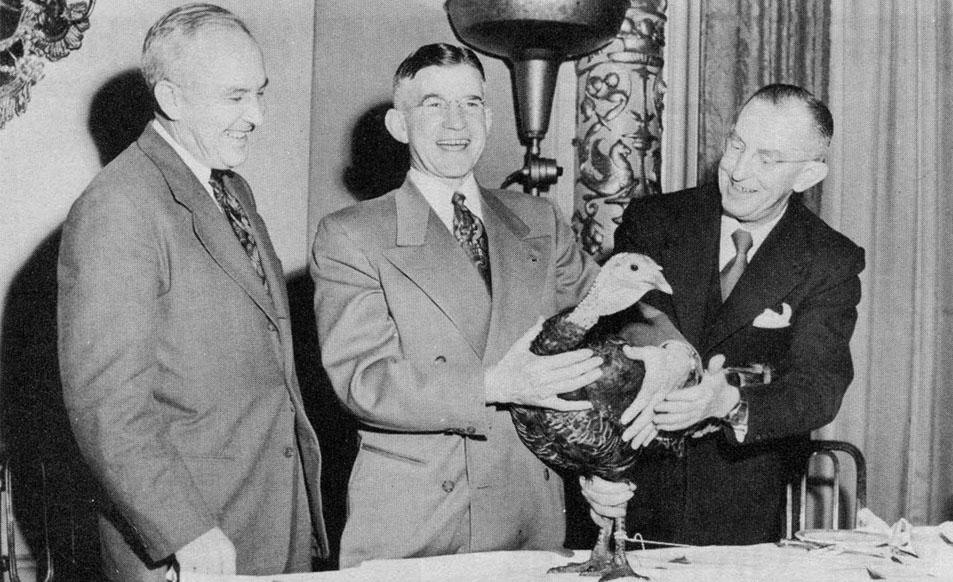 There’s no record of what ultimately happened to the turkey prize. Chief No Fire may have been officially pardoned, or ended up on the governor’s Thanksgiving table. We may never know. Regardless, the wager proved to be a success as both states significantly reduced the number of total forest fires, and the collective publicity helped further grow the Keep Green campaign. For that we here at Peeling Back the Bark World Headquarters raise a glass of Wild Turkey this Thanksgiving to two of our favorite gobblers from history: “Chief No Fire” and “Sir Keep Oregon Green.” Gobblers, we hardly knew ya.