Forgotten Characters: "Ev’rett the Friendly Evergreen" and the war on Christmas

Everyone knows Smokey Bear, Woodsy Owl, and maybe even Ranger Rick Raccoon, but there are many other forest and forestry-related fictional characters that long ago fell by the wayside. Peeling Back the Bark‘s series on “Forgotten Characters from Forest History” continues with Part 6, in which we examine Ev’rett (the Friendly Evergreen).

In the 1950s, a new front opened in the War on Christmas. The first front had opened with a presidential ban on Christmas trees in the White House in 1902 out of concern for natural resources. A half-century later, Christmas trees made of aluminum or plastic had become so commonplace that that the plot of “A Charlie Brown Christmas,” which first aired on television in 1965, revolves around this idea of artificial trees having replaced natural trees. Artificial trees were so commonplace that when Charlie Brown and Linus see a single wooden tree alone on the tree lot full of artificial ones, Linus asks Charlie Brown, “Gee, do they even still make wooden Christmas trees?” To CB, the dominance and pervasiveness of artificial trees represented how disconnected Americans had become from the spiritual and religious roots of Christmas. Having a natural tree helps him and his friends reconnect to the true meaning of Christmas, as expressed in a heart-tugging soliloquy by Linus.

As the 1960s drew to a close, the artificial tree industry was cutting deeply into the sale of natural trees and growers were in a panic. The National Christmas Tree Growers’ Association (NCTGA) decided to do something about it. Like a plot from an old Hollywood musical, they respond to this attack on tradition with—a song! One can picture Mickey Rooney as the son of a Christmas tree farmer who’s on the brink of bankruptcy during the Great Depression. Having overheard the mean banker (maybe Lionel Barrymore as Mr. Potter from “It’s a Wonderful Life”?) tell Mickey’s father that unless he can pay the mortgage, he’ll lose the farm. Desperate and inconsolable, Mickey turns for comfort to his gal played by Judy Garland, who then sings “Have Yourself a Merry Little Christmas” to cheer him. Afterward, they talk and hit on the idea of writing a song and then Mickey says, “Hey kids! Let’s put on a show!” The show (and the movie) end with the unveiling of a new song Mickey wrote celebrating natural Christmas trees, “Ev’rett the Friendly Evergreen.” It’s a smash sensation, and the show saves the farm! Roll credits!

Take a listen and tell me that this doesn’t save the farm.

Well, that’s how it would have played out in the 1930s film version. The contemporary version would be closer to the truth—a little darker and with an ambiguous ending.

As the war on Christmas trees heated up in the 1950s, natural tree retailers fought back with efforts like spray-painting trees white or deeper shades of green to make their products more alluring. But they kept losing ground in the war on Christmas. Adults found the ease of artificial trees very appealing—no trips to a tree lot or haggling over the price, no ensuing struggle to bring a tree home, clean-up of dropped needles, or wrestling to remove the tree from the home. To replicate the pine smell, they could use a scented spray. Moreover, states and localities had tried banning trees from public places or even homes because natural trees posed a fire hazard.

At a loss over what to do, in 1968 or ‘69, somebody on the Public Relations Committee of the NCTGA hit on the idea of commissioning and recording a song that celebrates the joy of having a natural Christmas tree (and takes a not-so-subtle swipe at the artificial tree industry), then having tree retailers buy copies of it to hand out or sell with each tree they sell. Songwriter John LoBuono penned a catchy little ditty that the NCTGA Trustees “unanimously acclaimed Number One on their Hit Parade.” The “original” Anita Kerr Singers would do the vocals for the A-side; the B-side was “an instrumental variation that appeals to teenagers” called “Ev’rett’s Tune.” The distributed recording credits “The Evergreen Singers” as the vocalists, and the record was distributed on the EV label (created by the NCTGA).

On September 22, 1969, a recording of the basic version of the song was sent to all NCGTA members with an information letter and order form. It was a red flimsy vinyl record the size of a 45 that you played at 33-1/3, the kind companies used to give away in cereal boxes and magazines. As you can hear, the sound quality of the floppy wasn’t bad, and there’s something charming about the simple arrangement of the song as compared to the full version that can be heard here. 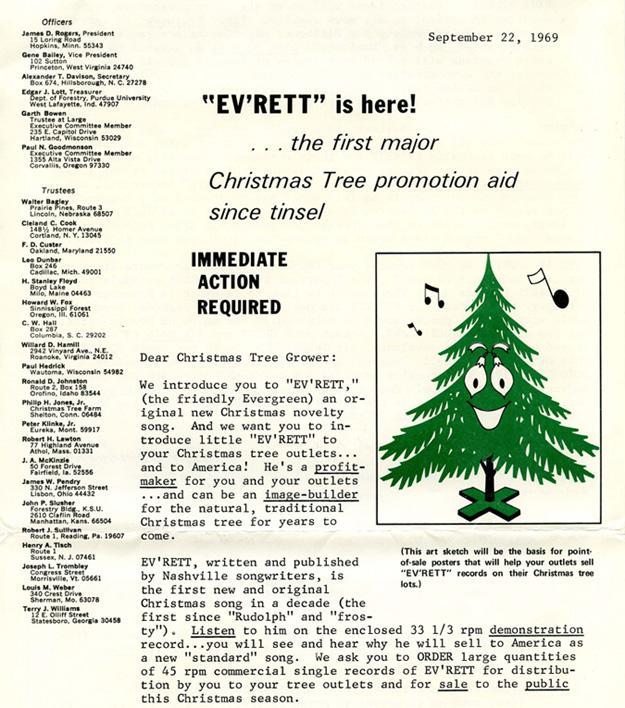 The idea behind the recording was two-fold: pop music was a great way to reach kids. There had not been a popular new Christmas tune since “Rudolph the Red-nosed Reindeer,” or so the promotional literature claimed, and this aural vacuum could be filled by the Ev’rett song. Second, send families home with a tree and a record, and soon kids of all ages would be rockin’ around the natural Christmas tree singing its praises. Convince them of the superiority of natural trees, and they would in turn persuade their parents to keep buying a natural tree year after year. And kids who grow up with natural trees might grow up and buy them as adults, thus ensuring the future of the natural Christmas tree industry. Fred E. Klopp, a grower and retailer in Milwaukee, knew it wasn’t enough to hand out records to tree buyers. He bought 1,000 Ev’rett records and distributed them to radio stations and a jukebox supplier as a more efficient means to reach potential buyers.

The folks at the NCTGA also recognized that cartoon characters would also appeal to kids, so they had someone design Ev’rett with ornaments for eyes and a cheery smile. After all, nothing says “Christmas” and “secure financial future” like an anthropomorphic tree.

Fifteen thousand records were pressed and 13,500 were sold in the three test areas of Milwaukee, Chicago, and St. Louis. In addition to Fred Klopp’s purchase of 1,000 copies, Calvin Frelk in Merrillan, Wisconsin, purchased 2,000 copies and also gave some to radio stations. The records came with Ev’rett posters to display on the tree lots. Frelk, a field general in the war on Christmas, summarized the situation: “We as growers cannot sit back complacently and let the artificial tree business continue to grow,” he declared. “Each grower has to do his part.” It was all hands on deck.

Growers and retailers complained that the record came out a little late to be truly effective. To aid the cause the following year, the Public Relations Committee established a new service for retailers to foster better communication between growers and retailers. Subscribers received a Public Education Action Kit that included an Ev’rett record. But interest in the kit was underwhelming and so the record didn’t catch on with retailers. After 1971, NCTGA’s quarterly magazine American Christmas Tree Journal doesn’t mention the Ev’rett record again. The committee had gone in a different direction. They opted for a vinyl tag that retailers could attach to fresh trees touting its benefits. Once celebrated on vinyl, Ev’rett was replaced by tree-shaped vinyl.

Yet the war on Christmas trees continues. Every year at this time, articles appear discussing the pros and cons of natural versus artificial trees. The NCTGA (now the National Christmas Tree Association) remains front and center in this debate. In the last few years, the argument has centered on the issue of the size of the tree’s carbon footprint. Is the footprint of an artificial tree, made of non-biodegradable materials and manufactured halfway around the world but might last 10-15 years, smaller than a natural tree, which may have been raised with the aid of pesticides and herbicides, shipped some distance by a gas-burning vehicle, and sits on an artificially lit tree lot? Well, the arguments really haven’t changed in seven decades, just the terminology; they’re still so basic that they were simplified and captured in song in 1969. Here it is again with a video featuring photos from our collection.

Do you remember hearing “Ev’rett (the Friendly Evergreen)” at tree lots or on the radio? Were you one of the lucky ones to own a copy of the record? If so, tell us about it in the Comments section.

The copy of “Ev’rett (the Friendly Evergreen)” we digitized belongs to Jane Lawrence, whose father was a Christmas tree farmer in Colorado Springs. He received his copy in 1969 and never opened it, and she held onto it all these years in its pristine state. She loaned it to us at the National Tree Farmers Convention this past August to preserve in digital form. We are deeply indebted to her for the loan.