"Spotted Bear" is one of the oldest known names in the Flathead National Forest. This name has been attached to a river, a mountain, and a Forest Service Ranger Station in the South Fork area.

The story of how this name originated was related to me years ago by the late Harry Wilson, one of the more rugged individuals who trapped and prospected for a living in this country. It was in the winter of 1933-34. Wilson invited Ranger Albert Campbell and me to spend the night in Wilson's cabin on Sullivan Creek. We were making a big-game study in the area. During the evening, Harry told us his version of how the name "Spotted Bear" came into being. I've never heard any story to the contrary.

Wilson explained that back in about 1861, two prosperous California miners were looking for a guide to pack them through the mountains to the east side of the Continental Divide. Inquiring at the Hudson Bay Trading Post at Selish for a good guide, they were referred to Baptiste Zeroyal, better known as Felix Baptiste or just Baptiste. Few men in those days were more familiar with this wilderness area than Baptiste.

Because the Blackfeet Indians were on one of their more-or-less perpetual "warpaths" at that time, Baptiste decided the best route to travel was up the South Fork and Spotted Bear Rivers and down Sun River. One day on the journey, while camped near the mouth of the Spotted Bear River, they saw a black bear with an unusual amount of white on its breast and underside. Thus, the name "Spotted Bear" was created.

An incident that could, perhaps, be tied in with this 1861 trip was the discovery, in 1924, of two bullets deeply embedded in the wood of a 20-inch fir tree during the clearing of the Spotted Bear Administrative Site. Over the old scar that marked the entrance of the bullets were the proper number of annual growth rings to coincide with the time of the 1861 journey through this area. The two bullet holes are only about an inch apart; their direction of travel indicated they were fired from the same angles and could have been the results of target practice. The section of wood showing the bullets is on display in the Supervisor's Office.

No difficulties with the Indians were encountered on the trip to the prairie; and Baptiste returned to his cabin on the South Fork, where he continued to prospect and trap until he died.

His body is buried near the remains of his cabin on Hoke Creek, just below Baptiste Creek, which bears his name. 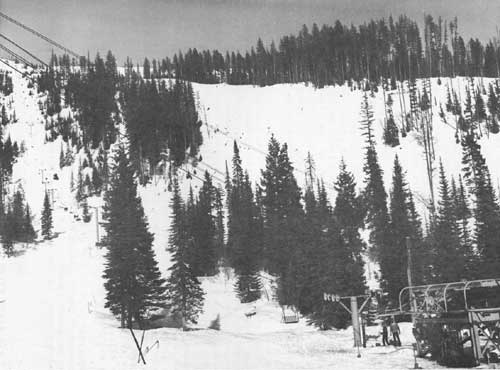