During the last decade of the 19th century, the first National Forests were created by Presidential proclamations. At that time little was known of this vast, forested area. The West had not been mapped. No one had more than a general knowledge of the West's large wilderness areas. To describe an area designated as a Forest Preserve, it was necessary to use natural topographical features, such as: The Rocky Mountain to the east, the International Boundary to the north, the heads of the Flathead and Swan River and their tributaries to the south, the Flathead Valley to the southwest, and so on until the National Forest's boundary was established.

President Cleveland created the Flathead Forest Reserve by proclamation February 22, 1897. Lewis and Clark and Flathead Forest Reserves were consolidated in 1903. When the area proved too large an administrative unit, it was divided into two Forests on July 1, 1908. One unit, known as the Blackfeet Forest, extended from Rexford to the prairie east of what is now Glacier National Park and south to the Great Northern Railroad, Columbia Falls, and to Lake Mary Ronan. The remainder of the Lewis and Clark Forest was designated as the Flathead Forest, bound on the north by the Great Northern Railroad, on the south by the divide that separates the Flathead and Swan Rivers from the Blackfoot River, on the east by the Continental Divide, and on the west by the Flathead Valley.

On May 11, 1910, President Taft signed legislation creating Glacier National Park. This National Park includes lands in the Blackfeet Forest Reserve. West boundary of the Park was the center of the North Fork of the Flathead River. The east boundary was the high waterline on the Middle Fork of the Flathead River; the Great Northern Railroad formed the southern boundary; the International Boundary to the north; and the Blackfoot Indian Reservation s west boundary marked the eastern border of Glacier National Park.

Only minor changes have occurred in the boundary of the Flathead National Forest since 1933. It now comprises an area of 2,625,427 acres; 2,336,400 of the acres are owned by the United States.

These early Supervisors provided their own horses, subsistence, and camp equipment from their annual salary of $1,000. Faced with a vast, unimproved wilderness with many complex problems, it was the duty of these Supervisors to protect the Forest from fire and trespass as well as to determine the many uses to be made of the Forest.

Ranger Frank Liebig built the first Ranger Station on Cedar Creek near the foot of Lake McDonald, in 1902. Ranger Stations were built at Coram and Spotted Bear about 1906 and two more in 1908, one at Tally Lake and one at Swan Lake. During this time, trails were being built and old routes through the mountains were improved. Road, trail, and telephone systems were carefully planned. Many of these first trails are either in use today or have been surpassed by Forest roads or oiled highways.

The first trail built in the Flathead Forest was the Danaher Trail, from Ovando to the Danaher Basin in the upper South Fork. It was built in 1903 and was 21 miles long. It is still one of the main trails entering the Bob Marshall Wilderness.

The Flathead Forest has eight Ranger Districts today. They are all on roads except Big Prairie, in the Bob Marshall Wilderness. There are now 1,509 miles of road and 2,760 miles of trail in the Flathead Forest.

National Forests are the same today as when they were first established before the turn of the century in that they are dedicated to the wise use of the resources for all the people. Just what constitutes wise use is exemplified in the general policy laid down in 1905 for the Forest Service by the Secretary of Agriculture in his instructions to the Foresters:

"In the administration of the forests reserves (called National Forests since March 4, 1907) it must be clearly borne in mind that all land is to be devoted to its most productive use for the permanent good of the whole people, and not for the temporary benefit of individuals or companies... In the management of each reserve (Forests) local questions will be decided upon local grounds; the dominant industry will be considered first, but with as little restriction to minor industries as may be possible; sudden changes in industrial conditions will be avoided by gradual adjustment after due notice, and where conflicting interests must be reconciled, the questions will always be decided from the standpoint of the greatest good of the greatest number in the long run."

This general policy is the basis for multiple use management of the National Forests today. 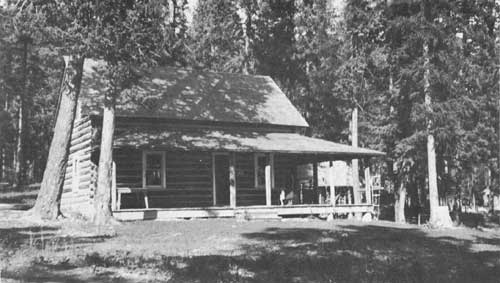