About the time the Forest Reserves were established (1891-1907), the number of game animals was at a very low ebb. Range conditions indicated game was in need of better protection and management. At first, the Forest Rangers did not have the authority to enforce State game laws. Soon it was determined this authority was necessary, and it was added as one of the Rangers' duties.

The first mention of elk in the Flathead National Forest was by Colonel Severs about 1874, while making a reconnaissance with a detachment of army engineers for a possible route for a railroad through the South Fork. They came upon a band of elk near Mud Lake between Black Bear and Big Prairie. They shot one for camp meat. The report doesn't state the number of elk they saw but it is believed they were an uncommon sight in those days. It is known that Lewis and Clark, on their trips through the area south of here in 1805 and 1806, saw little or no elk or buffalo west of the Continental Divide. They reached the coastal range on the Columbia River before they found elk.

The actual number of game animals on a timbered, mountainous range can never be determined accurately; but range conditions will always indicate whether there are too many or too few. Hunting pressure in the Flathead Forest was not heavy until the 1930's. At this time, it was advertised that there were too many elk for the range. Also, the nation was experiencing an economic depression; and people wanted meat. Estimates of the number of animals in a given area are the product of someone's imagination. I say this in all due respect to the judgment of the Forest and State officials who have made these figures available for these reports. I think that I personally have made as many guesses as anyone in the last 30 years. The estimate of elk on the Forest for the past 30 years has varied from 4,000 to 6,000 head with no set pattern or trend to indicate changes in the condition of range. I feel the spread is much greater than this. I believe the early 1930's saw more elk on the Flathead than at any other time. The estimates of actual number have always been conservative. The number has fluctuated at times due to winter climatic conditions, but gradually has become fewer and fewer until today (1964) it is at about its lowest ebb. This statement is strictly my own personal estimate; no game estimate can be taken as gospel truth. Range conditions tell the story. 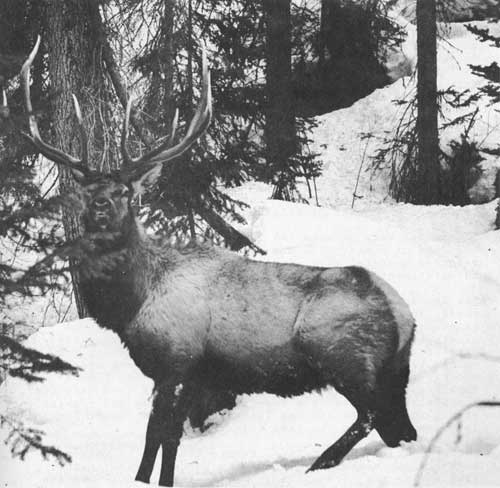 Hunters' kill records are, of course, more accurate than population estimates, but they too involve a certain element of human judgement and are, therefore, subject to human error.

Forest records over the past 30 years range from 700 to more than 1,800 elk killed annually. The largest kill ever recorded was in 1946. It wasn't that there were more elk or more hunters that year, but it was a year in which early snow conditions favored the hunter. There were 600 elk killed on my Ranger District alone that year.

If someone were to make the flat statement that more game had died of winter-kill and predators since 1930 than the recorded hunters' kill, I would be inclined to go along with the statement.

The Montana Fish & Game Department has done whatever they could, in cooperation with the Forest Service, to improve range conditions. Various systems of measuring browse plants have been advanced to determine the carrying capacity of the range. The problems of game management are recognized; but solutions in any large, roadless area are not easy. Cooperation between the Montana Fish & Game Department and the Forest Service has always been very good. The State is responsible for the game animals and regulation of hunting seasons and bag limits, while the Forest Service is responsible for the game animal habitat.

Perhaps, in the near future, management will be able to regulate the numbers of animals by hunter harvest rather than having the herd build up as a result of mild winters and then be reduced by starvation in severe winters.

Most of the big-game attention has always been focused on the elk, especially on the South and Middle Forks of the Flathead, the problem areas. However, there are today fewer elk in these problem areas. In those areas where timber harvesting is continuing, the carrying capacity of the range will increase; and there will be more game. The problem of providing winter range in these more accessible areas will never be as great as the problems that have for the past 30 years plagued the management of the back country.

The number of mule deer has not fluctuated as much as the elk and white-tailed deer populations. They are not as inclined to yard-up and become congested on their winter ranges. Also, they were never in as great numbers as were the whitetail or elk.

The whitetail have almost disappeared in the interior of the forest, where they were in competition with the elk. The very nature of white-tailed deer contributed to their downfall. They band up and winter together in large herds. Thirty years ago, the main deer yards were: Bowser Lake Area on the Tally Lake District; the Swan Valley floor above Swan Lake; Dry Parks Area of the South Fork, around Tea Kettle Mountain near Columbia Falls. These small areas could not support such large numbers year after year. As a result, the deer died of malnutrition.

Following a severe winter, Jack Lillevig and I made a trip into the Dry Park Area about the middle of April in 1936. We counted 180 dead deer in a half-mile stretch of the South Fork through the Dry Park deer yard. They had all died within the past 2 weeks. The 500 to 600 deer in this area that were alive were in poor condition. The deer had used this area as a winter yard for many years prior to this. There are no white-tailed deer using this area in winter today (1964). They have passed from the picture; the area is overrun with elk. Some of this Dry Park deer yard was flooded in 1953 by the Hungry Horse Reservoir, but the deer had been gone for some time before it was flooded.

There are quite a few deer left in the Flathead today, mostly in the foothills of the valley in scattered bands. They are held in check by regulated hunting.

Frequently, the question is asked, "Why didn't the Montana Fish and Game Department or the Forest Service provide feed for these starving animals?" The financing of such undertakings was a minor factor. It was determined long ago that when wild game are artificially fed, they immediately become dependent on this unnatural existence and quit foraging for themselves. They become more or less domesticated and unnatural in their habit. Herds would build up; the feeding job would grow accordingly and would soon be out of control. It has been demonstrated that it is better to leave them in their natural state, dependent on nature, rather than to start a program that would soon get out of control and have to be curtailed.

No historical record would be complete without considering the largest of our carnivorous animals, the grizzly bear. The Flathead Forest probably has more grizzly bear than any National Forest, with the exception of Alaska. It is estimated that there probably are 250 of these majestic animals in the Flathead Forest. They are concentrated mostly in the Bob Marshall Wilderness. Their numbers do not fluctuate as with most of our other big-game animals. Authorities are of the opinion that the number of grizzlies is gradually declining here, as they are in other areas. The reason seems to be a natural one, rather than an act of mismanagement. The grizzly has disappeared completely from the State of California. There were many in California a hundred years ago. They were protected in many areas of their natural habitat; for instance, in Yosemite National Park, created in 1892. At that time, Yosemite had many grizzlies, but the last grizzly bear seen in its natural habitat in California was in 1919-45 years ago

States, such as Colorado and Idaho, do not boast of their grizzly today. Perhaps the grizzly has outlived its usefulness as part of the biological balance of nature and is now becoming extinct, as have other creatures in the past. Perhaps it is in the natural scheme of things. It is extremely difficult to breed grizzlies in captivity. It is reasonable to predict that, sometime in the future, they will disappear as completely as have the saber-toothed tiger and other animals of the past. When this happens, they will be missed; and for fellows like me, who have spent many years in the back country, they will be missed in a very pleasant way. They wouldn't have survived as long as they have if it were not for the fact that they can hibernate during the deep snow period of winter.

Grizzlies were found originally in the western prairies and bushy area. They were driven into the mountains by civilization. They were first seen by the Lewis and Clark party on the Dakota prairies. The grizzly is the master of his domain and has sufficient strength and agility to do as he chooses, whether it be to kill an elk, a human being, break into a cabin, or wreck a packstring. Grizzlies are considered a trophy animal in Montana. The meat may be left in the woods; however, those of us who have eaten grizzly meat find it quite palatable. The Flathead Forest is open to hunting of grizzly bear subject to regulations of the Montana Fish & Game Commission.

Black and brown bear are numerous in the forest. Their numbers do not seem to have changed appreciably through the years. It is estimated that there are approximately 1,200 in the forest. They will be with us for a long time, damaging fruit trees, breaking into cabins, and wrecking tent camps. All wooded areas of the United States still have a few bear, which indicates they can thrive in spite of civilization.

The Flathead Forest is not especially favorable for moose. But there have always been a few in the marshy areas. The North Fork probably has more of these majestic animals than any other drainage. The Forest total is estimated at from 450 to 500 head. There are two species of moose in this area—the ones with light-colored legs and those with dark legs. There is a hunting season by permit only in most areas. This species of big-game animal seems to be holding its own.