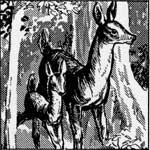 SPECIES of wildlife in national forests range from the great brown bear of Alaska to the Kaibab squirrel of Arizona and from the ptarmigan of Colorado to the wild turkey of Carolina. In national-forest waters, fishlife ranges from the golden grayling of Montana to the bream of Alabama and from the muskellunge of Wisconsin to the steelhead of Washington. Not only do the national forests provide at least a part-time home for 75 percent of all big-game animals remaining in the West, but they also afford some of the finest fishing in American waters. Many of the country's best trout waters are in national forests. Cold mountain lakes, clear fast-running streams and the slower rivers and meandering brooks provide habitat for a wide variety of fish, and fishing opportunities for millions.

Most common of all big-game animals in the forests is the deer; second in frequency comes the elk; and others are antelope;

Except in certain designated Federal wildlife refuges, State game laws apply to hunting and fishing in the national forests just as they do on surrounding lands. Information regarding open seasons and license fees can be obtained from the State fish and game department of the State in which the national forest to be visited lies. A number of States make available special low-cost, short term fishing licenses for sale to out-of-State visitors. 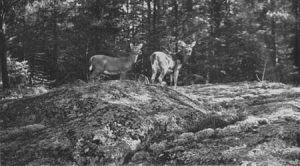 Doe and fawn in jackpine timber. Deer are the most common big-game animals in the national forests.—Superior National Forest, Minn. (F—371800)