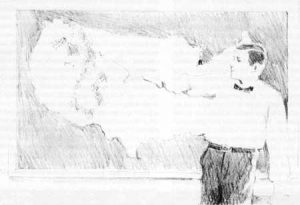 The real beginning of forestry work by the Federal Government came just 100 years after the Declaration of Independence,when Congress in 1876 authorized the appointment of a special forestry agent. During the next quarter century, the forestry movement was mainly a campaign of public education. Toward the end of the period a forestry policy for Government timberlands was established. Meanwhile,large-scale exploitation of timber resources continued.

1876 A special agent, Dr. Franklin B. Hough, a physician, statistician, and naturalist of Lowville, N. Y., was appointed by Frederick Watts, U.S. Commissioner of Agriculture, to gather data on the supply and demand for timber and other forest products for the present and future; to report on means successfully used abroad to manage forests, and means that may be used in this country to preserve and renew forests; and to investigate the influence of forests on climate.

A bill was introduced in Congress to insure preservation of forests of the public domain adjacent to the sources of navigable rivers and other streams.

1877 Congress granted its first appropriation,$6,000, to obtain information before establishing a Division of Forestry in the Department of Agriculture. Carl Schurz, German immigrant,statesman, and student, who became Secretary of the Interior in 1877,was among the first to propose and urge the establishment of Federal forest reservations, and the scientific handling of forests. In his native Germany forests were managed so that there was always a supply of wood. Trees were regularly and constantly replaced. He believed the same could be done in his adopted country.

Secretary Schurz and J. A. Williamson, a militant advocate of public forest control who had just become Commissioner of the General Land Office, completely reorganized the system of protecting and caring for public timberlands. District land registers and receivers were relieved of their timberland protection responsibilities. A force of special timber agents was organized and a drive was started against timber thievery and depredations on public lands. A new circular of instructions for timber agents was issued.

1877-83 Three comprehensive reports by Dr. Hough were submitted to Congress.

1878 The Free Timber Act and the Timber and Stone Act were passed by Congress. Until then there was no legal distinction between timberlands and other lands, and also no honest way to acquire public timberlands. The Free Timber Act gave the people of nine western States the right to cut timber at will on mineral lands both for domestic and mining purposes. The Timber and Stone Act authorized the sale of public land chiefly valuable for timber but unfit for agriculture and not previously offered for sale; the minimum price to be $2.50 per acre and the maximum area sold to one person,association or corporation, 160 acres. The impractical and unenforceable provisions in these laws resulted in unprecedented fraud and opened the door wide to wholesale forest cutting and destruction. For example,in 1885, the Government sought to recover the value of 60 million board feet of high-grade lumber stolen from public forests by a single California company.

A bill was introduced in Congress embodying the ideas of Schurz and Williamson, providing for the disposition and management of public timber and timberlands. All public lands bearing timber of commercial value would be withdrawn from sale or other disposal, and lands valuable chiefly for timber would be held by the Government to prevent waste and destruction by fire, and to assure continuous restoration and reproduction of the forests, with a gradual sale only of such trees as were most valuable as timber. An office of Forester would be set up in the Department of Interior, and the President authorized to appoint as many foresters at $2,500 per year as he deemed necessary for the proper care, custody, preservation and appeasement of the timber on the public lands. Fines of up to $1,000 and 1 year in prison were provided, plus double the amount of damage caused, for anyone convicted of willfully or negligently setting fire to any woods, prairie or ground in the public lands, or who permits any fire to pass from his property to that of another. The bill failed to pass.

The first State game commissions were established in California and New Hampshire. 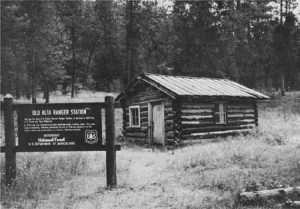 1881 The forest agency in the Department of Agriculture was made a Division of Forestry. It had no forests or forestlands under its control—it served only to find facts about forests and forestry. An agent was sent to Europe to study forestry there. In 1884, the duty of making experiments with timber was added to the work of the Division.

1882 An American Forestry Congress was organized, and held in Cincinnati, with Dr. Bernhard E. Fernow as secretary.

1885 The Biological Survey in the U.S.Department of Agriculture began as the Division of Economic Ornithology and Mammalogy. (In 1940 it became the Fish and Wildlife Service of the Department of the Interior. Cooperation with the Forest Service has been very close because of the relation of wildlife to the forests.)

New York was the first State to undertake public forest administration. It created the huge Adirondack State Forest Reserve in this year and set up a State forest commission which has continued in operation uninterrupted since then. A comprehensive fire control law was also passed.

Six bills were introduced in Congress for creation of forest reserves; none passed.

California created a State board of forestry.Colorado and Ohio took similar action later in the year.

1886 The Division of Forestry under Dr. Bernhard E. Fernow, a Prussian expert on forestry and the first formal chief of the Division, was given permanent statutory rank, in the U.S.Department of Agriculture.

1887 The Division of Forestry issued a"Report on the Relation of Railroads to Forest Supplies and Forestry." It estimated the vast amount of timber used in building and maintaining the railroads, and warned against exhaustion of our bountiful supply by wasteful cutting.

1888 An irrigation Division of the U.S.Geological Survey was established and the Secretary of the Interior was given authority to withdraw from private entry reservoir sites and other public land areas that in the future would be necessary for irrigation purposes.

Another comprehensive bill was introduced in Congress for the protection and administration of forests in the public domain.It provided for a Commissioner of Forests who would subdivide forest reserves into divisions and districts, organize a "forest service,"appoint forest inspectors or forest rangers, "establish a practical system of forestry," and make reasonable rules and regulations for the prevention of trespass, the control of forest fires, and the"conservation of the forest growth." This bill also failed to pass, but was another important step toward sound and progressive forestry legislation. It was drafted by B. E. Fernow.

A law was enacted forbidding timber trespass on Indian reservations.

1889 A law regulating the sale and use of dead timber on Indian lands, plus later amendments, was an important practical development in American forestry.

The American Forestry Congress presented a resume of timber trespass and timber thievery on the public lands to President Benjamin Harrison, showing that between 1881-87 over $36 million worth of timber was unlawfully taken from public lands and only about $475,000 worth recovered by the Government. A former Federal inspector prepared the report.

1890 The cutting of 20 million board feet of green timber annually on the Menominee Indian Reservation in Wisconsin was authorized by an act of Congress. This was the first Federal law regulating cutting of live timber on Government-managed lands.

Sequoia, Yosemite, and General Grant National Parks were created, all in the Sierra Mountains of California. Total area at first was 838,770 acres; eventually this was nearly doubled by addition of lands from adjacent forest reserves and national forests. (The General Grant Park was later changed to Kings Canyon National Park,which was finally combined with Sequoia National Park.)

1891 Beginning of the National Forest System:By act of Congress, approved March 3, the President was given power to establish forest reserves from the public domain (26 Stat. 1103). The provision was attached as a rider to a bill revising the land laws. On March 30, President Harrison created the first reserve—the Yellowstone Timberland Reserve, an area of 1,239,040 acres in Wyoming.These reserved lands are now in the Shoshone and Teton National Forests.

On October 16, President Harrison signed a proclamation withdrawing 1,198,080 acres in Colorado, known as the White River Plateau Timberland Reserve, now the White River National Forest.Before his term had expired, President Harrison set aside forest reservations totaling 13 million acres. No plan of operation was passed by Congress and the reserves were simply closed areas.

Maine authorized its State land agent to serve also as State forest commissioner with the duty to collect data on forest fire losses, forest waste, and on the reduction of forest area and its effect on watersheds. 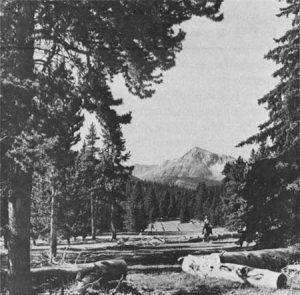 Gifford Pinchot was employed as the first professional American forester, on the Biltmore Estate of George W.Vanderbilt in the mountains of western North Carolina.

1893 New Hampshire set up a State forestry commission with responsibility for forestry education as well as authority to purchase land for public purposes.

Five more timberland reserves were set aside by President Harrison: Sierra, San Bernardino, and Trabuco Canyon in California; Pacific in Washington, and Grand Canyon in Arizona, for atotal of almost 13.5 million acres during his administration. President Grover Cleveland created the Cascade Range and Ashland Timberland Reserves in Oregon, aggregating over 4.5 million acres.

1895 Pennsylvania created the office of a State Commissioner of Forestry.

Dr. Carl A. Schenck succeeded Pinchot as forester on the Biltmore Estate.

1897 President Cleveland, just before the close of his term, proclaimed more than 20 million acres of new reserves. Soon after, Congress passed an act of organization and management for those public forests. It authorized the hiring of employees to administer the forests and made possible the opening of the reserves for use. This act of June 4, with later amendments, is the one under which the National Forests are now being administered. (Until 1905, the General Land Office in the Department of the Interior was in charge. The Division of Forestry gave technical advice. The Geological Survey was assigned the surveying and mapping of the forests.)