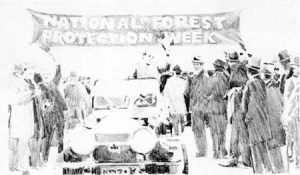 After World War I, cooperation in forestry work between the Federal Government, the States, and private forest-landowners developed rapidly. State forestry departments were expanded and strengthened. The period was marked by an increasing interest in forestry on the part of private owners. The National Forest System was further developed.

1920 Senate Resolution 311 called for a report on timber depletion, lumber prices, lumber exports, and timber ownership in the United States. The report prepared by the Forest Service, known as the "Capper Report," gave the most complete nationwide data on the forest situation up to that time.

The Forest Service made a cooperative agreement with the War Department for airplane forest patrol in California during the fire season. In 1925 it was expanded to cover Oregon, Washington, Idaho and Montana.

The Association of State Foresters was established to promote cooperation in forestry matters between the States, as well as with the Federal Government.

The National Forest district of Alaska was established, with headquarters at Juneau.

The Highway Act made separate appropriations for roads of general public importance and roads of primary forest importance in the National Forests.

The Appalachian (later named the Southeastern) and the Southern Forest Experiment Stations of the Forest Service were established.

1922 The Izaak Walton League of America was founded.

Congress also appropriated $10,000, the first money appropriated for the improvement of public campgrounds on the National Forests.

Congress authorized the Secretary of the Interior to protect and preserve from fire, disease, or the ravages of beetles or other insects, timber owned by the United States upon public lands,national parks, national monuments, Indian reservations, and other public lands. It also provided for cooperation with other Federal agencies, with States, and with private owners of timber.

Section 2 of the Clarke-McNary law authorized the Secretary of Agriculture to enter into cooperative agreements with the States for the protection of State and private forests against fire.State and private owners were to contribute not less than half the total costs. Other sections of the act provided for studies of forest taxation; cooperation with the States in the production and distribution of forest planting stock for windbreaks, shelter belts, and farm woodlands; and cooperative work in farm forestry extension. This law greatly expanded Federal-State cooperation in forest work, and gave a big impetus to the establishment and development of State forestry agencies. It was one of the important milestones in the advance of American forestry. It was a monument to Chief William Greeley.

The first Wilderness Area was set aside, in the Gila National Forest, New Mexico. Many others were added later throughout the West and in the East as well, for a total of more than 9 million acres dedicated to remain in their natural wild state, visited by man only on horseback, foot or by canoe.

1927 A Forestry Division was created in the National Park Service.

A cooperative board, called the Forest Protection Board, was established. It was composed of representatives of the National Park Service, the General Land Office, the Bureau of Indian Affairs, the Bureau of Biological Survey, the Weather Bureau, and the Forest Service. It was another advance in cooperation for the prevention and suppression of forest fires.

1928 The Woodruff-McNary Act was approved,authorizing a series of yearly appropriations up to a total of $8 million to carry out the provisions of section 7 of the Weeks Act of 1911 for the protection of watersheds of navigable rivers. Under this and various other acts, some additional land was placed in National Forests.

1929 The North Central National Forest District was established, with headquarters at Milwaukee, Wis. (Name was later changed to Lake States.) In 1930 all districts were changed to regions.

A Timber Conservation Board was appointed by President Hoover to find a remedy for the lumber industry, troubled by the business depression.

1930 The first Primitive Area was set aside in the National Forest System. Within 9 years 5.5 million acres of such wilderness-type lands were designated by the Chief of the Forest Service.

Great Smokies National Park was established in mountains of North Carolina and Tennessee.

The Knutson-Vandenberg Act (46 Stat. 527) authorized the expansion of tree-planting operations on the National Forests.

The Forest Service began the first complete surveyever undertaken of forest resources and conditions on the Nation's 648 million acres of forest land. When we entered World War II in 1941,about half the area had been inventoried. After the war ended, the survey was resumed.

1933 On March 21, newly inaugurated President Franklin D. Roosevelt sent to Congress his message on legislation to relieve distress, to build men, and to build up the Nation's forest resources. Ten days later Congress enacted legislation for the establishment of Emergency Conservation work, later called the Civilian Conservation Corps (CCC). On April 10 the first quota of 25,000 men was called, and on April 17, the first camp, Camp Roosevelt in the George Washington National Forest near Luray, Va., was occupied. During the 9 years the CCC program was continued, more than 2 million young men participated, and a vast amount of forest protection, tree planting,watershed restoration, erosion control, and other improvement work was accomplished. About 2-1/4 billion tree seedlings were planted. At the peak of the program in 1935, the Corps had 520,000 enrollees and 2,652 camps, of which 1,303 camps were assigned to forestry projects. The CCC program was ended in 1942, after the United States entered World War II.

Senate resolution 175 (72 d Cong., 1st sess., 1932)introduced by Sen. Royal S. Copeland of New York, called for a plan that would insure the economic and social benefits that could and should be derived from well-managed forest lands. Previous reports revealed testate of the forest without offering a plan for improving it. The Forest Service therefore prepared and sent to the Senate "A National Plan for American Forestry." This monumental report, printed by Senate order, is popularly known as the Copeland Report. The main recommendations for a satisfactory solution of the Nation's forest problem were: (1) A large extension of public ownership of forest lands, and (2) more intensive management on all forest lands. Earle Clapp, later Chief, supervised the Report.

The Soil Erosion Service (which in 1935 became Soil Conservation Service) and the Agricultural Adjustment Administration were established. These agencies developed large-scale programs for conservation of land and soil resources and helped many farmers improve management of soils.

1934 The Eastern National Forest Region was divided and a new region, the Southern, was created with headquarters at Atlanta, Ga.

The Taylor Grazing Act was passed June 28 "to stop injury to public grazing lands by preventing overgrazing and soil deterioration, to provide for orderly use, improvement and development,to stabilize the livestock industry dependent upon the public range." It applied to range lands in the public domain that had not been taken up for homesteads or reserved in national forests. These lands had had no management or protection, and were becoming progressively poorer.Administration was placed under the Department of the Interior.

Congress directed the Secretary of the Interior to make rules and regulations for the operation and management of Indian forestry units on the principle of sustained-yield management and to restrict grazing and take other measures necessary to protect the range on Indian lands. 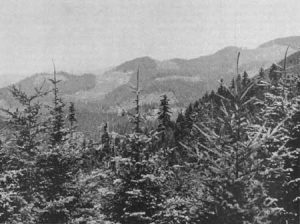 Figure 20.—Young trees reforest clearcut patches, such as those in the background. F—517963

1935 The National Resources Committee was established to investigate the country's natural resources and plan for their development and use.

The Soil Conservation Service was established in the Department of Agriculture to succeed the Soil Erosion Service of the Interior Department.

Congress passed the Fulmer Act to extend Federal aid to the States in acquiring State forests, but it was never used.

The first tree in the shelter belt program of the prairie plains region was planted near Mangum, Okla. This was the start of the Prairie States Forestry Project, to lessen drought conditions,protect crops and livestock, reduce dust storms, and provide useful employment for drought-stricken people. Under the project the Forest Service cooperated with prairie farmers in planting strips of trees at right angles to the prevailing winds on farms in the Dakotas, Nebraska,Kansas, Oklahoma, and northern Texas. The work was begun under Executive order of President Roosevelt, and later (1937) Congress passed covering legislation in the Norris-Doxey Cooperative Farm Forestry Act. In 7 years, more than 217 million trees were planted; 30,000 farmers participated in the program. In 1942, the project was transferred to the Soil Conservation Service to be continued as an activity of the soil conservation districts. Many benefits have been derived from the program. Other countries have set up similar projects.

1936 Complying with a resolution of Sen.George Norris of Nebraska (S. Res. 289, 74th Cong., 2d sess.), the Forest Service prepared a report on the western range (mostly in the public domain) and methods of improvement. It incorporated information obtained by many years of research on range and watershed problems, by special surveys, and by 30 years' administration of National Forests.The region was found badly depleted by continuous overgrazing.

The Omnibus Flood Control Act provided for survey sand improvements of watersheds for flood control. It recognized that proper forest and range management stabilizes stream flow and reduces flood and erosion damage. The watershed work was to be done by the Department of Agriculture.

The Naval Stores Conservation Program was authorized under the Soil Conservation and Domestic Allotment Act. The program provides payments to turpentine producers who work their timber according to approved conservation practices.

An act to provide for sustained yield management by the Department of the Interior of the revested Oregon and California Railroad and reconveyed Coos Bay Wagon Road grant lands in the State of Oregon was approved (50 Stat. 874). (When these lands, comprising 2,681,000 acres, had been repossessed by the Government, the Revestment Act of 1916 and subsequent legislation provided for the timber assets to be sold without any provision for maintaining timber productivity.)

The Secretary of Agriculture set aside the northern part of the Superior National Forest in Minnesota, 640,000 acres, as a Road less Area, becoming part of the National Forest Wilderness system in 1939. Later the size was increased to 886,000 acres, and renamed the Boundary Waters Canoe Area. It adjoins the huge Quetico Provincial Park of Canada.

1938 President Franklin D. Roosevelt, in a special message to Congress, requested a study of the forest situation in the United States, particularly with reference to privately owned forest lands. Congress then authorized a Joint Committee on Forestry to conduct such a study. Its report, known as the Bankhead Report, was issued in 1941.

The New England hurricane in September 1938 blew down millions of trees. A Northeastern Timber Salvage Administration was promptly set up, under the supervision of the Forest Service, to salvage as much as possible of the blown-down timber. By 1941 more than 700 million board feet of timber had been salvaged. The large amount of down timber greatly increased the fire hazard, and the Forest Service and the State forestry agencies also cooperated in the huge job of reducing this danger.

1940 The Lea Act authorized the Secretary of Agriculture to provide for the nationwide coordinated control of white pine blister rust.

1941 Following a 3-year study, chiefly of private forests, the Joint Congressional Committee on Forestry, under the chairmanship of Senator John H. Bankhead of Alabama, issued a report on "Forest Lands of the United States." The report cited deplorable conditions in the forest areas of many sections of the country, and recommended "the establishment of a real forest economy in this country which . . . will put to constructive use one-third of our total land area." The report recommended various cooperative aids to private forest-land owners, expansion of public ownership, and a Federal-State system of regulation of forestry practices.

The "Tree Farm" program, sponsored by forest industries, was started in the Pacific Northwest.

This year marked the 50th milestone in the National Forest System.