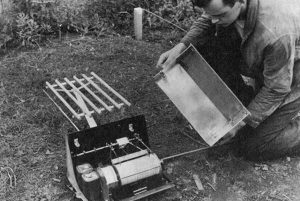 George Jemison checks readings on the anemohygrograph, developed by Harry Gisborne and Matt Dunlap (of the Forest Service's Forest Products Laboratory in Madison, Wisconsin) around 1930. The anemohygrograph measured moisture levels in wood fuels, wind speed, and relative humidity in forest duff (small organic debris). The parallel wooden dowels protruding from the unit were of a standardized size and weight, which increased or decreased depending upon how much moisture (from precipitation or humidity) they absorbed. Gisborne designed the dowels to represent similarly sized sticks common in the adjacent forests and correlated moisture content in the dowels to fire danger. Unfortunately, the anemohygrograph required a full-time technician to keep it functioning accurately and cost more than $300 per unit, so had only a short research life. 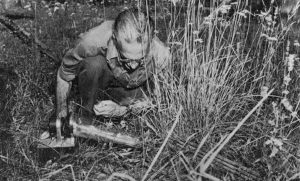 A psychrometer is essentially an instrument with two similar thermometers -- one of which is kept wet -- so that evaporative cooling causes a lower temperature in the wet one. The difference between the readings provides a measure for atmospheric humidity. To build the Asman aspirator psychrometer, Harry Gisborne inserted thermometers in a long plastic cone, with a small opening at one end and a motor-driven fan at the larger opening (shown above). The narrow end of the cone was placed at the base of grasses, then the air was pulled from the plants and past the thermometers in order to measure humidity and plant moisture or, by extension, risk of flammability. Asman psychrometer readings were taken at the Priest River Experiment Station for approximately ten years starting in the 1940s. 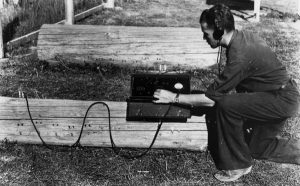 In order to assess moisture conditions in large logs, Harry Gisborne, Lloyd Hayes, and Chuck Wellner (pictured above) at the Priest River Experiment Station inserted copper wire electrodes into 10- and 12-inch logs of western white pine. By measuring the electrical resistance between the wires, the researchers could determine moisture content within the logs. Although this "Blinkometer" proved vulnerable to varying weather conditions that cracked logs during dry spells or saturated the wire contacts when rainy, Lloyd Hayes managed to gather enough data from the rig to include some of the results in his master's thesis for a forestry degree from Yale in 1940. The Blinkometer was used from 1935-1943, after which Gisborne and later fire researchers switched to systematically weighing large logs, which they measured much like the smaller dowel arrays on the anemohygrograph. 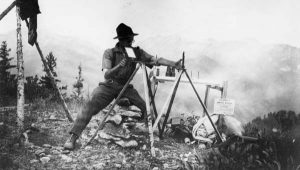 Heliographs reflected sunlight with mirrors and were used successfully by the U.S. Army into the early 20th century in the sunny Southwest. The double tripod heliograph included multiple sets of mirrors with a shutter for clicking out Morse code or other messages, but the devices were awkward to manage and were not reliable in cloudier regions such as the Pacific Northwest. In the photo above, a young Harry Gisborne demonstrates his heliographing technique at Tip Top Mountain lookout, in the Wenatchee National Forest, Washington, in 1915. 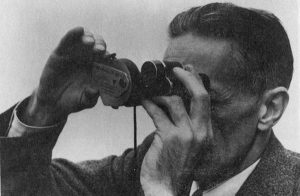