Parachuting Into History: Smokejumpers Land In DC For First Time

On this date in 1949, four Forest Service smokejumpers made the first jump east of the Mississippi River and the first parachute jump ever made onto the Washington Ellipse, the oval park between the Washington Monument and the White House. The jump was even televised, which is how President Harry Truman reportedly watched it, even though he would’ve had a clear view of the historical event if he’d stepped out on the Executive Mansion’s balcony.

The smokejumpers had taken three days to fly out from their base in Missoula, Montana, on a Ford Tri-Motor. Why so long? The airplane’s top speed was 90 mph. Homer W. “Skip” Stratton later recalled 50 years later in an interview with The Missoulian, “If we got a head wind, we could see cars and trains passing us down below.” Of the jump, he remembered they came in so low they were about eye level with tourists looking out from the observation windows of the Washington Monument, which are 500 feet up: “We were waving at each other.” 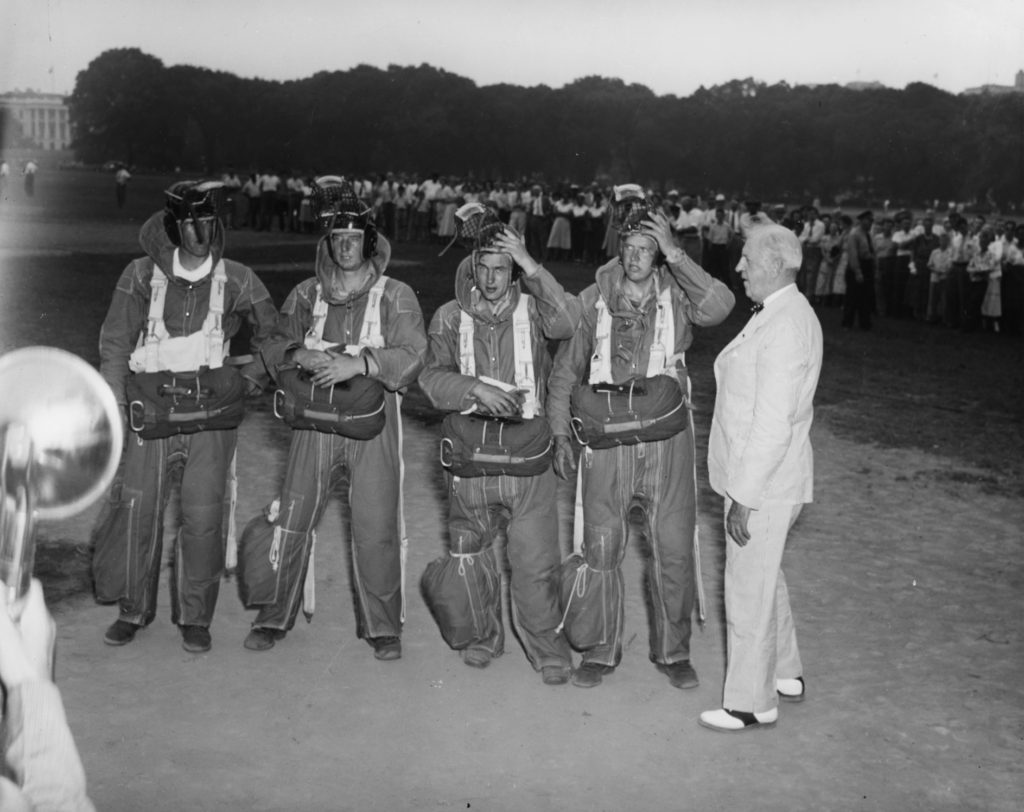 The first two men to hit the silk were Stratton, 27 years old, and William D. Dratz, 26. On a second pass, Edward J. Eggen, 26, and William D. “Bill” Hellman, 23, jumped and landed in the middle of the Ellipse. Hellman had become a new father while on the trip. His son was born the day before the DC jump.

With no forest fire to attack, smoke pots were lit to provide some sense of excitement for the smokejumpers and the hundreds of spectators who turned out to watch. The Washington Post reported the next day, “It wasn’t an invasion, citizens, it was the United States Forest Service demonstrating how its smoke-jumpers fight forest fires in remote sections of the West.” Interestingly, the day before this leap into history the newspaper characterized their job as putting out fires “inaccessible to automobiles,” a indication of how new the concept of smokejumping was.

The jump was arranged by the American Forestry Association (now American Forests), which was hosting a luncheon at the National Press Club “honoring American business for its advertising support in the fight against forest fires through a public service campaign sponsored by the Advertising Council,” according to an August 1949 article in American Forests magazine. The Forest Service hoped the event would generate continued support for its fire prevention campaign and the smokejumper program. After landing, dozens of reporters swarmed to take photos of them and ask questions. Stratton recalled, “The questions were just crazy. What does it feel like? Do you jump right into the middle of the flames? Crazy stuff.”

Then the four men got into two convertibles and rode down Pennsylvania Avenue to the luncheon, where the smokejumpers gave plaques to business leaders on behalf of the Agriculture Department. The men were a big hit in Washington, especially Eggen, the only bachelor of the group. “Ed was the favorite of the women at the Agriculture Department,” Stratton remembered. “He was this big handsome guy with blond hair and a great smile. They pretty much had him surrounded the whole time we were in Washington.” Afterward, they quickly returned to Missoula and to work. Fire season was well underway.

Some readers might recognize the name of Bill Hellman. Just six weeks later, Hellman would be one of 12 jumpers killed in the Mann Gulch fire, another, though unwelcome, first for the Forest Service smokejumpers.