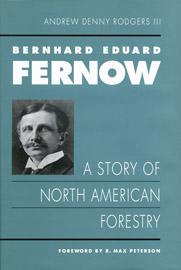 A biography of Bernhard Eduard Fernow, the leading American forester from his arrival in the United States in 1876 until his death in 1923. The first professional forester in North America, Fernow laid the foundation for what would become the U.S. Forest Service. He was the founding dean of Cornell’s first forestry school and the University of Toronto’s forestry school. Fernow also established Forestry Quarterly, predecessor of the Journal of Forestry, and also served as president of the Society of American Foresters. Helping establish forest management and forestry education in the United States and Canada, Fernow stands as a pivotal figure in North America’s forest and conservation history.