A Look Back at George Washington’s Birthday Trees

“Ten million monuments to a great man!” So went the call out from Charles Lathrop Pack and the American Tree Association to the American public. The “great man” was George Washington and the year was 1932 – the bicentennial of Washington’s birth. Mired in the midst of the Great Depression, Americans were nonetheless still in the mood to honor their history. Activities took place across the country in celebration of America’s first president, many of which were years in the making as President Coolidge had first established a commission to oversee the bicentennial of Washington’s birth back in 1924. These celebrations included events, parades, and speeches, as well as the redesign of the quarter to feature the now-familiar profile of Washington on the front of the coin for the first time. 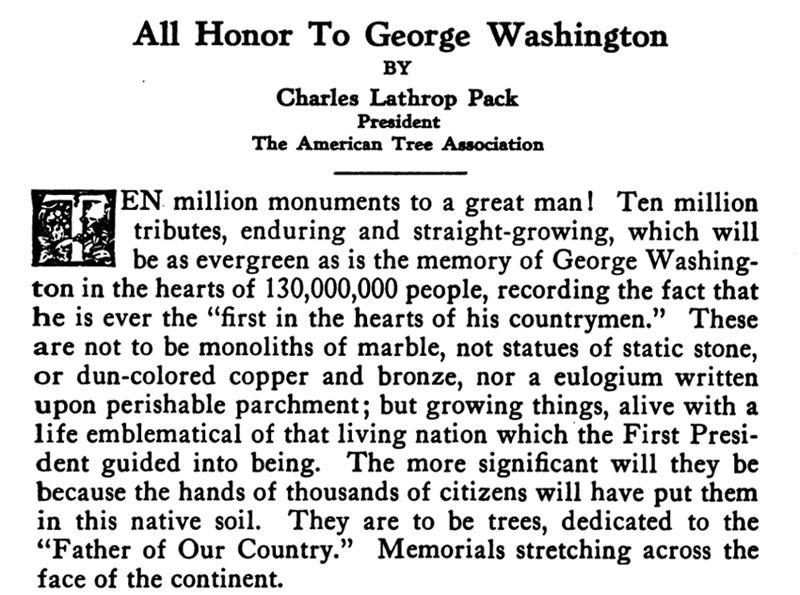 The American Tree Association took advantage of this patriotic fever to promote their cause of reforestation. The organization distributed a book (creatively titled “George Washington Bi-Centennial Tree Planting”) to help spur memorial tree planting in Washington’s honor throughout the country. The publication included helpful instructions on how to perform successful roadside and ornamental planting operations. Local organizations across the country followed suit, and numerous memorial tree planting events were held throughout 1932. 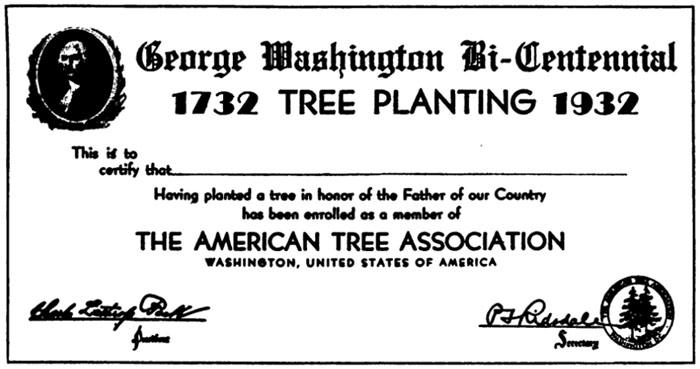 A visual record of these efforts on the local level can be found in our North Carolina Forest Service Photograph Collection. The collection includes a number of images documenting Washington bicentennial tree planting events in Raleigh during the month of February, 1932.

On February 13th, Raleigh Boy Scouts gathered to plant approximately 1,700 seedlings on Lake Johnson, the Raleigh municipal watershed, as part of the George Washington bicentennial celebration. The Scouts’ planting project was sponsored locally by the Wake County Chapter of the Izaak Walton League of America, with the cooperation of the State Department of Conservation and Development. The group planted pine and locust seedlings in efforts to help reforest the eroded land bordering Lake Johnson. 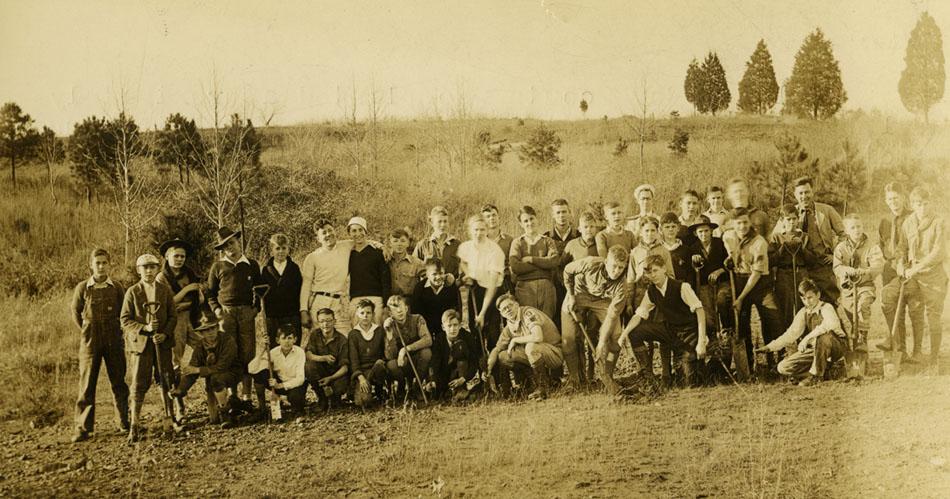 More formal events marked Washington’s actual birthday on February 22nd. At St. Mary’s School in Raleigh, a special tree planting ceremony was held in front of the school in honor of the bicentennial. Planted was an oak tree, grown in Culpeper County, Virginia, the same county where in July 1749, a 17-year-old George Washington was commissioned as the first county surveyor. State forester J.S. Holmes helped direct the planting of the tree and students from St. Mary’s read poems and gave speeches. 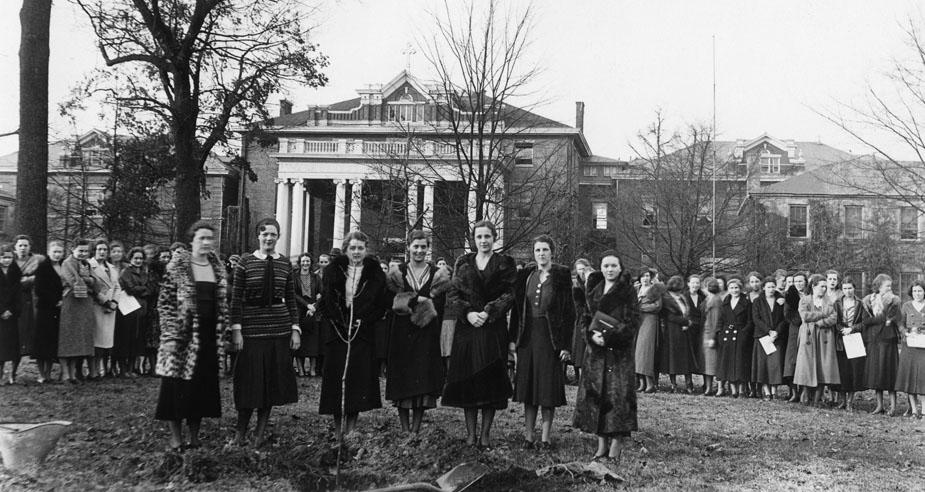 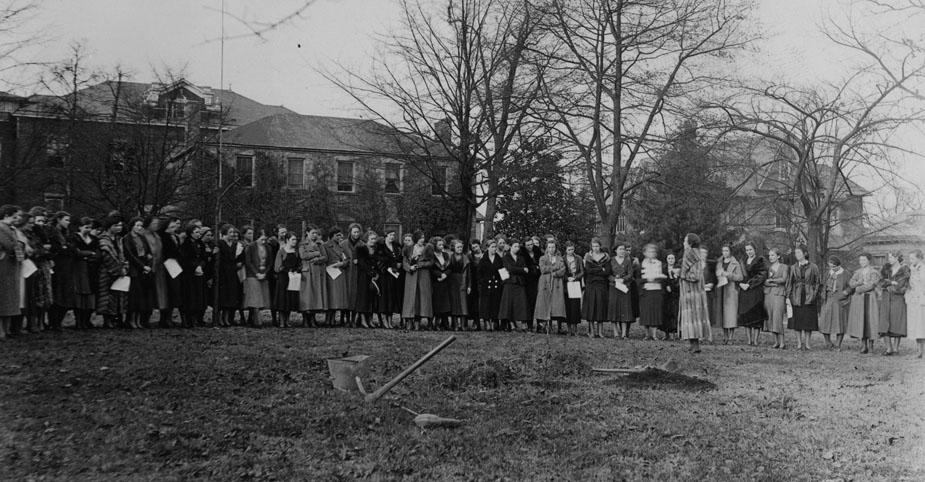 Just a few blocks away from St. Mary’s, another memorial tree planting took place in Raleigh on the same day. In the afternoon of February 22nd, a ceremony took place in front of the historic Joel Lane House (Lane is considered “The Father of Raleigh” for having facilitated the location of North Carolina’s capital city on his land in 1792). Sponsored by the local chapter of the Colonial Dames of America, the event featured a ceremonial planting as well as speeches, patriotic songs, and tributes to Washington from the steps of the Colonial era house on West Hargett Street. The highlight of the ceremony was the planting of a Ginkgo tree from the state nursery along with ivy brought from Mount Vernon. 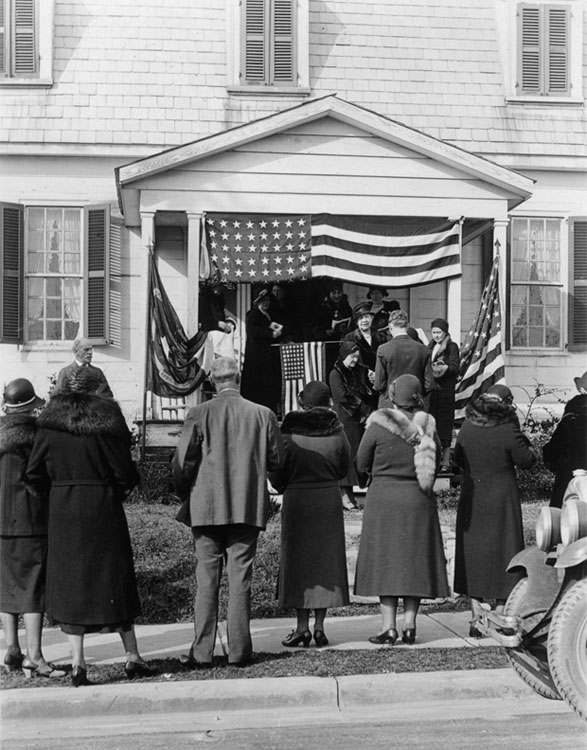 Washington Bicentennial tree planting by the Wake County committee of Colonial Dames in front of the Joel Lane House. 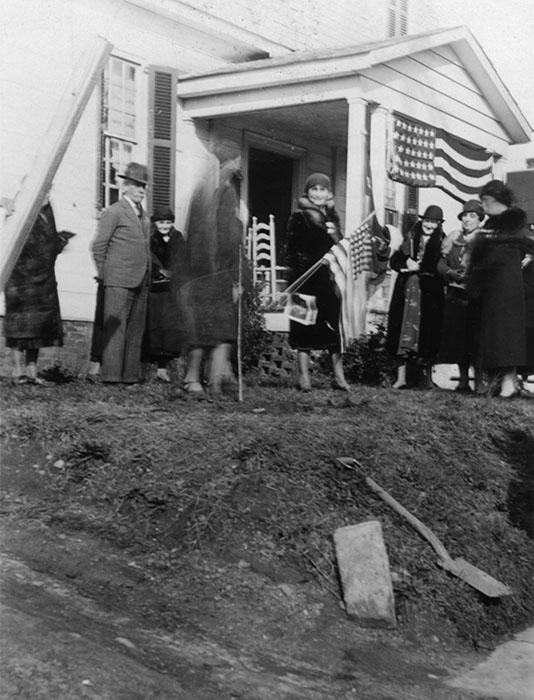 For more information on the North Carolina Forest Service Photograph Collection, see the online finding aid, and browse a selection of digitized items through our Image Database. A portion of the collection can also be accessed online via DigitalNC.