In the Wake of the Ottumwa Belle: From Crisis to Conservation

On the 100th anniversary of the last log raft floated on the Upper Mississippi River, scholar and Aldo Leopold biographer Curt Meine reflects upon conservation efforts over the last century and the challenges that lay ahead.

This summer marks an obscure anniversary in the history of conservation. In August 1915 a large raft of white pine lumber was floated down the Upper Mississippi River from Hudson, Wisconsin, to Fort Madison, Iowa. For those on board and those watching from shore, it was a ceremonial occasion, an elegiac gesture. For decades, from Maine to western Ontario, white pine logs and lumber had been transported by water to downstream sawmills and rail towns. In northern Minnesota, Wisconsin, and Michigan the cut crescendoed in the decades after the Civil War. At the peak of the industry in the 1880s, some 500 rafts of white pine came down the Mississippi each month.  But with the exhaustion of the “inexhaustible” pineries, there was no more big pine to float. The pine boom was over.

And so the lumbermen organized one last raft for nostalgia’s sake. The steamboat Ottumwa Belle, under Captain Walter Hunter, guided the raft around the great river’s bends.  At Albany, Illinois, it paused to take aboard 93-year-old Stephen Beck Hanks, famed riverman and cousin to Abraham Lincoln. In 1843 Hanks had guided the first raft of white pine logs downstream, from the St. Croix River pinery at Stillwater down to St. Louis. In the words of river historian Calvin Fremling, “Hanks has seen the whole thing—the beginning, the culmination, the end—all in one man’s lifetime.” 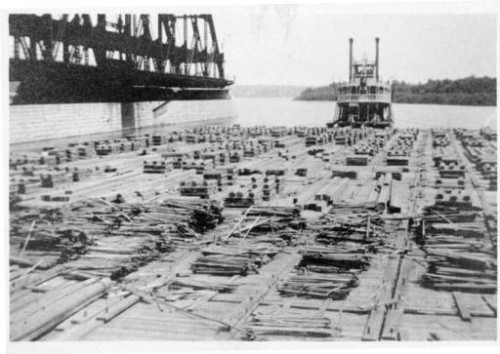 As that final raft slipped downriver, it left in its symbolic wake a region of ruin: some 50 million acres of cutover and burned-over stump fields; soils sterilized by fire and eroded into gullies; streambeds and riverways altered by scouring and heavy sediment loads; disrupted and depleted fish and wildlife populations; a scattering of boom-and-bust work camps and abandoned lumber towns; and a legacy of concentrated wealth, political power, and corruption. The very landscape of unsustainability.

Across the continent the pattern repeated itself, varying by landscape and resource: the alienation and removal of Native American people; an advance wave of speculation and maneuvering; an onrush of hopeful opportunists; the manipulation of laws and courts; the recruitment of cheap, abundant labor; the winnowing of economic winners and losers; the consolidation of wealth into cartels; the channeling of that wealth into political power and authority; a compliant host of publicists and newspapers; the co-opting of the mechanisms of representative government.  And always the same legacy: degraded landscapes and exhausted sources of wealth; communities inflated by the booms and drained by the busts; citizens left to clean up the messes and to create more sustainable places and economies.

And, finally, always, the same question: can democracy find a way out of the crisis, right itself, reclaim some equilibrium between private wealth and commonwealth, between self-interest and the general welfare? Like the other booms, the pine boom yielded immediate prosperity, but at the price of destabilized and distorted ecosystems, social systems, and political systems. All too many of those who had reaped the quick profits had scant concern for the vitality and resilience of the forest (or prairie, or river, or range, or fishery) or the health of the democracy that provided their opportunity.  In the absence of economic self-restraint, social constraint became inevitable. In the face of crisis, there was no alternative.  Reckless economics and devastated landscapes will do that to an ideology.

Now, as the full scope of the climate crisis becomes evident, the question arises again: Can democracy respond? The story of the white pine offers some hope. As the big pine (and redwoods, and passenger pigeons, and bison) dwindled, reformers of varied political backgrounds and stripes found common cause and enacted reforms. We called it conservation. Over time the forests of the Upper Mississippi River and Great Lakes returned as the soils, waters, plants, and animals went about their collective work of self-renewal. That recovery continues, more than a century after the Great Cut. The region has hardly achieved sustainability. There is always some short-term economic fix, some new scheme to begin yet another round of heedless exploitation of the waters, the minerals, the forest. Yet, starting a century ago, citizens overcame political inertia in a way that made long-term positive change possible, and inaugurated the modern search for what George Perkins Marsh called “a wise economy.”

Climate disruption, though, is a crisis of a different order and magnitude. It is not local or regional in scope, but global. It is a crisis, not of a certain stage or kind of economy, but of the entire fossil-fuel-dependent meta-economy that spans the globe, that has been expanding since the dawn of the industrial age, and that actively resists envisioning alternatives to its own continued domination. The resulting concentration of wealth now flows directly toward unprecedented political power. Especially in the aftermath of the U.S. Supreme Court’s 2010 Citizens United decision, that power has few institutional checks on its momentum or direction. The climate crisis and the democracy crisis are now two names for the same thing.

Just as the Ottumwa Belle’s historic journey signified change in its time, indicators of transformation mark our moment: activists gathering by the thousands to speak out against the epic exploitation of Canada’s tar sands; Pope Francis releasing his encyclical Laudato Si’, defining a moral imperative in the Catholic tradition to conserve “our common home”; international climate policy negotiators making plans to gather in Paris later this year; presidential candidates calibrating their messages and calculating their impact. All, in their way, reveal that the fate of our democracy and the future of our climate are inseparable. If there is any positive side to all this, it is that as we work to address the one, we must inevitably deal with the other.

Curt Meine is senior fellow with the Center for Humans and Nature and the Aldo Leopold Foundation, research associate with the International Crane Foundation, and associate adjunct professor at the University of Wisconsin–Madison. He is editor of the Library of America collection Aldo Leopold: A Sand County Almanac & Other Writings on Ecology and Conservation (2013). This essay is a contribution to the Center for Humans and Nature’s “Questions for a Resilient Future” series, “Can democracy in crisis deal with the climate crisis?”