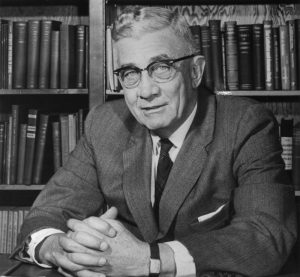 American historian Theodore C. Blegen was one of the founders of the Forest History Society (FHS). His vision and dedication to FHS never waned from the time of its inception in 1946 until his death in 1969.

To honor the significant contributions of Blegen to the Society, FHS established the Theodore C. Blegen Award in 1973. The award recognizes the best scholarship in the fields of forest and conservation history published in a journal not produced by the Forest History Society.

Theodore Blegen was born on 16 July 1891 in Minneapolis, Minnesota. During World War II he directed the National Historical Service, preparing materials for the U.S. Army's G.I. Roundtable. In 1928–29 he was a Guggenheim Fellow and studied in Norway. He served as a professor of history at Hamline University, was superintendent of the Minnesota Historical Society, and was elected president of the Mississippi Valley Historical Association (now Organization of American Historians).

Blegen was dean of the University of Minnesota's graduate school when he conceived of a plan for systematically collecting and preserving the sources of forest history in the Lakes States. He began seeking funds to support the project, and industry representatives such as the Weyerhaeuser family of St. Paul, Minnesota, and Tacoma, Washington, heeded the call. The Forest Products History Foundation (now Forest History Society) resulted from this initial effort to preserve the history of the American forest products industry.

Blegen was a director or corporate member of the Society from its inception in 1946 until his death. He served two terms as president, was elected a Fellow of the Society in 1963, and for more than twenty years served on the Society's executive committee. Upon hearing of his passing away on 18 July 1969 after a long illness, FHS executive director Elwood R. Maunder urged the FHS Board of Directors to establish a memorial endowment fund to carry on Blegen's support for young scholars of American history who research, write, and publish studies relating to forest history. The Society's Theodore C. Blegen Award was thus born.